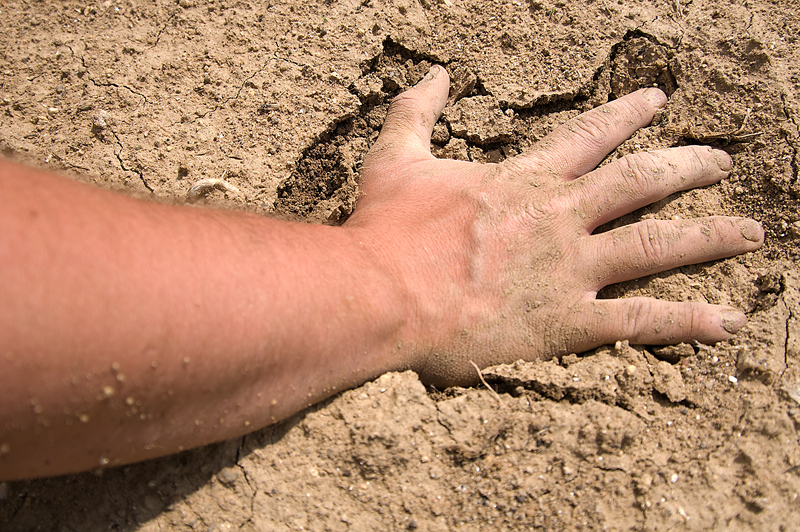 Missouri has not escaped the historic drought that devastated Texas, Oklahoma and Arizona.  A critically-timed two month dry spell has left much of the state’s soil bone dry down to nearly six feet.  Unless there is long and heavy rain and snowfall this winter, Missouri’s most important crops will suffer.

Randall Miles, associate professor of soil science at the School of Natural Resources, University of Missouri, said five feet down in most Missouri soil, where the roots of crops get their moisture and nutrition, is dry almost to the point of desiccation. 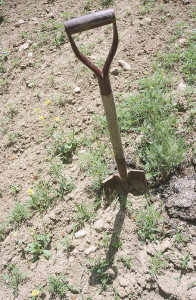 Miles estimates that it will take 16 to 18 inches of rainfall this winter – double that of a normal season – to replenish enough soil moisture to assure good crops.  As ten inches of snow equals one inch of rainfall, that will mean up to 13 feet of snow will need to fall.

And that moisture can’t fall in big gulps.  “We estimate that half of moderate or heavy rain or snow runs off and doesn’t penetrate into the soil,” Miles said.  “Ideally, we need a long-term drizzly kind of rain or snow to replenish the soil for it to have enough residual moisture available for use at planting and harvest.”

Without this rain, Missouri farmers could see dramatically reduced yields.  Miles is the director of MU’s Sanborn Field, one of the oldest agricultural research plots in America.  In the late 1980s during a similar dry spell, soybean yields at Sanborn were only 115 bushels per acre compared to 123 bushels during a year with good rainfall.

“Missouri has more than 5 million acres of soybeans, so even though that four bushels per acre doesn’t sound like much, it adds up to about $300 million in lost value,” said Mike Collins, director of plant sciences with MU’s College of Agriculture, Food and Natural Resources.

Crops depend on subsoil moisture, especially during these hot and dry periods, Collins said. When rain stopped falling in June, corn almost immediately felt drought stress during the critical silking periods, ears struggled to fill out fully and some soybeans looked more like BB’s than beans in their pods. 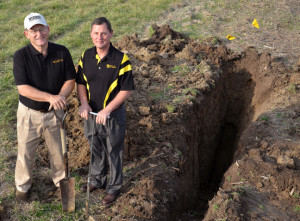 Collins points out that it is not widely known that in October the USDA designated 101 Missouri counties as natural disaster areas due to drought. The lack of rain and excessive heat occured between July 1 and Aug. 30.

A Little Rain Won’t Be a Big Help

“People think that if we get a few good rains that the problem is solved,” said Miles.  “Those rains will only put moisture into the first few inches of soil.  We’ll need extraordinarily persistent rains for the moisture to get down five feet where the roots of mature plants live. It could take many weeks and months for water entering the soil surface to move into the three to five feet depth of the soil profile,” he said.

Unlike Nebraska and other states with readily available ground water, Missouri is not set up for large scale irrigation.  Farmers can’t compensate for too little water with more fertilizer or other additives.

The stakes are huge.  Three million acres of corn are harvested in Missouri each year – the state’s second largest crop.  Annual average value of Missouri corn is almost $1.7 billion, according to the USDA.

Soybeans, an almost $2 billion commodity for the state and planted later in the year than corn, will probably also see lower yields if steady and persistent rains don’t come to Missouri.

Winter wheat, being seeded now, may not be able to germinate fully and thrive if dry conditions persist.  To establish themselves, they need water closer to the soil surface, Miles said. Later, as the roots grow deeper, the plants will need moisture at deeper levels.

The lack of recent rainfall is having an impact on Missouri’s important cow-calf production, too. Many ranchers are not selling their surplus hay figuring that forage will disappear early this year because of the dry conditions.  Some are considering culling animals as was done in drought-stricken Oklahoma and Texas.

“For consumers, expect the price of corn and meat to increase,” Miles said.

Will a Bad Winter Be a Blessing?

A brief spell of rain that occurred in November will only mask the problems that could occur later at harvest, Miles said.  “Early plant growth will start well and look healthy if we get some moisture,” he said. “But, unless there is sufficient rain to penetrate five feet down, the plants will not have the moisture they need to develop fully and deliver a decent yield.”

“I know no one likes the idea of a harsh winter,” Miles said. “But a really long and snowy winter may be a blessing in disguise this year.”

>>Listen to the audio feature