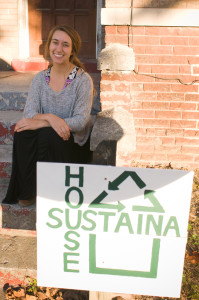 Monica Everett is a connector. Whether she’s articulating the connections between food systems and the environment or bringing Campus Dining Services and the Wellness Resource Center together to partner on getting healthy food on campus, the junior sustainable agriculture major bridges topics and brings people together to collaborate.

Her leadership on campus was recently recognized on a national scale. She was a finalist for a Real Food Challenge Student Activist of the Year Award.

“What stands out to us at Real Food Challenge about Monica is that she really knows where she comes from and why she works on food issues,” said Nina Mukherji, director of programs with the Real Food Challenge.  “She’s making real change in a way that is personal and she brings that to other people.  Her approach to activism is about building relationships and finding allies, rather than approaching people in an antagonistic way.  She is awesome at working with people, developing leadership and inspiring others to act on their values as she does.”

Because of the open, honest dialogue Everett has helped foster, she’s been able to partner with Campus Dining Services on a number of initiatives, including spearheading MU’s participation in the first ever Food Day on Oct. 24. Everett also created informational materials for the can the waste campaign to reduce food waste at MU, where approximately four ounces are tossed by each student at each meal—leading to 250 tons of food waste tossed in the trash each year. Researchers, students, faculty and staff took notice of that valuable waste stream on Nov. 18 when the Bradford Research Center received its first load of food waste from Rollins Dining hall as part of a zero carbon, closed-loop compost and vegetable production system.

“Monica has been a champion of some of the things we’re doing and she’s been great and sharing that with the larger Mizzou community,” said Eric Cartwright, executive chef for Campus Dining Services.  “She has an open mind and a willingness to learn and understand where we’re at and our perspective, and then shares her insight from a concerned student’s perspective.”

Everett researched all the Missouri vendors for Campus Dining Services’ Taste of Missouri annual dinner event. Her efforts helped enhance students’ connection to their food sources. “It’s been neat to watch her mature and see her actions and efforts continue. She just really believes in making the right choices and is going about it the right way,” Cartwright said.

A passion for food and its intersections with community and sustainability has driven Everett since her arrival at MU. Shortly before coming to MU, her mom took to see the movie Food Inc. “Before that I didn’t realize how the food system was impacting the environment and our health. I saw that and I was like I’m never eating fast food again. I changed a lot of things after that,” Everett said.

Everett knew she wanted to work on environmental issues in college but wasn’t really sure how. “I was lucky to get a job with Student Sustainability at the MU Sustainability Office as a freshman,” she said. 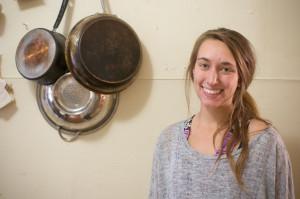 Registration for the event filled up in just three days. Everett invited Campus Dining Services to be a stakeholder in the event. Steve Simpson, associate director of Campus Dining Services and Eric Cartwright, executive chef for CDS, shared information about CDS’s EarthRight initiative, such as spending more than 15 percent of their budget on local foods.

Out of the two-day event, Everett formed Mizzou Food Coalition, a group “working to reconnect students, faculty and staff to their food sources.”

Everett recently championed the role of food coordinator for her household of six students living striving to live sustainably in the Sustainahouse. She and her housemates are raising two chickens for eggs, grew tomatoes at a community garden this fall and shop each Sunday at the new artisan and farmers market at Wabash Station. They also buy some foods, such as beans in bulk from Blue Planet. Sustainahouse is a team effort to live sustainably on a budget. They monitor their energy consumption, haul food scraps to Columbia Center for Urban Agriculture’s compost facility and line dry their clothes—activities that save them money and help improve local soil nutrients.

“We almost always cook dinner together and usually have leftovers; we keep the meal price between $2-6 per person,” Everett said. “It takes a little more effort than eating ramen, but it’s and healthier a lot tastier too. Cooking is one of my favorite things about living here.” Everett said being more connected to her food means experiencing it from where it’s grown, bringing it into her house, learning about it, cooking it and sharing it with a community. 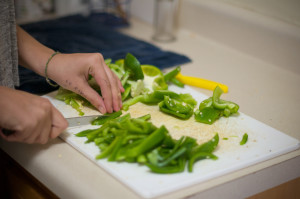 Last year Everett went on a field trip for Science and Agricultural Journalism Professor, Bill Allen’s “Field Reporting on the Food System and the Environment” class. Ironically, the reporting class led her to switch from Science and Agricultural Journalism to Sustainable Agriculture. Everett said wanted to get more directly involved in agriculture. “I saw how food is being produced by farmers and how consumers are getting it, the distribution centers—seeing all the parts of the system was an eye-opening experience,” she said. Everett was especially impressed by the Old North Neighborhood restoration project in St. Louis, a project CAFNR and MU Extension collaborated to make happen.

“Seeing all the parts of the food system made me realize I wanted to work in it rather than write about it,” Everett said.

Everett gained hands-on farm experience last summer at Earth Mountain Education Farm in Weston, Col. She labored in the field, pulling weeds, planting and watering vegetables, milking a goat, cooking and even building. Because the farm is at 8,000 ft., she helped construct an earthen tire wall to shield their tomatoes from wind. She also taught traditional skills, such as leather working, making homemade bread and took kids on hikes to experience and collect medicinal and native plants. She brought those skills back to her dad’s garden near Kansas City and is helping him transition to organic growing practices.

Everett hopes to grow food and work in food policy after graduation, maybe in the U.S. or possibly abroad with the Peace Corps. She’ll continue to apply what she’s learned through hands-on experience and in CAFNR classes. She’s currently enrolled in rural sociology Professor Mary Hendrickson’s Community Food Systems class. “I’m always amazed and inspired by her knowledge, Everett said. “She forces you to ask tough questions of yourself and about the food system and what we’re learning. You’re not just being fed. No matter what I say she always has a bunch of questions about it.”