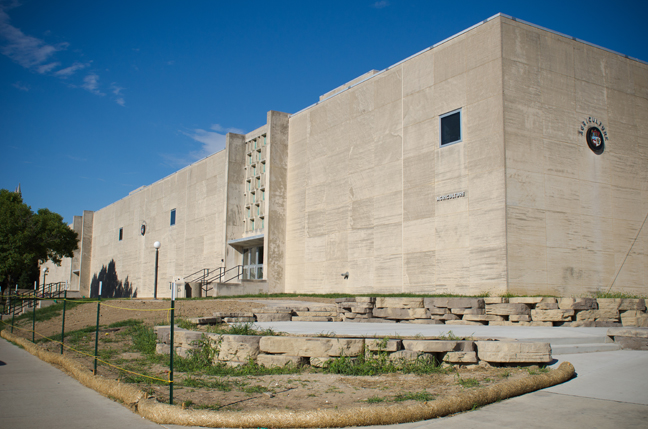 This fall, a bit of beauty was unveiled on the southwest corner of the Agriculture Building on the Mizzou campus. A new patio and some greenery is the first major change to its exterior since it opened during JFK’s administration.

This little bit of style, designed as a Capstone project by Justus Lacewell, is welcome. Derided for its absence of windows, bleak appearance and lack of a discernable visual connection to other MU structures, the Ag Building has been the butt of unsavory comments for half a century.

Probably because of its drab exterior that is outshined by its visually striking neighbors, the new University Bookstore and revitalized Mizzou Rec Center, the 50th anniversary of the Ag Building’s May 14, 1961 dedication passed with no campus recognition.

It deserves better.  It has a rich architectural history with links to two important Kansas City buildings and, possibly, another in London.

A Drab Building at a Reasonable Price

Missourians got a lot of building in 1961 for their $2 million (equivalent to $14.4 million today) investment. The 90,000-sq.-ft. structure came in at about $22 per square foot, 20 percent under contemporary projects. 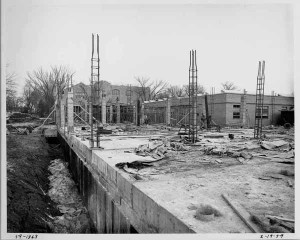 Concrete is poured in 1958 for the main floor of the Ag Building.

The Ag Building was made of poured concrete, then a unique construction technique on the Mizzou campus. Concrete was faster and less expensive than the traditional MU red brick or limestone block.

The exterior facade is faced with 4×6-ft. shot-sawn Indiana limestone that practically flew into place, a contemporary account said. Hand-worked Missouri limestone, used in Brady Commons and other campus buildings of the day, was more expensive and harder to hew. An existing building, the Agriculture Laboratory constructed in 1949, was retained and connected to the new facility, adding another almost 10,000-sq.-ft. and saving even more money.

In all, there were 32 laboratories, five classrooms and 125 individual offices. The building initially housed the School of Forestry; the Departments of Horticulture, Entomology, Fertilizer Control; the offices of the Agricultural Editor (who had a sound-proof recording booth) and administrative offices.

It has been said the budget allowed for either air conditioning or windows. The former won out, making the Ag Building one of the first at MU to be completely air conditioned.

The Feb. 1961 issue of Missouri Alumnus reported that faculty and staff had to get used to a lack of outside light. “Some isolated cases of creeping claustrophobia have been reported,” the magazine writer noted. “It has been said that a person at work would never know if it is raining or snowing unless word is brought word to him from the outside. Of course, some daylight comes in at the entrances, but if there were a power failure, the building would plunge into darkness. To meet such an emergency, each worker has been supplied with a flashlight.”

Though the windowless exterior was ridiculed, the ornamentation over the entrances got rave reviews. “The outside appearance of the building, with its 308-foot width of front and 163-foot depth, could have been a dreadful monotony had there not been some elaboration to the entrances,” the Missouri Alumnus reported. “To provide this relief, the architects were given free hand to ‘go all out’ and they succeeded handsomely. They used Mosaic tile, imported from India in the agricultural colors of green, brown and gold, set in a framework of Egyptian style stone “bridges.”  Two of these magnificent entrances are on Hitt Street and the other is on Rollins.”

The Ag Building may get little respect aesthetically, but it has a strong architectural pedigree. 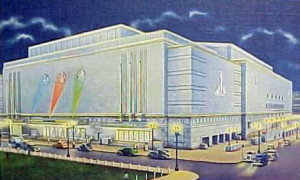 The structure’s chief architect was Alonzo Gentry, a native of Independence, Mo. From 1923 until he retired in 1961, Gentry operated the Kansas City architectural firm of Gentry and Voskamp.

Gentry’s biggest project was the $6.5 million Municipal Auditorium ($102 million in 2010 money) that opened in Kansas City in 1935. This windowless building was made of massive amounts of poured concrete. It was championed by Tom Pendergast, Kansas City’s political boss and owner of Kansas City Ready-Mixed Concrete.Municipal Auditorium was called by the Architectural Record as “one of the 10 best buildings in the world in 1935.”  In 2000, the Princeton Architectural Press called it one of the 500 most important architectural works in the United States.

If the Ag Building has a sister structure, it is in Independence, Mo. 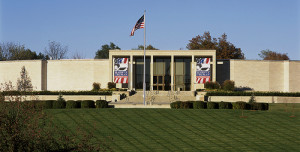 In 1955, Gentry was asked to finish the design of the $1.8 million ($14.5 million in today’s dollars) Harry S. Truman Presidential Library and Museum after Truman’s hand-picked architect, Edward Neild, died at the Kansas City Club while sketching plans. Like the Ag Building, the library is stark, rectangular, windowless, constructed of poured concrete and faced with Indiana limestone.

Architectural writers sometimes cite the ‘Egyptian bridge‘ ornamentation above the Ag Building’s entrances when discussing the old US Embassy in Grosvenor Square, London. The embassy, completed in 1960, is considered an architecturally significant English Heritage site and features a unique exterior design reminiscent of the layout of the Ag Building’s entrances. The embassy was designed by a rival of Gentry, Eero Saarinen, who later designed the St. Louis Arch. Who may or may not have copied who is a matter of conjecture. 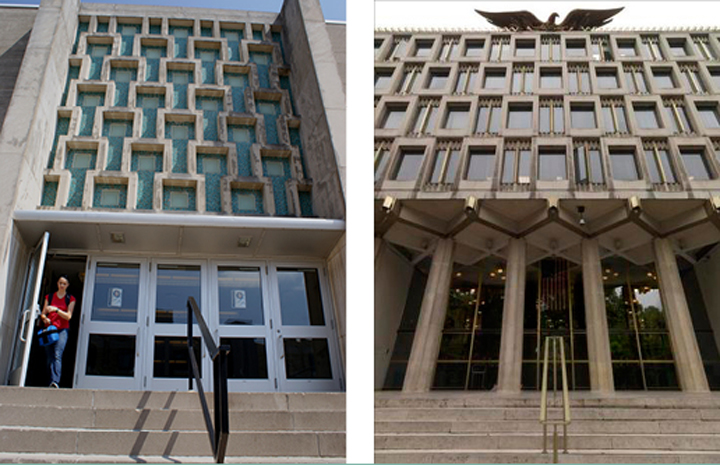 The entrance to the Ag Building, left, and the old U.S. embassy in London, right.

One persistent Ag Building myth is that it was made windowless to better serve as MU’s fallout shelter. While the Cold War was in full fury in the late 1950s when the building was conceived, no written evidence proves that the heavy construction was specified to protect Mizzou students from a Russian A-bomb blast.
Those strong qualities did quickly lend themselves to that mission, however. For decades, Civil Defense signs adorned the structure and barrels of crackers and fresh water and cots were stored in the basement. Campus tour guides of the sixties told students to head to the Ag Building for shelter should sirens signal that Soviet bombers were heading to Missouri.

The Most Modern Facility of Its Kind

The exterior of the Ag Building may have had been built to a price, but the agricultural laboratories and classrooms inside were among the most advanced of the era. The building also was big enough to allow educators and researchers from across campus to consolidate into one facility, enhancing interdisciplinary research and collaboration. 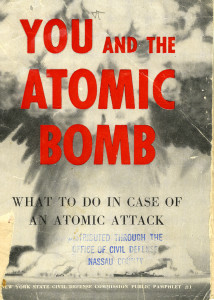 Classrooms were wired for closed-circuit TV instruction. The entomology research labs had a clean room entrance to protect the extensive sample collection from contamination. An insect-rearing laboratory had two walk-in temperature enclosures. Another lab was specifically equipped to study the biology of carpenter-worms, then a major plague on Missouri tree crops. Still another lab had the latest scientific gear to research insects that attacked field crops, fruits, vegetables and ornamental plants.

Tools for faculty and staff were state-of-the-art in 1961. A TV studio had been planned for the basement. Data analysis was handled on a Burroughs Sensimatic punch-card calculator, predecessor of the early IBM computers.

Today, it’s still at the forefront of ag-related science and home to an entomology museum with a world class collection. Its laboratories study critical issues facing a hungry world including how to make crops more drought tolerant, and soybeans “Missouri’s most important commodity” more disease resistant. In a windowless lab, researchers are looking into why consuming mechanically crushed tomatoes seem to help prevent prostate cancer.

The Ag Building’s Mission Was Always in Mind

Even while the lack of windows dominated early discussions, it was not forgotten in 1961 what the structure’s ultimate mission would be. 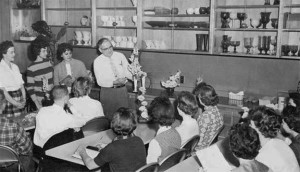 Prof. James E. Smith teaches a course in floral design in 1961. Smith passed away about five years ago.

“The world is now populated by three billion human beings,” Elmer Kiehl, dean of the College of Agriculture, noted in the Ag Building’s dedication brochure. “Every second we bring forth 1.6 persons on the earth. This means that more than 130,000 new mouths must be fed every 24 hours. In half a century [2011] at this tremendous rate, the earth will double its population, and so multiply its problems. Time then will bring into sharper focus the old axiom that “hunger takes no holiday.”

What’s the big deal about windows in this context?