In 1911, rural Missouri had no television or even radio.  Citizens got their news daily or weekly from their community newspaper.  While most coverage dealt with local issues, the emerging wire services, Associated Press and United Press, brought a larger world to Missourians who, in some cases, still lacked electricity.

Following is a synopsis of how these community newspapers told their subscribers about the storm as collected from state historical archives by MU atmospheric science students Evan Kutta and Brian Crow from St. Louis, and Jennifer Power of Durham. 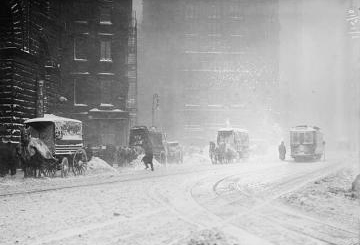 The storm hit Kansas City about noon.  Readers of the splashy Kansas City Journal were told that the temperature there fell 50 degrees in one hour and there was a blinding electrical storm during the blizzard. The staid Kansas City Times reported that a rural farm buggy had been blown by the wind and wrapped around a tree.  A loose wind-driven plow cut a hog in two.  At the farm of William Little, a six by six timber was driven through a cow.

The gray Kansas City Star wrote that snowplows were being rushed to eastern Kansas where heavy snow stopped traffic.  Cities there experienced gas shortages, too.  “But consumers had ample warning,” the Star writer scolded.  “Those caught without reserve supplies will not be able to complain to the gas companies.”

The Kirksville Daily newspaper reported that the warm morning gave way to high winds that broke windows and tore down signs.  Before noon a cloudburst occurred, overwhelming the city’s sewer system and turning streets into streams.  The rain then turned to hail, followed by a blizzard at 2 p.m.

In Pettis County, the Sedalia Democrat wrote the cold wave struck at 1:45 p.m., causing a drop of 40 degrees in less than two hours.  A high wind preceded the storm, tearing off a portion of the Pettis County Courthouse.  Interestingly, the Democrat carried a story the previous evening, Friday, Nov. 10, portending a strong cold snap.  It was one of the few newspapers to give its readers word that the pleasant weather was about to change. 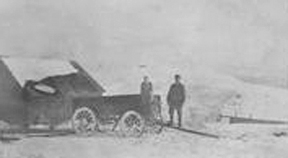 The Miami Weekly News, Saline County, reported that Teamsters delivering groceries to Marshall had to abandon their wagons and seek shelter.

In Warren County, the Marthasville Record newspaper said the storm dropped the temperature 70 degrees in less than six hours.  Readers awoke Sunday morning to a temperature of just two above zero – 80 degrees less than 24 hours before.

In Green County, the Green Ridge Local News claimed that the temperature dropped 40 degrees in as many minutes.

The Graphic newspaper in Shelby County reported frozen pools of water with the heads of frogs protruding out.  “They did not have time to ‘duck’ before the ice formed.”

The Chillicothe Constitution said the sudden change in temperature almost killed several farmers who went into their fields “wearing only light wraps.”  By the time they got home, snow was falling.  “Many appeals for help were received at police headquarters,” the newspaper continued.  “Those without fuel were given the best aid possible.”

The Miller County Autogram, Tuscumbia, reported that farmer Michael Sullivan, living south of Monroe City, froze to death in the blizzard that followed the cold front.  “He was found dead at his gate,” the newspaper reported.  “The family, supposing that he remained in town, felt no alarm at his absence.  Freezing to death in the middle of November is very unusual in Missouri.”

The Jefferson City Daily Democrat-Tribune wrote that in Chicago one man died by heat and another died by cold during a 19-hour period.  John Maloney, a freight handler, was “prostrated by heat” while working in a boxcar during the warm morning.  That evening, Henry Green was found frozen to death when he slipped and fell and could not get home “before the cold did the rest.” 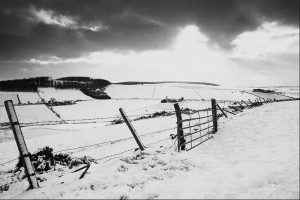 Loose living and the cold blast did at least one fellow in. According to The Gasconade County Republican, a 35-year-old man from the “Feuersville neighborhood” was found frozen to death a half mile east of Bland. The storm rolled in while the man was making his way to a brother-in-law’s house about a mile and a half east of the village. “Deceased, who was about 35 years of age, had been in Bland all day last Saturday and was drinking,” the story reported. “Evidently he fell by the roadside and succumbed to the influence of the liquor and froze to death.”  The report noted family members thought he was staying with someone else. The man was “addicted to drink and this was the cause which that led to his death by the elements,” the paper noted, citing an inquest report by Coroner Frederick Aufer Heide, of Drake.

Another account in the Republican headlined “Storm Dead Reaches 57, 205 Injured” carried a St. Louis dateline and was likely reprinted from various other news sources. Damage to property from Canada to the Gulf of Mexico was estimated up to $10 million. “On the Great Lakes,” the story noted, “nineteen persons are reported drowned. Two men froze to death in Chicago. In North Dakota, a farmer walking across the prairie was frozen to death. At Owosso, Mich., two were killed and twenty-three injured by a tornado. Several boats out of Chicago are reported missing but rescue efforts could not begin until gale-force winds ceased.”

In St. Louis, the storm hit at dusk after an afternoon high of 78 degrees.  Streetcars were stropped, houses “unroofed” and telegraph poles toppled.  The St. Louis Star newspaper reported the temperature dropped from 76 degrees at dinnertime to 27 degrees and hour later with “rain falling in torrents and a 50-mle wind rocking trees and buildings.”  The paper also reported that an unidentified man on the Eads Bridge was blown from his buggy and into the Mississippi River. 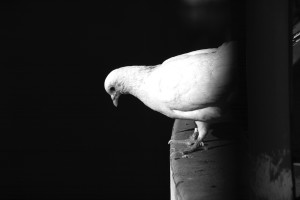 The St. Louis Republic, under the headline “Ill Wind Brings Pigeon Pie,” wrote that numerous pigeons roosting in City Hall seemingly froze to death and fell to the sidewalk.  One man kept a few in a basket in his kitchen while he slept.  He was aroused by “flapping and banging.”  The pigeons, having recovered by the warmth, “were recaptured and converted into meat in the regular way.”

The St. Louis Post-Dispatch described how a family living on a houseboat was swept down the Mississippi after high winds snapped their mooring ropes.  “The last I heard of them was as they were passing the Sidney Street ferry, crying for help,” a witness told the paper.  “As soon as the wind was down I went out in my boat, but after three hours search, I had to give up.”

A banner headline the day after the storm, the newspaper said the mercury dropped 26 degrees in 10 minutes.  A subhead stated that hundreds were left “shelterless” and that steam and electricity service was hindered.

In St. Charles, the Daily Cosmos-Monitor described a 17-minute hailstorm with hailstones the size of walnuts.  High winds blew a brick through the window of a Dr. Ely, early striking him. Two Wabash boxcars were blown over.

The Washington Citizen described chickens who flew into trees during the warm and sunny Saturday morning and who were frozen in their perches Sunday morning.

The Tipton Times reported that the storm hit there just before 3 p.m.:  “The rain came down in torrents and was followed by the most severe hailstorm witnessed here for 40 years.  Almost every pane of glass in the west side of residences and business buildings in the city was broken.”

“With a roar absolutely deafening, a tornado swept across the city, wrecking buildings, tearing up trees by their roots, demolishing the telephone service and injuring several persons,” the Springfield newspaper reported. 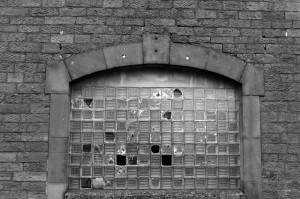 The Perry County Republican, Perryville, said every house in town had windows broken.  Large hailstones pummeled a number of pigs “and a great deal of poultry was killed in a like manner.”

The storm departed Missouri at around 10 p.m. on Saturday.  The weekly Poplar Bluff Republican reported 60-mph winds.  The most significant damage was a wagon blown over with “debris scattered for two blocks along the street.” The greatest financial damage was $1,500 of chrysanthemums scheduled to be shown at a local festival that Sunday. 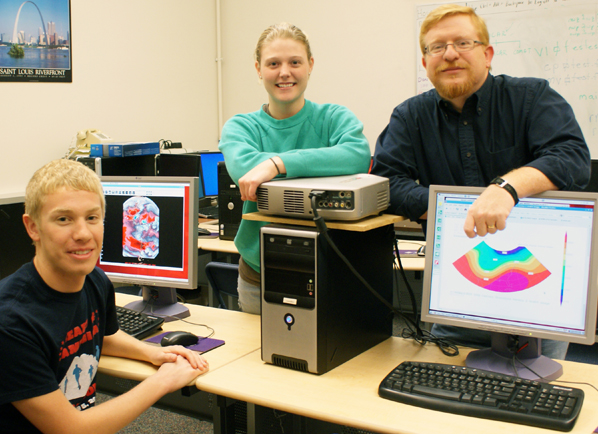