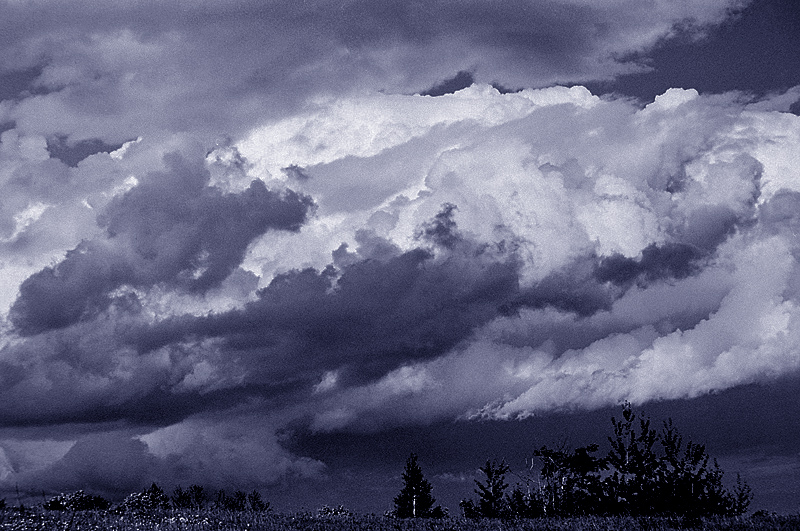 Saturday, Nov. 11, 1911 saw what was probably the most sudden and dangerous cold blast in American history.  People who enjoyed a summer like morning froze to death in heavy snowfall that evening.  Blue skies changed to low clouds, driving rain, sleet, hail, thunderstorms, tornadoes and blizzards in half a day.  Winds were so violent that they turned buildings into trapezoids.

To better understand what created the storm and chronicle its impact, University of Missouri atmospheric scientist Patrick Market and a team of students have analyzed the storm with both modern meteorological tools and dives into the historical records.  They’ve created a three-dimensional 21st Century model of what happened in the atmosphere to trigger the blast and an online map of the destruction that it brought to Missouri.

Market, an associate professor in Soil, Environmental and Atmospheric Sciences in the School of Natural Resources, has for more than a year studied what climatologists call the Great Blue Norther of 11/11/11.

“Actual observed data are sparse from that period,” Market said.  “So, we augmented the scientific observations with newspaper reports archived in state historical societies.  This is the best and most complete scientific record that we can create from the documented and reliable sources available.”

The sudden summer-to-winter cold front fits right into his research:  He studies atmospheric dynamics of the world’s biggest storms, particularly how the jet stream interacts with weather fronts.  His overall research is aimed to better predict heavy rain and snowfall events. 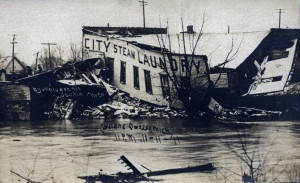 In addition to the destruction in Missouri, the storm spawned tornadoes throughout the Midwest. Nine tornadoes occurred in Michigan, Illinois and Indiana. In Janesville, Wis., one of the first American cities affected, what looks like an EF4 tornado killed nine and injured 50.  Stunned citizens were still pulling survivors from the debris when they found themselves in a blinding snowstorm and a temperature near zero.  Buildings in Owosso, Mich.’s downtown were pushed over into strange shapes.  Homes in Virginia, Ill. looked like they had exploded.

“The sudden cold snap was the ‘marquee event.'” Market said. “But the tornado damage in certain locales was significant, also.”

It started as a summer day in Kansas City.  Just before noon, the sky was bright blue and the air humid and warm at 76°.  As the forecast in the morning Kansas City Times indicated no change, people left their coats in the closet and made it a point to enjoy the pleasant weekend conditions.  It was even nicer to the south in Springfield where the thermometer topped 80°.

The Blue Norther burst onto KC with howling northerly winds pushing a thick blanket of dark stratus clouds. The low clouds were bluish-gray, the reason why the phenomena has its colorful name.  In 14 hours, the temperature dropped to 11° with rain turning to thunderstorms and hail, then sleet and heavy snow. 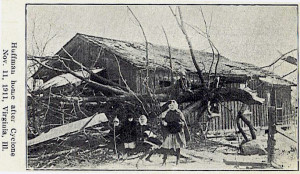 In central Missouri, the Blue Norther hit around 2 p.m. and changed warm breezes to howling northerly gales.  Old Columbia weather records show that in just one hour the temperature fell from 82° to 38°.  At 4 p.m. there was sleet with an air temperature of 30°.  By midnight the temperature was just 13°.  The 69° temperature differential in one day established a record that has never been broken.

In Tipton, news wire reports of the day after tell of balmy temperatures and azure skies suddenly changing to thunderstorms with hurricane force winds and hail the size of walnuts.  A tornado went through the small town, damaging almost every structure.

The same thing happened in Springfield.  At 4 p.m. a violent line of thunderstorms preceded the cold wave, creating hailstorms and tornadoes that ripped into the city.

Volunteers combing collapsed buildings for survivors had to call for their winter coats to continue.  In Springfield, the temperature plunge was even more extreme, dropping 70° in 10 hours.  A balmy 80° day had turned to a blustery 40° in two hours before hitting 10° after midnight, another 100-year-old record that still stands.  Contemporary newspaper accounts claimed the temperature dropped 40° in just one hour.  The record drop in Oklahoma City of 66°, where the Blue Norther blew up a huge dust storm, has not been equaled. 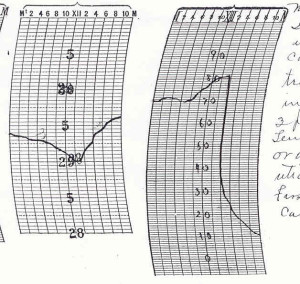 This automatic temperature trace from the Springfield Weather Station recorded the sudden drop in temperature. The drop established a record that still stands.

The tornadoes, cold and blizzards were only part of the story. The Norther also brought brutal straight-line winds, too. John S. Hazen, the weatherman-in-charge at Springfield in 1911, reported:   “Increasing S to SW winds shifting to the NW at 3:45 pm and attaining an extreme velocity of 74 miles for one minute. Considerable damage done to buildings, wires, and trees. Many windows blown in and several people injured. Record high temp. occurred about 2 pm and low temp for this early in the month. Temp fell from 80 to 21 at 7 pm. Cold wave order received and given usual distribution. Hail, sleet, rain, and snow fell. First thunder 4:52 pm. Last 6:10 pm. Storms came from north.”

One woman in the Ozarks recalled that the temperature dropped so rapidly that most of her family’s potato crop, which had been stored in a shed, froze before she and her siblings could move the potatoes to the cellar.

The storm raced through Missouri from northwest to southeast in just 10 hours, finally exiting the state at Sullivan.

“Blue Northers like the 11/11/11 storm are rare and unique events,” Market said.

Meteorologists of 1911 didn’t have any global and high altitude, much less radar or satellite, data to make an accurate forecast.  Even if they had such an indication, they had little time to share it.  The fastest method of communication in 1911, the telegraph, could barely keep up with the storm racing across a continent at 50-70 mph. 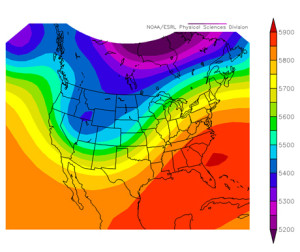 Based on 1911 weather records, this modern map shows the extensive cold blast heading toward the Midwest.

Today, weather scientists like Market know that Blue Northers get their start when a large and bitterly cold air mass builds as far north as the North Pole, usually in association with a strong high pressure system.  Something triggers this large dome of frigid Arctic air to slide south.

When this biting air mass moves slowly and runs into an existing cold air mass over the US, a widespread and snowy winter storm is usually triggered, but it is nothing like the wild violence of the 1911 event.  Something grabbed the 1911 cold air mass and shot it southward at high speed – fast enough to take it from northern Canada to the Gulf of Mexico in just two days.

To better understand the storm through modern meteorological models, Market and his team gathered available 1911 US and global weather data to create a modern weather map based on the latest technology and understanding how planetary weather patterns work.  As weather balloons were rare in 1911, and weather-gathering aircraft as non-existent and satellite and radar data, Market and team had to extrapolate surface temperature, wind and pressure data to what was happening globally and in the upper atmosphere.

Meteorologists of 1911 had access to an extensive network of regional US and Canada surface weather reporting stations, but lacked critical worldwide data taken for granted today.  Also, forecasters of 100 years ago were only just beginning to comprehend how warm and cold fronts worked.  They also had no inkling of the jet stream, a rapidly moving river of air thousands of feet above the surface – something that is now known to be a key element in how fast the Blue Norther traveled. 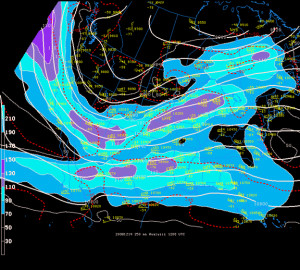 With this updated weather map, Market and team looked for similar modern storms that have been analyzed with state-of-the-art radar, satellite imagery, global computer model dynamic analysis, and high altitude winds aloft and pressure soundings.  Their intent was to extrapolate data from this better-documented storm and create a modern weather model for the 1911 storm.

That effort brought them to a storm that occurred Jan. 29, 2008.  While it was not near as fast or strong as the 11/11/11 event (the 2008 temperature drop was from 70 to 15 degrees over a longer period of time), it had a similar starting point, timing
and temperature decrease, and also was an intense cold weather front hitting an existing warm air mass.

From the 2008 data, Market saw how the 1911 intense dome of cold air over the North Pole had grown so large that it began to ooze south. Then, the cold air mass interacted with a strong jet stream that then uncharacteristically plunged south to the American Midwest and into an existing and unusual warm and moist air mass being funneled into the Midwest by southerly winds from the Gulf of Mexico.

It was these three separate and unique weather events working in concert that created the violence of the 11/11/11 storm.

Simultaneously with the creation of the weather model, atmospheric science students consulted Missouri historical archives for first-person accounts of the storm and newspaper clippings.  That effort resulted in a three-inch-tall stack of clippings from Missouri media large and small who chronicled the aftermath of the storm.  For Market, the comparison of atmospheric analysis and on-the-ground destruction will give his students a unique insight into violent weather and what to expect when they create their own forecasts.

The interactive map of the storm is available at: http://cafnrnews.com/1911weathermap/

Stories from Missouri newspapers about the storm, as discovered by the students, is available at: http://cafnrnews.com/2011/10/missouri-journalists-chronicle-the-storm/