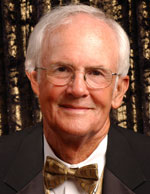 John Grace of St. Joseph, Mo., BS AGR ’58, MS’63, was the recipient of the 2011 Missouri Tiger Pride Award. The award is presented by the Mizzou Alumni Association and recognizes sustained, outstanding volunteer efforts, ongoing leadership and service to the University through the Alumni Association.

John has been proudly representing Mizzou and CAFNR with integrity for many years. After graduating from Mizzou, John went to work for Quaker Oats where he used his degrees in Agriculture to work his way up through the company, ultimately retiring as the St. Joseph Plant Superintendent in 1997. After retiring, John became very active in the Buchanan County Mizzou Alumni Chapter where he served as President from 1998-2000. During his tenure as President, the chapter was the recipient of several awards, including the Jerry Johnson Honor Chapter of the Year and the Outstanding Achievement Award for Membership Retention.

In addition to his local chapter leadership, John has had an outstanding volunteer career at the national level of the Mizzou Alumni Association. He has served in various roles over an eight year period, and played an important role in the reorganization of MAA’s leadership structure. John currently serves as a Chapter Advisor to the Buchanan County Chapter. He continues to collaborate for the greater good and work towards the betterment of Mizzou.