The St. Louis-based Drury Hotel chain is an example of how a company can achieve success by focusing on making its clients happy.  Chuck Drury, president and chief executive officer of Drury Hotels, gave CAFNR hospitality management students an inside look at how this is done. 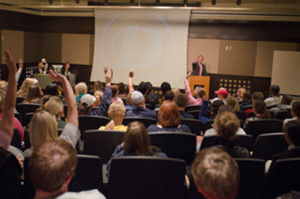 Drury was a “Professor for a Day.” The Professor for a Day program is sponsored by the College of Agriculture, Food and Natural Resources’ Robert O. Reich Family Executive-in-Residence Program.  It is designed to allow MU students a collaborative and one-on-one interaction with successful business executives.

From its beginning with one hotel in Sikeston, Mo. in 1973, the St. Louis-based Drury hotels have now operates more than 130 hotels in 20 states. The company employs approximately 4,000 people.  The company remains family owned and has earned six consecutive annual awards for customer satisfaction presented by J.D. Power and Associates.

Its brands include Drury Inn and Suites, Drury Inn, Drury Plaza Hotels, Drury Suites, Pear Tree Inn by Drury, as well as other hotels in the mid-price hotel segment.  In August it opened the renovated Broadview Hotel in Wichita, Kan. and the Drury Inn and Suites in Independence, Mo.

Drury started his career in the family business as a busboy at age 11.  Since then he has worked in every aspect of the business including construction, development, marketing and hotel management.  As president and CEO, he oversees strategic planning and long-range direction for the hotel chain.

The company maintains a “Do It Yourself” corporate structure, Drury told the students.  While other companies sub-contract their marketing, operations and employee staffing, Drury Hotels build their facilities, manage their properties form a centralized administrative structure, create and distribute their own marketing materials, and supply items like food through a central distribution network.  This allows the company to keep costs down and provide a consistent customer experience throughout the chain.

The hotel also has a “hire from within” philosophy that encourages people to grow within the organization.  Drury said that 65 percent of corporate leadership positions at the company were filled from within.  Its 23 percent employer turnover rate is among the best in the industry where a 100 percent annual employee turnover rate is common.

Drury said that dedicated and well-trained employees are the key element in creating customer satisfaction, and thus ensuring repeat business.  He said the company’s philosophy is to hire people who have a genuine interest in helping people.  “We can teach work skills,” he said.  “We can’t teach good people skills.”