Mizzou Alum Prepares to “Cycle for the Summit” 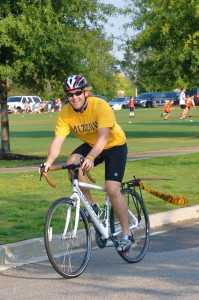 CAFNR Alum Brent McCauley is about to embark on an expedition most would call crazy McCauley and his friend Michael Hunter are about to climb the highest point in every state while cycling the country. They’re using only their physcial power to travel the 25,000 plus miles and climb each peak.

After graduating with his bachelor’s from the University of Missouri in Agribusiness Management with a minor in International Agriculture in 2009, McCauley attended the University of South Carolina where he worked to get his master’s. There McCauley first met his friend and climbing partner when Hunter helped him tackle the USC’s 54-foot rock climbing wall.

“Michael was actually the guy who got me into rock climbing,” McCauley said. “We have traveled all over the Eastern U.S. camping and climbing with our friends.”

The two conceived the idea for the trip a year ago, but it wasn’t until a few weeks before their graduation from USC this past May that they decided to turn their crazy idea into reality.

“We thought, when else are we going to be able to take a year – we now realize it will likely be longer – of our lives to cycle around the country?” McCauley said. Since then, the two have been putting together the entire expedition, which they’ve dubbed “Cycle for the Summit.”

The trip was inspired by the documentary “Take a Seat,” in which Dominic Gill rode a tandem bicycle from the top of Alaska to the tip of Chile. The inspiration evolved to combine their interest in mountaineering and cycling as a form of transportation with a special organization that caught their attention.

“Once we learned about Big City Mountaineers and their mission, it was the perfect opportunity to pair our crazy idea with an awesome philanthropic opportunity,” McCauley said.

Big City Mountaineers is a Colorado-based organization that “strives to enhance the lives of under-resourced urban teens through transformative outdoor experiences.” Their primary program is a week-long expedition that involves a five-day wilderness backpacking or canoe trip where adults and teens work together. The two plan to raise $50,000, which breaks down to $1,000 a summit, through their expedition for the Big City Mountaineers. 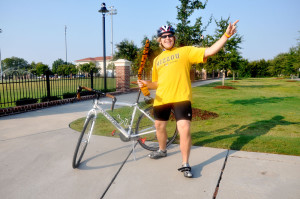 “This trip will be fully unsupported, so it will just be us and the open road,” McCauley said. This means the guys will be carrying everything for their trip on their bicycles including bike repair equipment; camping gear, such as a tent, sleeping pads, sleeping bags, cookware, stove, fuel; all of their clothes for cycling, casual, mountaineering and rain; but “most importantly I will have my faithful tiger tail with me!” McCauley said.

An unsupported trip also means it will be just McCauley and Hunter undertaking the trip. However, they are encouraging people to come out and join them. “This could include cycling with us for 10 miles or 10 days,” said McCauley. Depending on permit restrictions, adventure seekers also can join them for some of the high points they will be ascending.

As for what stop McCauley is most looking forward to, well that’s a no brainer for him.

“Nothing will top the emotion and excitement of a University of Missouri homecoming, let alone the 100th anniversary.  When Michael said he wanted to get serious with Cycle for the Summit, I said I would do it on one condition, that we made it to Columbia for homecoming, because there was no way in the world I would miss the 100thanniversary of homecoming,”  McCauley said. “Without hesitation, Michael agreed, because everyone in South Carolina knew of my undying passion for Mizzou.  So, sure enough, we will be in Columbia for homecoming. Make sure to keep an eye out for us in the parade.” 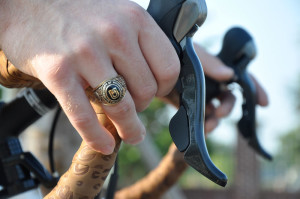 The two have been planning their route based on the best time of year to climb certain peaks, such as Denali’s Mount McKinley in Alaska, which they will be tackling during the peakclimbing season in late May/early June with a professional guide. However, the climbs themselves aren’t their only concern.

“I am actually most nervous about riding up north during some of the winter months.  Reaching the summits will be strenuous, but I am not worried about that; it’s the cold weather riding that is worrying me the most. From the freezing temperatures to the likelihood of snow,” McCauley said.

The expedition’s launch will kick off in Columbia, S.C., where the two have been preparing and have a strong following. The itinerary of the trip will be flexible, but it is projected to take about a year and a half.  They plan to reach their 49th summit, Boundary Peak, Nevada, in mid-October, 2012. From there it is on to their last summit, Mauna Kea, Hawaii, and finding  how to get there in an energy-efficient way has proven to be quite the challenge.

“We hope to either pedal boat or sail our way to Hawaii — basically any form that does not use carbon.   If any students or alum have an idea or know someone who would sail us to Hawaii, we would love to hear from them,” McCauley said.

While attending the University of Missouri, McCauley, a native of Savannah, Mo., frequented the MKT trail. He hopes the expedition will encourage people to be more active in their daily lives and use cycling as a mode of transportation.

“Columbia is an extremely cycling-friendly town, so during students’ time at Mizzou it can be easy to get in the habit of riding your bike to class, the grocery store, or a friend’s house,” he said.

Those interested in learning more about Cycle for the Summit or donating to Big City Mountaineers can visit the website at www.cycleforthesummit.com or check out the team’s Facebook page.