Mmmm, nothing like a bite of vanilla ice cream on a hot summer day.  Whoa, where’d that cherry flavor come from? 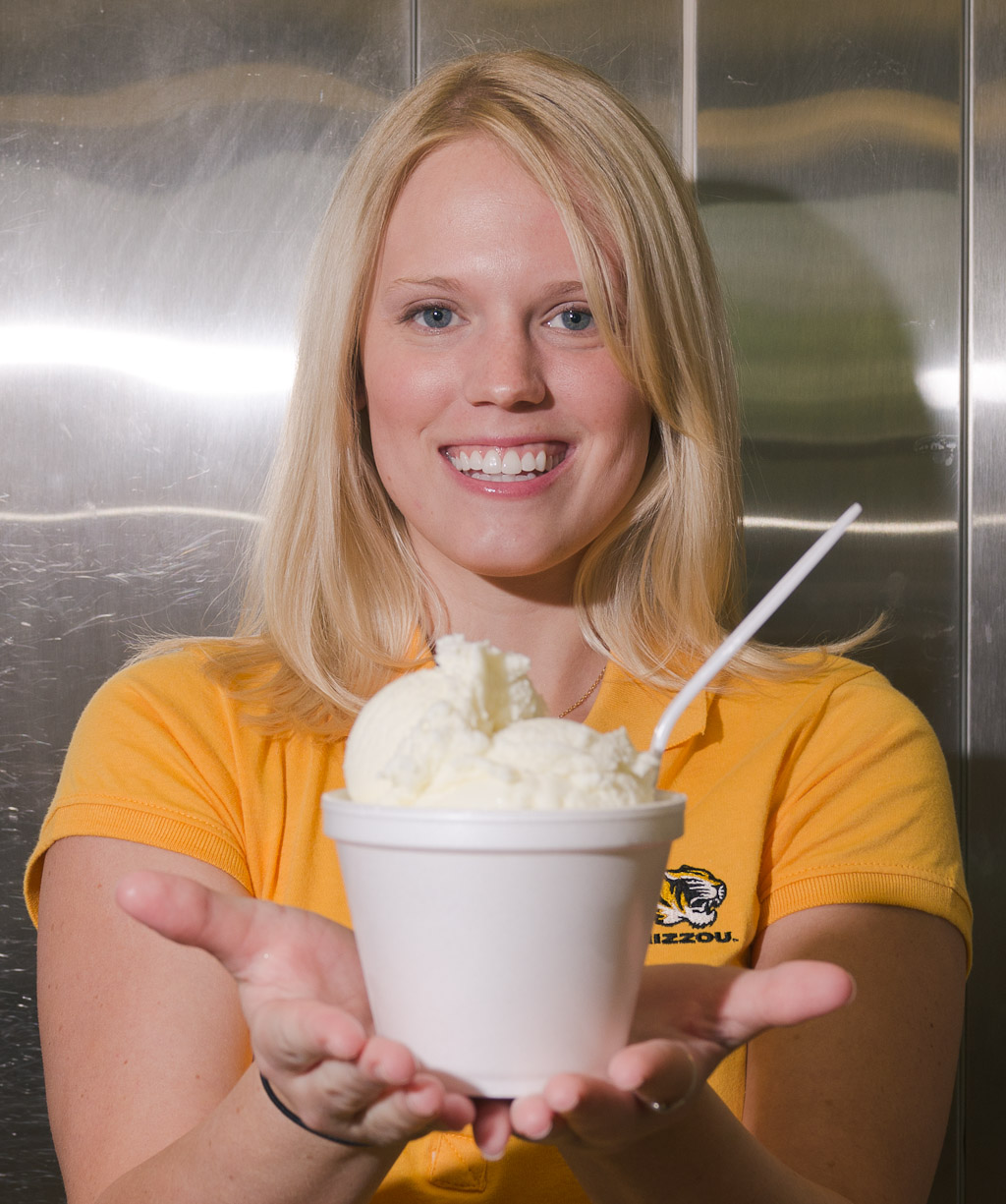 Elizabeth Fenner, a food science graduate student at the University of Missouri College of Agriculture, Food and Natural Resources, is finishing testing of an experimental ice cream that starts as one flavor then shifts to another before being swallowed.

Her goal is not to mix two flavors into a third flavor, but to have two distinct sensations of taste separated by a second or two.

Her process uses micro-encapsulation techniques that coat the second flavor.  This substance breaks down almost immediately in the mouth, releasing additional flavor compounds.  The project isn‘t intended to create a commercial project, but to hone Fenner’s skills as a food development scientist, an area she hopes to enter after graduation.

Fenner faced numerous problems making micro-encapsulation work in ice cream.  The process is commonly used in long-lasting chewing gum and microwave cooking, but it has seldom been successfully tried in anything cold or swallowed quickly.

Unlike gum, ice cream isn’t chewed to mechanically break down the encapsulation.  Ice cream doesn’t stay in the mouth long enough for saliva to dissolve it, either.  Fenner could only rely on a temperature increase to quickly melt away the coating.

Micro-encapsulation of food is a relatively new science that is less than two decades old.  It involves covering flavor compounds in a wax, gelatin, protein or food-grade polymer casing just millionths of a millimeter in size.  In addition to chewing gum, the process is used to coat probiotic bacteria for their protection from gastric activity or to delay premature flavor release in food during microwaving.  Many long-acting pharmaceuticals use this technology, too.

Fenner, a native of Weatherby Lake, Mo., near Kansas City, tried a variety of encapsulation materials including low-tech vegetable oils, various carbohydrates and even clarified butter.  She was experimenting with polymers when she came across a surprising, and now secret, ingredient.  This substance, common in almost every pantry, didn’t break apart during mixing.  It didn’t add a taste of its own, either. Most importantly, it dissolved immediately when it hit the warmth of the mouth.

Getting to that secret ingredient was tough.  Numerous early encapsulation choices broke apart during freezing, letting the primary and secondary flavors mix, or didn’t melt until after being swallowed.  Still other versions partially melted before being swallowed, leaving a bland flavor or funny aftertaste.

Testers immediately got the idea that this was a fun novelty product and said they would consider buying it.  They consumed all of their samples and sometimes wanted more, a good sign the ice cream had been enjoyed.  So far, only cherry has been tested as a second flavor.  The more complex flavors of chocolate would open whole new research challenges.

Ingolf Gruen, associate professor and program chair of CAFNR food science, is Fenner’s advisor and will be the ultimate judge of the success of flavor release ice cream.   Gruen teaches his students food science by challenging them to invent new foods or repurpose common food in new ways.  A now-graduated food science student created a honey-glazed pork chop.  Another ice cream student added fiber, antioxidants and vitamins to create a healthy ice cream that will go commercial this month through CAFNR’s Buck’s Ice Cream store.  Research has shown this product can be good for gastrointestinal problems, including diarrhea and irritable bowel syndrome, as well as remaining a guilty treat.

Fenner is compiling her data for submission to Gruen and hopes to graduate this December.  She wants to land a position in product development in the ice cream industry.

Ice cream in America is big business and getting bigger.  According to the National Ice Cream Retailers Association, ice cream consumption grew nearly 25 percent from a year ago. Ice cream and other frozen desserts are consumed by more than 90 percent of households.  Nearly 10 percent of American milk goes into frozen treats.