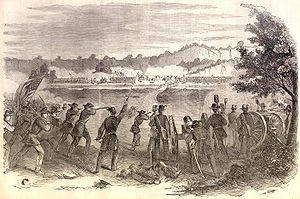 One hundred fifty years ago, two armies battled each other and the weather in Missouri’s first significant Civil War battle.  While the battle’s course is familiar to historians, virtually no scientific data is known about the atmospheric conditions that influenced the fighting.

In a project that blends history, sleuthing and modern weather analysis, Tony Lupo, professor and department chair of atmospheric sciences at the University of Missouri, and Mike Madden, a meteorology student, have pulled together odd bits of global meteorological flotsam to compile a Missouri weather forecast 150 years back in time.
Their analysis provides a unique insight into the Battle of Carthage, which took place in the first months of the Civil War on July 5, 1861. Here, a Confederate force delayed by rain and wet gunpowder, was expecting an attack from the north.  The force, however, encountered, attacked and routed a smaller Union force approaching from the southwest.  The engagement set the stage for two later battles that would determine if Missouri stayed in the Union.

“The Carthage battle was rather meaningless from a tactical or strategic view, but pro-Southern elements in Missouri championed their first victory,” Lupo said.  “Carthage only played a part in Missouri’s war by helping spark recruitment for the Southern regiments.”

The battle’s preamble began when pro-Union forces chased the Confederate Missouri State Guard from Jefferson City to Boonville.  There, a skirmish took place on June 17, a victory for the Union that pushed the unorganized State Guard southward.  The Guard was commanded by Governor Claiborne Fox Jackson and numbered approximately 4,000 unorganized, inexperienced soldiers.

During this chase weather intervened, Lupo said.  “After the Boonville victory, Captain Nathaniel Lyon, commanding Union troops, planned to vacate Boonville with his larger and more experienced force by June 26 to pursue,” he said.  “However, heavy rains created supply problems that stalled his efforts.  On June 29, the rain continued to pour down, again pushing back Lyon’s departure.  As a result, Lyon was unable to begin his campaign.”

The retreating Confederates fared no better and ran into a “blinding” thunderstorm on July 3, hindering their ability to move or organize.  “Torrential rains wreaked havoc with every attempt to train and drill the troops,” a contemporary report reads.  “Much of our gunpowder was soaked by the rain.”

“These rain showers were incredibly vexing to both sides,” Lupo said.  “Due to the rain, Lyon was held back and had little chance of good reconnaissance.  No one on the Confederate side had a clue how far away Lyon and his experienced troops were.   These storms confounded Jackson.  Should he continue moving his army deeper into southwest Missouri to train his men, or hold his ground and prepare to make a stand against Lyon’s expected, and rumored, pursuit?”

Meanwhile, Franz Siegel, leading another Union force of about 1,100 soldiers from southwest Missouri, was in search of the governor and his troops. Learning of the Confederate encampment north of Carthage, Siegel marched toward the city.  On July 4, Jackson, hearing of the advance, turned his men south to engage Siegel’s force.

The two armies met about 12 miles from Carthage at Coon Creek. Siegel started the fighting with his artillery. Jackson replied in kind. Both sides then engaged in rife fire.

Spotting another Confederate force — actually unarmed recruits — moving into the woods on his left, Siegel feared his flank would be attacked and ordered a retreat. Jackson pursued, but Siegel conducted a successful rearguard action. Under cover of darkness, he retreated to Sarcoxie.

Forty-four US troops were listed as casualties versus 100 to 200 on the Confederate side.

A Weather Forecast 150 Years Back in Time

No detailed Civil War-era weather records exist for Missouri.  The only primitive weather station in the area was at Fort Leavenworth, Kan.  To draw a detailed weather map of June-July 1861, Lupo and Madden employed analog forecasting — a part of modern atmospheric science that constructs, or reconstructs, weather conditions by taking available existing data and matching it to historical patterns. This technique is used today; forecasting weather far at sea where radar doesn’t reach and satellites can’t measure surface temperature under clouds.

Some clues were surprising.  A June 30, 1861 Minnesota astronomy notation reported a sighting of Thatcher’s Comet.  This told the researchers that the sky was clear there, probably because of a nearby high pressure system.  The persistent rains in Missouri suggested a nearby stalled front. Battle accounts describe a lot of rain followed by warm temperatures, leading the meteorologists to surmise that the stalled front began to move during the battle and cleared Carthage at the end of the fighting.

The pair took this data and searched modern weather records for an atmospheric pattern that matched the 1861 conditions.  They found such a pattern during June 26-July 4, 2007.

This match didn’t surprise Lupo.  The 1861 global data strongly indicated a classic La Niña weather pattern, the same pattern that existed over Missouri in 2007 and is present in 2011.  La Niña refers to a period when ocean temperatures across the central and eastern Pacific Ocean are cooler than normal. It influences the strength and location of the jet stream over North America.

These patterns tend to spawn more hurricanes in the Atlantic. Lupo and Madden checked these records and found seven known 1861 hurricanes.  In 2007 there were six hurricanes.  With this data, the pair created likely weather maps and radar plots during the Battle of Carthage.

One map includes a weak cold front moving out of Nebraska and into Missouri.  This is the front that triggered the rain that dogged the soldiers.

While the weather analysis doesn’t change any aspects of the battle, it is one more piece that for historians and military analysts can ponder when researching this part of the Civil War, Lupo said.