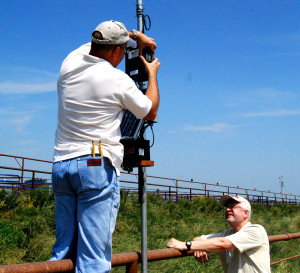 The heat is on. With temperatures in the high 90s and heat indexes in the triple digits, the next several days could pose significant risks to mid-Missouri livestock.

According to USDA data, Missouri ranks ninth in the nation in cattle and beef sales earning more than $370 million in 2010, and its dairy industry has made a significant comeback in the last ten years, due in no small part to pasture-based research led by an interdisciplinary team of MU researchers. The extreme heat can threaten those valuable commodities, but a few preventive strategies can help ensure the health of the herd.

Don Spiers, professor of animal sciences in the College of Agriculture Food and Natural Resources, suggests some common sense approaches to preventing and dealing with heat stress in beef and dairy cows, two agricultural industries vital to Missouri’s economy.

Animals can become heat stressed with temperatures in the 80s, and the higher the mercury rises, so does the threat of heat stress. Possibly more important is how low the temperature drops at night.  If the air temperature does not fall much below 80 degrees at night, then the heat builds in the animal and after 2-3 days could become a serious threat.  Incidences of heat-related deaths in cattle occur more often during these periods, Spiers said.

A quick way to visually determine heat stress in cows is by monitoring their respiration rates. Normal rates are between 40-50 breaths per minute, which can be observed by monitoring their flank. If the rate gets above 100, the animal is experiencing heat stress. If their breathing rate is higher than 120 breaths per minute, they could be in serious trouble.

1)  Have plenty of clean, fresh water available, and in more than one trough. During times of high heat the dominant animals won’t often stray from the water, especially in a feedlot setting, and sometimes the less dominant animals can’t access the water and become dehydrated.

2)  Provide adequate shade. Trees are better than artificial shade because air can flow more freely through them. Locate the water close to the shade, so the animals limit their sun exposure. By measuring with a globe thermometer, Spiers has determined that radiant temperature can be 10-15 degrees higher than the air temperature, so getting animals out of the radiant heat is vital for their health.

3)  Feed them at night. When animals eat their metabolic process causes their temperature to rise. In cattle, this process peaks about three hours after feeding.

4)  In dairy operations, use misters and fans to facilitate evaporative heat loss. Once the air temperature is equal to body temperature, the only way to expel heat is through evaporative loss. However, it is possible to use too much water to cool cows. “If you wet them so much that the water is dripping off and not evaporating, you’re wetting them too much, and you’re creating a damp environment and you could be setting them up for disease such as mastitis,” Spiers said.

5)  If you must transport or work with animals, do it early or late during the day.

6)  Be cautious of “silver bullet” solutions. The cheapest and most effective strategy is to provide shade and ponds.

With the help of a collaborative research effort underway at MU, farmers could soon have detailed heat stress data in the palm of their hands.

Spiers is in the early stages of developing an app to help producers monitor their herds and make informed management decisions. Producers use a temperature humidity index to monitor heat stress, but with an app, they could input information specific to their herd, including breed, age and medical history to determine how to manage their animals during heat waves.

“What becomes exciting is if we have an agreement with producers to allow us access to their data we can then create a multi-nodal framework for the country that allows us to construct a model that’s going to be applicable for the whole country, for the different breeds or the different conditions—we can make an incredible tool for producers to use in the future.”

Gathering and analyzing precise data on a national scale could have tremendous economic impacts.

“At a lower level of heat stress, (daytime highs in the 80s) you’ll have production decreasing and disease increasing, and that’s more difficult to predict,” Spiers said.  “By collecting lots of data like this and putting it into an app we’re creating a huge network of information. We can not only decrease the deaths due to heat stress but also the reduction in production due to heat stress.”

Anna Ball, professor of agricultural education, will collaborate on the project. “How do we take this really cool science and transform it in such a way that a typical group of people can consume it, whether it’s high school students, 4Hers or producers,” Ball said. “That’s the potential that we have and something we want to do across CAFNR.”

This isn’t the first time Ball was involved in agricultural app development.  Last year one of Ball’s graduate students developed an app. for beef producers. She asked her students to take information and concepts they learned and transform it into something they create or produce. Mindy Montgomery developed an app for producers to look at cow genetics.

“We’re really trying to do research that advances, in responsible ways, how we care for our animals and the kind of effects climate change (variability) is having on our animals,” Ball said.