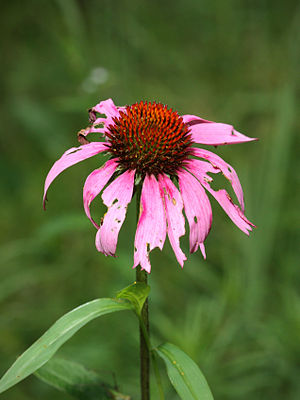 The advertisements scream “All New! All Natural! All Herbal!” They promise fat-burning, energy-enhancing, sex-drive-improving pills for just a few bucks.

Do the claims of these and other dietary supplements, some of which claim to even cure cancer, really work? The Center for Botanical Interaction Studies at the University of Missouri is working to find out.

The new center has launched three studies to see if popular botanical-based supplements have a real, positive and provable scientific effect on the body:

Dennis Lubahn, center director and project leader of the prostate cancer study, is leading a team of 21 MU researchers whose expertise ranges from agronomy to the diseases of laboratory animals. The team will take an interdisciplinary research approach utilizing the unique range of backgrounds and skills on MU’s Columbia campus and the Missouri Botanical Garden in St Louis. The research was made possible by the NIH’s National Center for Complementary and Alternative Medicines, the Office of Dietary Supplements and the National Cancer Institute.

The research isn’t looking into a strange herbal medicine cult practiced in dark alleys, but a large and growing part of American healthcare. Nearly one-third of Americans use dietary supplements for medicinal purposes. Financially, the market has progressed steadily from 5.5 percent annual growth in 2007 to 6.5 percent in 2008 to 7.5 percent in 2009, bringing US retail sales to $9.4 billion in 2009.

Not much science has been collected on how effective these plant compounds are. Worse, the pills and extracts are being consumed in a hard-data vacuum. A New England Journal of Medicine study found that nearly 70 percent of people taking herbal medicines or dietary supplements, most of whom were well educated and had a higher-than-average income, were reluctant tell to their doctors that they used complementary and alternative medicine. Many dietary supplements can interact with prescription medications and cause unwanted or dangerous reactions.

The MU prostate cancer research will use an animal prostate cancer model to test the safety and efficacy of certain supplements that show anecdotal promise as a cure for the disease. Here, mice with a genetic propensity that protects them against poorly differentiated carcinoma (PDC) and mice that are susceptible to PDC will be tested with certain plant compounds thought to inhibit “hedgehog signaling.”

The hedgehog signaling pathway gives cells information that they need to make the embryo develop properly. The pathway also has roles in the adult mouse. When the pathway malfunctions, it can result in diseases like basal cell carcinoma.

In the second research program, it is known that excessive oxidative and nitrosative activities in the brain are the basis for neural toxicity and cell inflammation. These effects underlie many neuro-degenerative diseases, including stroke. The research strives to test the hypothesis that stroke-mediated neural toxicity and glial inflammatory responses are due in part to the presence of proteins in certain signaling pathways. The research hopes to identify botanicals that can positively modify the effects of these proteins.

The third research effort will conduct pre-clinical screening of selected antioxidant botanicals for their potential to modulate in vivo anti-microbial and anti-viral activity. Crude extracts as well as putative bioactive components of each botanical will be tested against two bacterial infections, E. coli-mediated sepsis and systemic listeriosis.

An Ancient and Growing Global Industry

Plants had been used as medicine long before recorded history. Ancient Chinese and Egyptian papyrus writings describe medical plants. Indigenous cultures in Africa and ancient North America used herbs in their healing rituals. Others developed traditional medical systems, such as Ayurveda and Traditional Chinese Medicine, in which herbal therapies were used. Modern western researchers found that people in different parts of the world tended to use the same or similar plants for the same purposes, making the subject a scientifically intriguing one.

In the early 19th century, when chemical analysis became available, scientists began to extract and modify the active ingredients from plants. Later, chemists began making their own version of plant compounds creating aspirin and digitalis. Over time, use of herbal medicines declined in favor of drugs in western nations.

In the rest of the world, plant-based medicine continues. The World Health Organization estimates that 80 percent of people worldwide rely on herbal medicines for some part of their primary health care.

US consumers are turning to supplements as an affordable way to stay healthy. According to the dietary supplement industry, older Americans are significantly more likely to integrate supplements into their daily lives, sometimes as a replacement for expensive prescription drugs. As the massive Baby Boomer population ages, the supplement industry continues to widen its customer base.

The MU center is looking at herbal and botanical products, probably the largest part of this industry. These products are generally taken for reasons other than nutrition, although FDA labels them as a food supplement.

Dietary supplements from plant sources are sometimes referred to as “phytopharmaceuticals.” They are produced from fresh, dried or otherwise preserved plants or parts of plants. The active ingredients are usually not completely isolated but rather are obtained along with other naturally occurring components of the plant. These other components are believed to influence the efficacy of the active ingredient.

Probably the most common plant-based supplement is Ginkgo, Ginkgo biloba. It has been used in traditional medicine to treat circulatory disorders and enhance memory. Kava kava, Piper methysticum, is said to elevate mood, well-being, and contentment and produce a feeling of relaxation. Saw palmetto, Serenoa repens, is used by more than two million men in the US for the treatment of a non-cancerous enlargement of the prostate gland. Echinacea preparations, from Echinacea purpurea and other Echinacea species, are said to improve the body’s natural immunity.

Should the excited claims of the supplement industry be dismissed out-of-hand? Maybe, but maybe not, said Lubahn. In many cases, these remedies have been used for hundreds of years by traditional healers and satisfied customers. “There must be some sort of recognizable benefit to this use, or why would they continue using them,” Lubahn said. “Nature has thousands of secrets that we have yet to discover. What we are doing may be a step in uncovering some of those secrets.”