In the nineties, Missouri’s dairy industry was in trouble.  More than 50 percent of the state’s dairies had disappeared, leaving fewer than 2,000 of the businesses operating in 2000.

A primary reason was that Missouri’s cost of production — labor, operating costs and overhead — matched those of Southeastern states as the highest in the nation. According to the USDA’s cost of production calculations, where California producers could deliver a hundred-weight of milk for about $18 in production costs, those same costs in Missouri and other Southeastern states was more than $25. This was at a time when milk sold for a few cents more than $18 per hundred-weight.

The loss of these businesses just didn’t impact the state’s economic health, but saw the disappearance of a way of life for many long-time Missouri dairy farmers who had to take city jobs or go into another line of agriculture.

Families who stayed in dairy often became weary of the demands of their livelihood — getting up at 5 a.m. to milk and not stopping work until late in the evening for 365 days a year.

When environmental compliance regulations became tighter for confinement-style farms that concentrated animals in a very small area, a downward economic trend looked like it would only deepen.

To find a solution, 14 University of Missouri agronomists, economists, nutritionists, dairy specialists and researchers formed an ad-hoc Pasture-Based Dairy Team to figure out ways to improve the economics, lifestyle and environmental concerns of dairy in Missouri.  They came up with what, on the surface, seemed like a counter-intuitive solution — abandon the confinement-style methods of dairy and put the cows back in the pasture to graze. 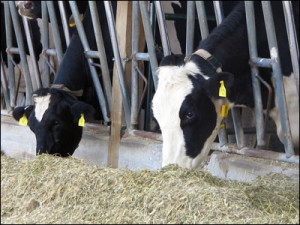 Historically, almost all dairies used pasture-based, grass-grazing for the cows.  In the 1970s in areas where corn silage or alfalfa hay were readily available, dairies transitioned to confinement operations.

Here, the cows were largely kept indoors and fed to reduce labor costs and raise production efficiency.  Initially, the change worked and most farms converted to confinement systems in the 1980s and early 1990s.

While higher fuel and feed costs began to hurt confinement dairying in Missouri, it was economics of scale that really delivered the financial blows.  Most Missouri dairy farms are small, 50 to a few hundred cows.  These farms could not compete, on a per-unit basis, with the huge operations of thousands of cows in the American West.  Missouri farms were doing many of the same things as the large concerns, but were economically failing due to the high overhead costs of small herds.

A change in thinking was needed

The MU team investigated and found that the ancient methods of pasture-based production were a uniquely sound economic model for Missouri.  The state has about 11 million acres of pasture and hay lands that are not much good for anything but grazing.  This grass, compared with corn, is significantly cheaper.  Also positively impacting the farmer’s bottom line was the reduced need for labor to feed the cows who, basically, did what came naturally. 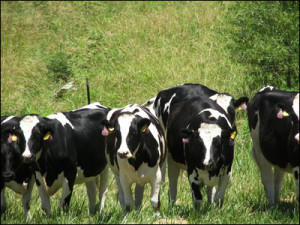 Cows roaming the pastures eliminated another bit of labor, too. In a confinement system, someone must collect the manure and use machinery to spread in the pasture to recycle the nutrients. The cows accomplish this by themselves when they are in the pasture.  In effect, the pasture-based system employed the cows to harvest their own food and recycle their own manure.  With the economic impact, farmers saved labor costs and had more free time for something other than chores.

The team took their research and created two books, the Dairy Grazing Manual and Forages and Weeds of Pastures.  In 1994, they began distributing the data and held their first dairy grazing school to spread the word.

In 1999, a seasonal, 90-acre, 75-cow rotational grazing dairy experimental farm was established at MU’s Southwest Center to fine tune the new process and try other ideas in financial management, dairy nutrition, reproduction and other production issues.

Extension agents kept farmers apprised of the progress.  Groups of dairy managers organized to share ideas, experiences and tour other farmers’ operations.  These peer-to-peer groups are still meeting and refining their techniques.

Missouri climate one of the reasons for success

Robert Kallenbach, MU associate professor of agronomy and part of the team, said another reason why pasture-based dairy works in Missouri is the state’s climate.  It has enough rain so little irrigation is needed.  It is far enough south so the cows don’t need to be housed in barns during the winter, and far enough north so there is no long period of heat stress in summer.  Land prices are still low enough to make a small business viable and there is enough supporting milk-distributing infrastructure to keep transportation costs fairly low.

By 2006, the transformation was so successful that a national grazing conference with attendance from 21 states was held in Missouri to look at the new model.  Young people, who were abandoning the industry for easier jobs, began to come back to the farm.  As pasture-based farms are less capital-intensive to start, first-time dairy farmers began to appear, too.

Attention not only came from other farm states, but international concerns as well. Investors form Ireland and New Zealand looked at the increase in Missouri productivity and brought their money.

Dairy cows now produce five to 10 times the profit of their cousins, the beef cow

The economic impact?  In 2008 the number of Missouri dairy cows in pasture-based systems was ten times larger than a decade before.  $100 million of new investment flowed into the industry.  Best yet, these new style Missouri dairies left the high costs of neighboring Southeastern states behind.  Where those states now spend as much as $30 to produce a hundred-weight of milk, a 600-cow Missouri farm costs exactly half that.  A 300-cow Missouri farm spends about $17 per hundred-weight at a time when milk prices are about $19 per hundred-weight.

Those numbers mean that, while fewer in number, dairy cows produce five to 10 times the profit of their cousins, the beef cow.  A top-notch grazing dairy may average about $1,000 above operating expense per cow annually. 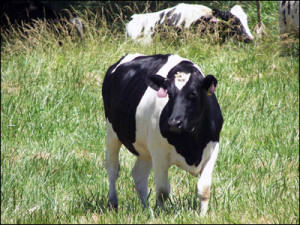 And the positive impact goes beyond just dollars.  In a survey by the team, 77 percent of producers reported greater job satisfaction and 71 percent said they have more leisure and family time.

To further enhance this quality of life, the MU team envisioned a way to synchronize artificial insemination so calves would be delivered at roughly the same time — giving farmers the luxury of an occasional vacation.

No quality of life surveys have been taken from newest partners in the project, the cows.  To date, they have taken their new duties in stride, happily munching grass and contributing to the dairy’s bottom line.