Kathleen Kelsey, a CAFNR  graduate in animal sciences (B.S. ’00 and M.S. ’04), combed debris looking for those still alive in the aftermath of the Joplin, Mo., tornado as a member of a Missouri search-and-rescue team.

Kelsey is a canine search specialist with the Missouri Task Force 1 search-and-rescue team. She works with her rescue dog ChicoDog. 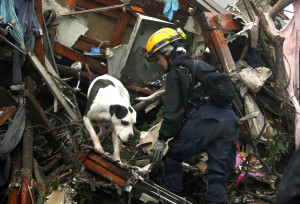 Kathleen Kelsey searches through the wreckage of a public housing complex in Joplin, Mo.

Task Force 1, a division of the Boone County Fire Protection District, is one of only 28 FEMA Urban Search and Rescue teams in the country specializing in rescue operations in structure collapses. Each of the 28 teams has specialized equipment designed to perform breeching and breaking of concrete and heavy steel, state of the art search equipment including both visual and acoustical devices, medical equipment and K-9 search teams.

Missouri Task Force 1, which is made up of all volunteers, has performed search and rescue activities at the World Trade Center, made two deployments to Hurricane Katrina in New Orleans and aided at several other disasters throughout the United States.

Kelsey joined Missouri Task Force 1 shortly after September 11, 2001. “While watching the news on 9/11, I saw one of the dog handlers who went with the team to the World Trade Center,” Kelsey said. “I recognized her­­ — she taught a dog obedience class that I had previously taken with my dog during undergrad. It was one of those light bulb moments – that’s how I can help. With the support of my adviser, Dr. Peter Sutovsky, I was able to join the team and begin training while working on my master’s.”

Missouri officials say the death toll from the massive May 22 Joplin tornado has risen to 141 people.  It is the deadliest single twister in US history since the National Weather Service began keeping records 61 years ago.  More than 8,000 homes and apartments and more than 500 commercial properties were damaged or destroyed when the twister ripped through more than six miles of the southwest Missouri town.

“When we arrived on scene, I just stood there and looked around – complete devastation as far as the eye could see. The pictures I had seen did not prepare me,” Kelsey said.

The Sunday-evening tornado chewed through a densely populated area of the city, causing hundreds of injuries as it tore apart homes and businesses, ripped into a high school and caused severe damage to one of the two hospitals in the city. Based on preliminary estimates, the twister ranked as an EF-5 with winds greater than 200 mph.

Officials say everyone reported missing after the tornado hit has either been located or confirmed to have died. Some remain hospitalized.  At the height of the rescue effort, people from more than 40 agencies were on the ground in the southwest Missouri city, with two first responders struck by lightning as they braved relentless rain and high winds searching for survivors.

“The stories of how neighbors were helping neighbors escape their houses immediately following the tornado really surprised me. And in addition to all they had to deal with, they were still concerned about the care of the rescue workers,” Kelsey said. “The college, Missouri Southern State, opened their dorms for us to stay in, community members and volunteers rallied to provide water, food and basic hygiene, all in a matter of hours after the tornado. Amazing!”

Kelsey has started a non-profit, Calvary Canine, in honor of Calvary Episcopal Church in Columbia who donated the money to purchase and train her first rescue dog, Calvary. She is currently working to grow her organization so that it can support the training of more of these dogs with such skills and contributions to their community.

Kelsey also works remotely as a Research Coordinator with the Penn Vet Working Dog Center based out of the University of Pennsylvania’s Vet School.