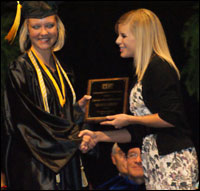 Samantha Wilkerson, an Agribusiness Management graduate, was presented the 2011 CAFNR Senior of the Year Award by Jana Haley, president of the CAFNR student council.

More than 400 students received their diplomas and headed out to all parts of the globe to pursue careers in diverse fields as economics, biochemistry, journalism, plant science, food science, meteorology, hotel and restaurant management, and forestry.

MU held its first graduation ceremony in 1843 with two graduates, Robert B. and Robert L. Todd, cousins of Mary Todd, Abraham Lincoln’s wife. MU’s colleges and professional schools in 2011 will confer degrees to 5,319 students on graduation weekend, May 13-15.

CAFNR’s commencement speaker was U.S. Sen. Claire McCaskill. She was born in Rolla and raised in Lebanon and Columbia, McCaskill lived in Houston, Mo., where her father William worked at the McCaskill Feed Mill. She graduated from the MU Law School. She then clerked for the Missouri Court of Appeals in Kansas City, and then got a job as an assistant prosecutor in Kansas City, where she was a felony trial prosecutor handling sex crimes, homicides and specializing in arson cases. In Nov. 2006, she became the first woman elected to the US Senate from Missouri.

Earning this year’s CAFNR Senior of the Year honors was Samantha Wilkerson, a native of Paris, Mo. who graduated with a degree in Agribusiness Management. She was nominated by her class and selected by the CAFNR Student Council.