On March 4 he was given the first President’s Early Career Award from the University of Missouri System. Colleagues surprised Thelen with the award announcement during a weekly biochemistry seminar. 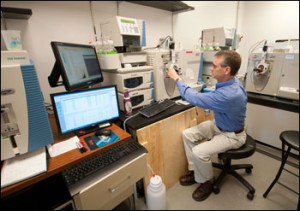 In April, he received notification that he was the 2011 recipient of the MU Chancellor’s Award for Outstanding Research and Creative Activity.

The President’s award recognizes a faculty member who exhibits exceptional promise in the first seven years with the UM System. This promise may be demonstrated in scholarship, research or creativity. The formal award will be presented in June at a Board of Curators meeting.

The Chancellor’s award recognizes MU faculty members who are still in the developmental phases of their careers, have made outstanding contributions in research and/or creative activity, and have great promise for achieving wider recognition. The selection committee chooses individuals whose accomplishments are impressive and yet, as mid-career professionals who are rising in their fields, have not yet reached the senior level in their particular field of endeavor.

Most of Thelen’s research centers on the large-scale study of proteins and their post-translational modifications, an emerging discipline known as proteomics. His lab is involved in the development and validation of cutting edge technologies used to identify and quantify proteins, requiring the use of advanced mass spectrometry instrumentation. Using these technologies his lab is gaining an understanding of plant seed development from the perspective of the proteins dynamically expressed in the cell.

“Jaycombines a deep involvement in fundamental biochemistry with an ability to advance cutting-edge technology, said Jerry Hazelbauer, chair of Biochemistry. “His work has generated both basic insights and practical applications in the seed industry.”

Thelen also studies various aspects of plant metabolism, including the regulation and engineering of fatty acid synthesis. Towards this goal his lab employs genomic, molecular and biochemical approaches to gain a systematic understanding of plant metabolism.

Since joining the Biochemistry Department in 2004, Thelen has received more than $6.2 million in extramural funding, published 46 manuscripts in international journals and authored the book “Plant Proteomics.”

Collectively, his research publications have been cited more than 1,200 times as determined by Google Scholar. His research and programs have been highlighted by popular press and international journals and magazines such as Plant Cell and Plant Physiology and Genome Technology. He has received 25 speaking invitations from various academic and corporate affiliations, as well as international conferences.

Thelen currently serves as associate editor for two journals and ad hoc reviewer for approximately 20 other journals. He was recently awarded an Organization for Economic Co-Operation and Development Fellowship for a sabbatical leave in 2011 to collaborate with three principal investigators located at Oxford University in the UK, Aarhus University in Denmark and Southern Denmark University to study oxidative damage to proteins and the influence on mitochondrial stress response.