Obesity changes a person’s glucose and fat metabolism, leading to insulin resistance that triggers chronic diseases like Type 2 Diabetes and cardiovascular illness. James Perfield, assistant professor at the University of Missouri specializing in nutrition and the physiology of metabolic diseases, has identified a plant oil that seems to interrupt the development of obesity-triggered insulin resistance. 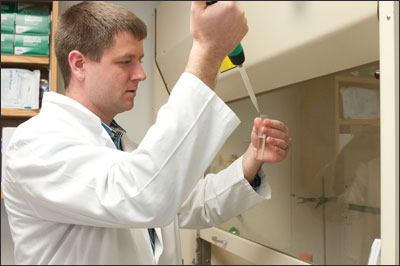 Perfield compared the health of two sets of lab rats that have a genetic propensity to obesity. One group was fed a standard rat diet while the other got the same food with a small amount of sterculic oil added.

During a 13-week study, the rats were given metabolic tests to monitor their body weight, body fat and glucose metabolism. Control rats became obese and insulin resistant, as expected. Rats given the sterculic oil supplement also became fat, but had a 50 percent improvement in insulin resistance. His findings were recently reported at a Keystone Symposium on Type 2 Diabetes, Insulin Resistance and Metabolic Dysfunction held in Keystone, Colo.

Insulin resistance is a condition where tissues in the body do not respond to normal levels of insulin, a hormone responsible for maintaining blood glucose levels. Initially the body compensates by producing more insulin, but eventually the pancreas is unable to produce enough insulin and excess glucose builds up in the bloodstream setting the stage for diabetes, cardiovascular disease and other obesity-associated health disorders. 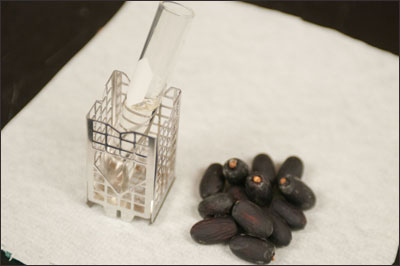 While this initial study suggests sterculic oil may provide a non-pharmaceutical approach to treating insulin resistance, Perfield cautions that additional rigorous testing is still required. “To be used as an effective therapeutic, we must thoroughly understand the mechanism by which sterculic oil improves insulin resistance and ensure that there are not unexpected side effects associated with the supplementation,” he said.

The dose of oil that improved the rats’ metabolism was surprisingly small – comparable to a 250 lb. person eating three grams of this oil per day. This is easily feasible dose either as a supplement or incorporation into food and drink, Perfield said.

The research was hosted by the MU College of Agriculture, Food and Natural Resources’ Food Science Department and the Department of Nutrition & Exercise Physiology, a joint program by CAFNR, the College of Human Environmental Sciences and the MU School of Medicine. The research was funded by the Diabetes Action Research and Education Foundation, MU Food for the 21st Century and CAFNR.

Perfield hopes the research will result in a natural, nutrition-based supplement. Several pharmaceutical companies currently market drugs to treat insulin resistance and diabetes. The development of new drugs continues to be an active area of research within these companies.

Nearly 33 percent of American adults over 20 years of age and 17 percent of children are clinically classified as obese in the US. Obesity is associated with 400,000 deaths annually, and related health care costs are estimated at $120 billion each year.

Diabetes affects eight percent of the population (25.8 million people in US) and 30 percent of those over 65 years of age. Diabetes is a major cause of heart disease and stroke and the seventh leading cause of death in the US.