The University of Missouri College of Agriculture, Food and Natural Resources will investigate the economic impacts and best marketing strategies of new soybean seed technologies designed to improve US production. 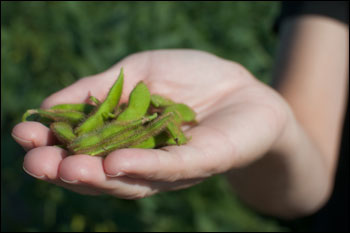 MU is one of 18 US institutions that will participate in a USDA $9.28 million Agriculture and Food Research Initiative grant. Research centers on oomycetes, a fungus-like micro-organism that causes root rot in soybeans, reducing crop yields. Multi-disciplinary research teams were assembled nationally to develop a wide variety of strategies to combat the disease and get those technologies to farmers.

Damage to the US soybean crop caused by diseases associated with oomycetes, like root and stem rot, is estimated to be more than $300 million each year.

Nicholas Kalaitzandonakes, the Missouri Soybean Merchandizing Council Endowed Professor of Agribusiness Strategy and director of the MU Economics and Management of Agrobiotechnology Center (EMAC), will lead the research at MU.

“To maximize their impact, new technologies must marry superior science with market intelligence,” said Kalaitzandonakes. “MU will analyze the economic impacts of the new seed technologies and will develop market placement strategies to maximize their uptake by US farmers.”

EMAC is a research institute that provides data-based analysis of economic, management and policy issues affecting decision-making in agrobiotechnology. The center is devoted to the study of the effects of biotechnology on agriculture and the food production and value chains.

As the nation’s second largest crop with more than $30 billion in farm value, soybeans are important to US economy, explained Kalaitzandonakes. “This importance will only grow as soybean use for, food, feed and fuel continues to expand in the US and around the globe. By helping to mitigate some of the major soybean diseases, this project will support the continued effort of the US farmers to increase productivity in an economically and environmentally sustainable way.”

Strategies the team develops to mitigate oomycete diseases of soybeans can be applied to other plant species. These destructive diseases also impact other plants important to agriculture, horticulture, forestry and natural ecosystems. These include potatoes, tomatoes, peppers, squash, cucumbers, grapes, most fruit and nut trees, and many ornamental nursery plants.

In 2009, approximately 74.7 million acres of soybeans were harvested in the US. The economic impact of soybeans is second only to corn around the nation. Missouri is fifth in the country for soybean production, accounting for about $2 billion in sales. US soybean exports were estimated at 1.1 billion bushels in 2009.