Tornado Alley, the swath of prairie from Texas through Oklahoma, Kansas and Missouri famous for twisters, may see a largely calm tornado season this year.

The same dominant atmospheric phenomenon that spawned winter blizzards through much of the country generally shifts spring and summer thunderstorm activity northward, says Tony Lupo, professor of atmospheric science at the University of Missouri College of Agriculture, Food and Natural Resources.

The impact of La Niña is most clearly seen in wintertime, Lupo stated. It tends to bring cold weather extremes to parts of the nation. La Niña’s opposite, El Niño, is associated with warmer water temperatures. In the continental U.S. during El Niño years, temperatures in the winter are generally warmer over the north, Midwest and east. 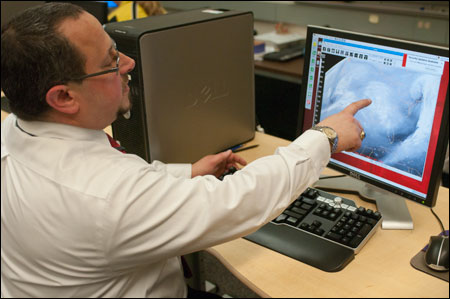 Both climate phenomena, which typically trade places every 3-6 years, influence weather patterns throughout the world.

Lupo says that La Niña tends to shift the jet stream patterns northward over the U.S. In a La Niña season, the jet streams pick up warm Pacific moisture and direct their cargoes of warm and unstable air to Nebraska, Iowa, Illinois and Indiana. Storm systems tend to follow these streams.

“There has to be heat and moisture to build severe thunderstorms,” Lupo says. “An atmosphere that is too cold or dry will not produce dynamic cloud systems like super-cell storms. When the jet stream is farther north, as it is in a La Niña event, you have a better chance of achieving these kinds of temperatures and dew-points in these parts of the country.”

“There is no statistical data that storm intensity or duration differs between La Niña and El Niño years nationwide,” Lupo states. “However, our data from the 1950s and 1960s relied on human observation which can be spotty and inaccurate. We only have a few years of reliable national Doppler radar and satellite imagery.”

Tornado Alley may see an unusually calm year for another reason, Lupo said. Atmospheric models predict a dryer than normal spring and summer, taking away the fuel for super-cell development.

The National Oceanic and Atmospheric Administration charts La Niña patterns through monitoring buoys in the Pacific Ocean. NOAA observed a strengthening La Niña in August 2010 and predicts that it will continue through 2011.

Lupo is a member of the Global Climate Change Group, a group that researches planetary-scale atmospheric processes, specifically a phenomenon called atmospheric blocking. Here, stalled large scale anticyclones impact not only on the regions in which they occur in, but also regions upstream and downstream of the event.