A team of scientists from disparate disciplines at the University of Missouri have found preliminary evidence that a compound from a nuisance tree that hinders farming could be a new anti-microbial agent effective against a dangerous infection plaguing hospitals. 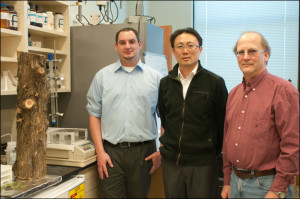 The team, consisting of agroforestry, biochemistry and veterinary pathobiology researchers, recently shared their research results with colleagues at the International Conference on Gram-Positive Pathogens in Omaha. Their next step is to discover exactly how the compound works, determine if the compound has any toxic effects and evaluate other potential disease-fighting compounds isolated from the tree.

An Undervalued and Underappreciated Tree

The Eastern Red Cedar (ERC) is one of the most widely distributed American tree species. There are about 500 million of them in Missouri, and their range extends from Kansas to the east coast.

A resilient tree with either needles or narrow leaves, ERC survives in even the poorest soils. Once used widely by Native Americans, ERC berries today are a desirable food for birds. Unfortunately, birds spread ERC seeds widely and it is invasive on farm, forest and pasture land. Farmers actively destroy them. ERC trees contain chemicals that burn readily and were blamed for the rapid spread of Oklahoma and Texas wildfires in 2005 and 2006.

A study to determine uses for ERC trees was conducted a decade ago by another team of researchers from the MU Center for Agroforestry led by forestry research professor and Center Associate Director Mike Gold. The study demonstrated that ERC trees have a wide array of economic uses with an estimated national market value exceeding $60 million. Their findings uncovered intriguing studies that led to the current work on the medical uses of ERC. 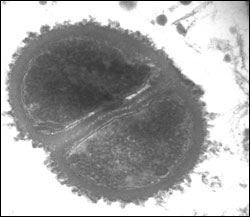 In 2007, Chung-Ho Lin, a research assistant professor in the MU Center for Agroforestry, was given the assignment to find a commercial use for ERC trees with funding from MU Center for Agroforestry. Lin is one of the MU School of Natural Resources’ go-to guys in finding novel uses for trees. His research is finding ways how trees and perennial grasses can safely soak up and break down dangerous agrochemicals and munitions waste in soil.

“I was told to find an entrepreneurial use for this ‘trash tree’ so land owners could put their energy into profiting from them instead of cutting them down,” Lin said. “I thought it was a fun challenge.”

Lin aimed his initial investigation at building on existing research showing anti-bacterial potential of ERC-derived compounds and rumors of its effectiveness as a traditional herbal remedy for acne. Then he developed a series of purification processes to isolate the bioactive compounds.

When Lin’s research began to see solid results in ERC’s anti-microbial characteristics of the compounds he purified, he shared the stats with friends in the College of Veterinary Medicine’s Department of Pathobiology and MU’s Department of Biochemistry. Intrigued, Brian Thompson, Department of Biochemistry, and George Stewart, professor and department chair of Veterinary Pathobiology, among others, formed an interdisciplinary team to take Lin’s initial findings and identify and isolate the most promising phytochemicals, biologically active organic chemicals, from ERC tissues.

“It was exciting to tackle the research from three widely different disciplines,” Thompson said. “We each brought a very different perspective to the research.”

Their tests showed that chemical compounds derived from ERC needles and bark were effective as a topical acne treatment. They also found out that the ERC compounds were a strong anti-microbial agent against a wide range of human bacterial pathogens, including tetanus, botulism, strep throat, Listeria and Salmonella germs, cholera, and anthrax.

Interestingly, it took a relatively small concentration one of their ERC compounds – just 5 micrograms per milliliter – to be effective against one of the most dangerous types of bacteria – methicillin-resistant Staphylococcus aureus (MRSA), the superbug infection that plagues many hospitals.

MRSA is a bacterium responsible for several difficult-to-treat infections in humans. It is especially troublesome in hospitals where patients with open wounds, invasive devices and weakened immune systems are at increased risk of infection.

According to the Centers for Disease Control and Prevention (CDC), while approximately 75 percent of “community-associated” MRSA infections are localized to skin and usually can be treated relatively easily, healthcare-associated MRSA infections are much more dangerous and can affect vital organs and lead to widespread infection, toxic shock syndrome and “flesh-eating” pneumonia. 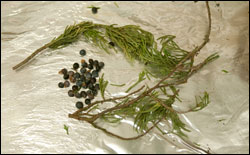 The MU researchers tested many versions of MRSA in the test tube with promising initial results.

Stewart cautions that the MU research is still in too early of a stage to speculate how effective an ERC-derived treatment for MRSA would be. “We still have to determine how this is working on a molecular level and then assure that it poses no toxicity threats before we consider anything resembling clinical trials,” Stewart said. “We acknowledge how exciting a potentially new topical or oral treatment for MRSA would be, but we are at least a year away from anything product worthy.”

So far, the MU team has successfully isolated 17 bioactive compounds from the fruit and leaves of the Eastern Red Cedar trees with a few being more effective than others. “We plan on looking at 14 other active compounds isolated from the oil, bark, and other tissues or byproducts of ERC,” Thompson said.

As if a potential treatment for MRSA was not enough, some of the compounds also initially tested positively as a method to inhibit melanin production in certain mouse-derived melanoma cells. In the test tube, the ERC compound inhibited the cancer cell’s ability to divide, leading to them eventually rupture and die.

Stewart said that any clinical testing could be years in the future and would require the small team to expand and recruit experienced clinical trials experts.

While this occurs, Lin and his agroforestry colleagues will continue to look at ways to help Missouri land owners utilize their ERC trees as a new Missouri cash crop – his original challenge.

“I’m hopeful that I am fulfilling my mission to develop a new use for the red cedar tree,” Lin said. “I’m excited about this project. It’s really been fun.”