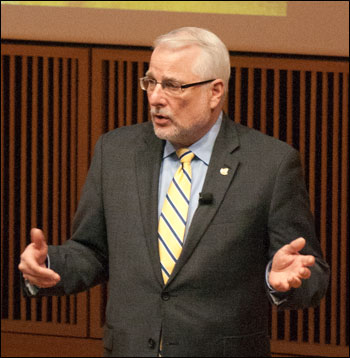 David White, chief of the Natural Resources Conservation Service, has seen positive changes in conservation since his graduation from the University of Missouri in 1980. Most important, he said, is the realization that agriculture and conservation can work in partnership for the benefit of both.

White spoke to MU conservation, agriculture and other students recently as an Executive-in-Residence, a program by the College of Agriculture, Food and Natural Resources to provide one-on-one interaction between students and leaders in business and government.

White gave the students insight into how the conservation service worked. He highlighted its programs, conservation trends and advice to students on career opportunities in the field.

White was named chief in 2009. He began his 33-year career with the Natural Resources Conservation Service (NRCS) as a conservation aide in Missouri. He later has served in South Carolina, Montana and its Washington D.C. headquarters. He leads 12,000 employees and manages a $4 billion-plus budget. 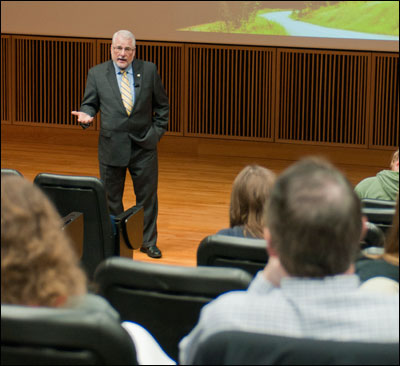 From 2002 to 2008, White was assigned as the NRCS State Conservationist in Montana. For much of 2007 and 2008, he was detailed to Sen. Tom Harkin’s Capitol Hill office, where he helped the Senate Committee on Agriculture, Nutrition and Forestry craft the Conservation Title of the 2008 Farm Bill.

He also assisted the staff of Sen. Richard Lugar, in support of agriculture committee work on energy and alternative fuels and the 2002 Farm Bill. He was assigned a tour of duty in the White House Task Force for Livable Communities.

White is a 1980 honors graduate in agriculture in what was then known as the MU College of Agriculture. He and his wife have a grown son and daughter.

NRCS, an agency of the USDA, works with landowners through conservation planning and assistance to benefit the soil, water, air, plants and animals for productive lands and healthy ecosystems. The organization has field offices at USDA Service Centers in nearly every county.

During a formal talk at the Monsanto Auditorium in the Bond Life Sciences Center, White told students that farmers and wildlife can co-exist. He cited how rice farmers are flooding their fields to create temporary wetlands for migratory birds, how ranchers across the West are preserving the habitat of the sage grouse, and how farmers in the Delta of Mississippi are helping to bring the Louisiana black bear back from the point of extinction.

He also pointed out how a Utah farmer dramatically reduced the cost of running a center-pivot irrigation system by replacing a $15,000 a year diesel-powered system with a 50 cent a day water-powered gravity feed system, and how an air quality improvement project with farmers in the central valley of California has had the effect of removing more than 400,000 cars from the roads in California. 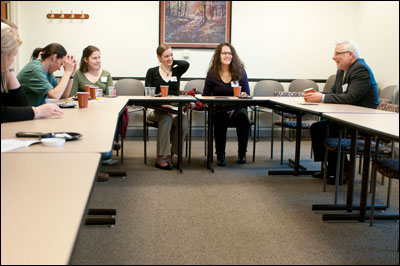 “Science and technology are critical to good conservation,” he continued. “NRCS experts from many disciplines come together to help landowners conserve natural resources in efficient, smart and sustainable ways. NRCS succeeds through partnerships, working closely with individual farmers and ranchers, landowners, local conservation districts, government agencies, tribes, Earth Team volunteers, and many other people and groups that care about the quality of America’s natural resources.”

Seventy percent of the land in the United States is privately owned, making stewardship by private landowners absolutely critical to the health of our Nation’s environment, White said.

The CAFNR Executive-in-Residence Program was endowed by the generosity of the Robert Reich family. The program, inaugurated in 1997, takes place in an informal environment that allows participation to be spontaneous.