They pop up in farm fields across 22 states, and they’ve been called the single largest threat to production agriculture that farmers have ever seen. They are “superweeds” – undesirable plants that can tolerate multiple herbicides, including the popular gylphosate, also known as RoundUp.

Superweeds cost time and money because the only real solution is for farmers to plow them out of the field before they suffocate corn, soybeans or cotton.

Now, thanks to the work of researchers at Dow AgroScienceswho have been collaborating with a University of Missouri researcher, a new weapon may be on the horizon to eliminate superweeds. 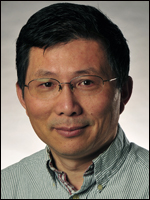 Zhanyuan Zhang, a research associate professor of plant sciences and director of the MU Plant Transformation Core facility, partnered with research scientists at Dow AgroSciences to engineer soybean plants that can tolerate an alternative herbicide that may help slow the spread of superweeds, such as tall waterhemp.

According to an article in the May 3 edition of the New York Times, farmers considered RoundUp a “miracle chemical” when it was introduced because it killed a wide variety of weeds, is safe to work with, and broke down quickly, reducing environmental impact. However, weeds quickly evolved to survive gylphosate, and that threatened to reverse an agricultural advance known as minimum-till farming.

As the superweeds survive in the fields, farmers must spend more time to get rid of them, even going so far as pulling the weeds by hand. The Times noted that there were 10 resistant species in at least 22 states infesting millions of acres of farmland.

Using a massive genetic database and a bioinformatic approach, Dow AgroSciences researchers identified two bacterial enzymes that, when transformed into plants, conferred resistance to an herbicide called “2,4-D,” commonly used in controlling dandelions. The enzymes were successfully put into corn and soybean plants, and those new plants showed excellent resistance to 2,4-D, including no negative effects on yield or other agronomic traits.

Other advantages of 2,4-D include low cost, short environmental persistence, and low toxicity to humans and wildlife.

“Unlike glyphosate, which targets amino acid synthesis, 2,4-D is a hormone regulator. Because it has a different mode of action, 2,4-D is an ideal herbicide to deal with glyphosate-resistant weeds,” said Zhang, who managed the soybean transformation portion of the study and contributed to some data analysis.

Zhang believes that 2,4-D could eventually be combined with other herbicides in the near future. In the meantime, Zhang says an integrated weed management plan can help farmers be productive and ultimately save money for the consumer.

“The less chemicals farmers use in the field, the less money they spend on production,” said Zhang. “That leads to less cost for the consumer, as well as improved food safety and environmental safety.”

Study results were published in the November issue of The Proceedings of the National Academies of Science.