‘Tis the season for the holiday party with plates of tasty meats, creamy pies and veggies and dips. But be careful says Andrew Clarke, associate professor of food science at the University of Missouri College of Agriculture, Food and Natural Resources. Unless properly handled, these treats can send you home with a case of food poisoning as a holiday gift. 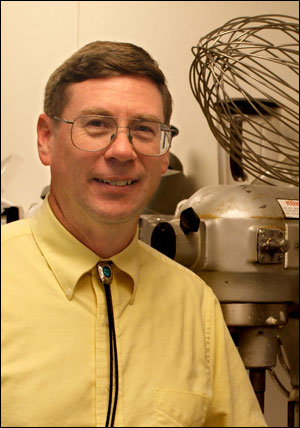 While there are no firm medical statistics on how many cases of nausea and diarrhea occur from eating at the holiday buffet, the feast is ripe for contamination, Clarke says.

Holiday food handled by several people creates the risk of staphylococcus aureus contamination. When staph bacteria, commonly found on skin, noses and throats, gets into food, it multiplies rapidly at room temperature to produce a toxin that causes illness within six hours. Staph is most often found lurking in party foods that are made by hand and require no additional cooking, such as cold cuts, potato salads, cream pies and sandwich fillings.

Then, Clarke relates, there’s clostridium perfringens, nicknamed the “cafeteria germ” because it tends to hang out in foods served in quantity and left out at room temperature. Meats and gravy are most often associated with this bacteria.

Probably the third most prevalent party poisoning is caused by listeria monocytogenes. Because it can grow in a refrigerator, listeria is typically found in cold foods often served at buffets, such as deli meats and smoked salmon. The bacteria is especially harmful to pregnant women – they are 20 times more likely than other healthy adults to get the infection, and the consequences can be deadly for the unborn baby.

According to the Centers for Disease Control and Prevention, an estimated 76 million incidents of food poisoning occurs in the United States annually, resulting in 325,000 hospitalizations, and up to 5,000 deaths each year.

“I suggest you maintain awareness of what people are using to scoop up the food and walk away if you see something that you don’t like,” Clarke says. “Also, beware of the ‘double-dipper,’ the person who plunges a celery stick into a dip, takes a bite, and then puts the uneaten half of celery back into the dip for a second taste. Not only is this socially unacceptable, but it introduces oral microbes into the dip for the next person to consume.” 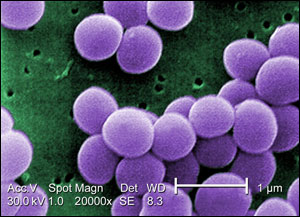 The bacteria staphylococcu aureus as seen under a scanning electron microscope.

Dangerous bacteria like clostridium perfringens can begin to grow on unrefrigerated meat and dairy products in as little as an hour, Clarke said. He advises holiday chefs not let cooked foods or food that needs refrigeration remain out at room temperature for more than two hours. Instead of setting out one large serving for the duration of the party, hosts should separate the foods into separate smaller dishes that can be brought out of the refrigerator or oven as needed.

Nesting cold foods in dishes of ice, or serving hot foods from a slow cooker, will prolong the serving life of the foods.

Dumping fresh goodies onto food that has been on the table for awhile is a sure way to spread bacteria, Clarke says. 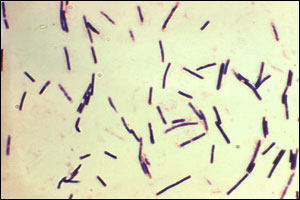 Clarke suggests that guests make their plates early, especially if cold food isn’t on ice or hot food isn’t on a burner. “Don’t go back for one more taste if the food has been out for than two hours,” he cautions.

Pies with milk or cream will also spoil in about two hours after they have left the refrigerator, Clarke points out. Breads and cookies, and the perennial holiday favorite fruitcake, have much longer shelf lives.

Certain foods are best avoided at the buffet table, Clarke says. Hot dogs, soft cheeses and deli meats can harbor listeria. This bacteria that can cause miscarriages, birth defects and stillbirths. Guests should also be cautious of raw oysters, mousse, steak tartare or rare hamburger.

Holiday favorites, including cookie dough, hollandaise sauce and homemade eggnog are potential culprits, too. These can contain raw eggs that potentially harbor salmonella. Products with raw eggs can spoil very quickly, too. People bringing pot luck items should be aware that many people have food allergies to peanuts, tree nuts, shellfish, eggs and dairy products.

Holiday leftovers are another potential threat. Clarke says that if leftovers haven’t been refrigerated within two hours of serving, they should be discarded. Many properly saved leftovers will stay safe in the refrigerator for up to four days. “Whether you store your leftovers in the fridge or the freezer, it’s still necessary to reheat the food thoroughly to 165 degrees,” Clarke said. Use a thermometer to ensure reheated food is hot enough, he suggests.