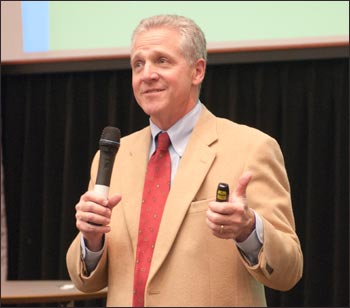 Mizzou makes it worth coming home. Bill Buckner, BS, Ag Econ ’79, came home to Missouri November 12-15 as the 36th Reich Family Executive-in-Residence. Buckner is the CEO and president of Bayer CropScience, LP, and grew up on a farm in Mexico, Mo. Since he graduated from CAFNR, he has moved across the country and around the world to places from Centralia, Mo., to Monheim, Germany, to Calgary in Alberta, Canada.

Buckner’s visit to campus encompassed many activities from a seminar about traits of executive leadership to a home football game, from a reception at the Heidelberg to teaching a global agriculture class. Students and faculty were delighted to interact with Buckner. 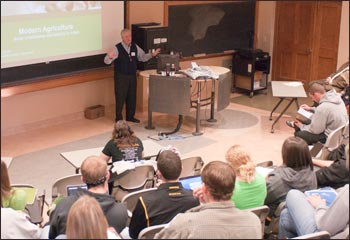 “Having the opportunity to listen to and converse with Mr. Buckner gave me not only the chance to interact with a high-level executive but also allowed me to see that students who come from an agricultural background can be very successful in the corporate world,” Shannon Webber, a senior agricultural economics CAFNR student.

Buckner said that he felt that CAFNR had given him so much, and it was time for him to give something back.

“Both Kathy and I truly enjoyed meeting everyone and renewing old ties to ‘Old Mizzou’,” he said.

Buckner hopes his visit inspired some thought and future debate with CAFNR students. The students he met said that during Buckner’s time as executive-in-residence, he did just that. 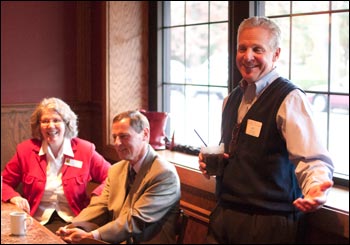 “I gained a sense of understanding that you can achieve if you meet the right people and focus your time and efforts,” Brandon Nystrom, CAFNR student majoring in agricultural economics, said. “He has helped to inspire me to continue after my goals and be active and friendly with those I meet.”