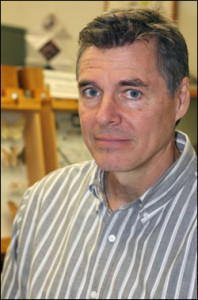 Is a little-known predator insect that lives its life underwater in the tropics the cause of an outbreak of a mysterious flesh-eating disease? Robert Sites, entomologist and professor of entomology at the University of Missouri, recently returned from Tanzania with specimens that may help other scientists and physicians answer that question.

Sites, who has been studying this group of insects for more than two decades, is creating a scientific description of bugs from the Naucoridae family. Anecdotal evidence from people afflicted with Buruli ulcer, a skin-destroying disorder, suggest a bug bite triggers the disease. It was recently discovered that certain Naucoridae members harbor the disease’s causative organism in their salivary glands.

Sites’ work will describe distinguishing features of the suspected species. His work, when published in entomological scientific journals this summer, will help other researchers and physicians to better scientifically identify and understand the bugs.

His work is also noting the locations and populations of the Naucoridae family in Tanzania where the disease seems to be spreading. Until recently the bugs attracted little attention. They were considered beneficial as they eat mosquito larvae, a contributor to the malaria epidemic.

Still another aspect of his work is to review the existing scientific literature and assemble what few facts are known about the biology and ecology of the African versions of the family. “Naucorid ecology and their life histories have been little studied, with the exception of only a few temperate species,” he said. “Virtually no information exists for tropical species in this primarily tropical family.”

Naucoridae is a family of aquatic insects commonly known as creeping water bugs. They live in ponds and still waters. They’re prevalent in tropical and sub-tropical Africa, Asia, America and Australia. Worldwide, there are 36 genera and 370 described species within the family, two of which are now known to harbor the causative organism of the disease.

The dark brown insects have strong front legs adapted for grasping prey. In An Introduction to the Study of Insects, it is noted that “Naucoridae will bite quite readily – and painfully – when handled.”

Sites collected nine species of these insects in Tanzania. Two of them appear to be new to science.

The disease starts as a painless skin swelling. Infection leads to extensive destruction of skin with the formation of large ulcers. If patients seek treatment early, antibiotics are successful. Delayed treatment can cause irreversible deformity, long-term disability such as joint movement restriction, extensive skin lesions and life-threatening secondary infections.

The current Bacille Calmette-Guérin vaccine appears to offer only short-term protection. Scientists have been gathering details of the disease since 1998, lead by the Global Buruli Ulcer Initiative. They hope to develop a better vaccine and treatment. This partnership was formed by the World Health Organization, affected countries and research institutions.

A Spreading Disease of the Impoverished

The disease mostly affects poor rural communities where good medical record keeping is rare. Some victims stated that lesions developed from a bug bite, particularly after swimming or working around water.

Australian cases increased from 25 in 2004 to 72 in 2006. New cases are being reported from Cameroon, Congo, Gabon, Sudan, Togo, Nigeria and Uganda, WHO statistics show. Some patients have been reported in China, but the exact number is not known. Recent reports suggest that Brazil may be experiencing an endemic in areas bordering French Guyana.

Sites specializes in the ecology of aquatic insects, and is the author of numerous scientific articles. He has even had a Thai cicada named in his honor. He recently was presented the MU’s International Center award for excellence in study abroad programming for introducing students to ecology projects in Thailand.

In 2007, Sites announced results of a study that found 50 previously scientifically unrecorded water bug species in Southeast Asia – some so large that they could eat small fish.