Food scientists at the University of Missouri have developed a faster and more accurate way to test poultry and eggs for live salmonella contamination.

The DNA-based process provides results in as little as 2-5 hours versus up to five days for current testing techniques that culture samples in a Petri dish. The technique can allow the poultry industry to test for contamination before product is shipped, thus avoiding costly recalls.

Azlin Mustapha, associate professor of food science at the MU College of Agriculture, Food and Natural Resources, and Luxin Wang, graduate student, developed the process. They recently published their results in the Journal of Food Science. 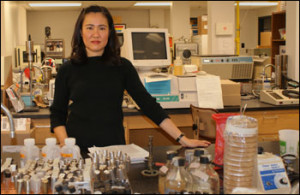 Their process modifies a DNA identification system known as polymerase chain reaction (PCR) which amplifies a few pieces of DNA to several orders of magnitude, generating thousands to millions of copies. Large clumps of salmonella DNA are more easily detected and accurately measured.

Such PCR testing for food has been around for years, but results were difficult to accurately interpret because it could not differentiate between dead and live salmonella DNA. Only live salmonella cells trigger the human disease of salmonellosis.

Mustapha’s modification adds a dye to the DNA sample before it is tested. Dead cells, with their compromised cell walls, absorb the dye. The PCR test can be set up to ignore dead cells and replicate any live salmonella DNA for detection.

The system can also test chickens. 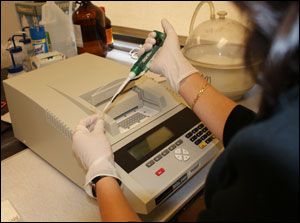 Azlin Mustapha's new technique to test poultry for contamination uses a PCR machine – a device that can accurately measure any contamination in hours.

Poultry and poultry products contaminated with salmonella have been implicated as a significant source of food poisoning. In a recent salmonella outbreak involving eggs, approximately 1,813 illnesses were reported between May 1 and October 15, 2010. A nationwide recall of eggs produced in an Iowa plant resulted. The recall emphasizes the importance of not only proper sanitation, but reliable product testing, Mustapha said.

Salmonella is the most common cause of food poisoning in the United States, according to the Centers for Disease Control (CDC). Salmonella can make people sick with diarrhea, vomiting, fever and abdominal cramps. Infants, elderly persons and those with weakened immune systems are more likely than others to develop severe illness. When severe infection occurs, Salmonella may spread from the intestines to the bloodstream and then to other body sites and can cause death unless the person is treated promptly with antibiotics.

The CDC reports estimates that approximately 400 persons die each year with acute salmonellosis. 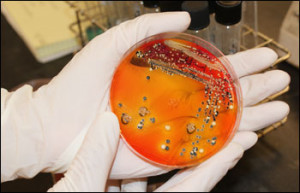 The new test is important because Salmonella contamination in poultry can be a difficult problem to address, Mustapha said. It can persist for a long time in both the spleen and reproductive tract of poultry. During the birds’ sexual maturation, salmonella can colonize both the ovary and the oviduct of hens, thus infecting all eggs produced as well as the chicken. This is why it is so important to properly cook poultry products, she continued.

Mustapha said poultry and egg producers wishing to adapt the new test will need to make an initial capital investment to buy a PCR machine and train personnel in its use. Once installed, however, the system requires less labor and time than conventional testing techniques, resulting in long-term savings, she said. Most importantly, she points out, potential pathogens can be found earlier in the production process – perhaps before the food leaves the processing facility.

The USDA’s Food Safety and Inspection Service and the Missouri Department of Agriculture have shown interest in the newly developed process.

An earlier version of Mustapha’s test can quickly detect E. coli O157 in beef products. The Missouri Department of Agriculture this summer adopted this process for its food safety inspections.