The drip torch bends slightly, engulfing the tall grass in flames. One student follows the flames with a water hose, ensuring the flames don’t escape the fire line; others snuff out the creeping fire with rubber swatters. They work as a team, slowly trailing along the edge of the prairie field as the flames grow larger, some taller than the crew. The flames move inward into the prairie as a lone rabbit quickly scurries out. 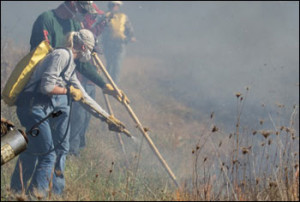 The smell of burning wood is acute as the wind pushes the rising smoke into the faces of the fire crew. Some students have covered their faces with a bandana, others work through it, tears streaming down their face. They were warned. “You’re going to suck up a bit of smoke,” David Haberl said earlier during the burn briefing. And he should know—he’s the Tiger Fire Crew president.

With close to 35 members, the Tiger Fire Crew aims to give University of Missouri natural resources students an opportunity for burn practice, which can be a valuable tool as they search for jobs. Gabe Waterhouse, a forestry student and a member of the Tiger Fire Crew, joined for that very reason. “I have only been on one burn, but I plan on doing as many more as possible,” he said. “This experience will be really helpful when applying for jobs.”

John Dwyer, associate professor in forestry, thinks this experience is crucial in developing a resume for potential fire management positions within different federal and state agencies. “I think the Tiger Fire Crew can play an integral role in helping our students realize their full potential in fire management,” he said.

To date, the Fire Crew has done three burns. Usually, they work with the Missouri Department of Conservation or Department of Natural Resources, and sometimes they burn for a private landowner.

All prescribed burns have specific goals, usually to improve or maintain the land. Some prescribed burns are used as field reduction, whereas other burns are used to help restore endangered species and strengthen ecological systems. Certain ecosystems can be heavily fire dependent, Haberl said. By burning the area to get rid of overrun species, it gives native grasses the chance to grow back, improving the habitat for species such as rabbit, deer and turkey.

On this particular burn, the Fire Crew is working closely with the Fires I class taught by Dwyer, who also acts as a faculty advisor for the Tiger Fire Crew. With four separate fields and a total of five acres of native warm season grasses to burn, every student will get a chance to work all of the equipment.

Before every practice burn, the burn plan is explained to each person assisting. Personal protective gear is also checked. Each member must have eight-inch leather boots, all cotton clothing, safety glasses and leather gloves. Even a participant’s undergarments must be cotton — synthetic material can be burned into the skin.

After the weather is monitored — relative humidity, wind speed and direction can all play a large role in the behavior of the fire — the group is split into squads and the burn begins. Often, smoke can interfere, despite taking precautions against it. While burning, Waterhouse tied a bandana around his nose and mouth to help prevent smoke inhalation. “It’s my least favorite part of burning,” Waterhouse said. “It makes it quite hard to see what is happening in the surrounding environment.”

Conditions such as this make good communication vital among the squads. Without it, a tragedy can happen. Squads work together to ensure the fire responds in the way that they want it to. One squad lingers behind and scouts for rogue flames while the other two move ahead and conduct the burn. When the burn is finished, everyone looks for any missed embers.

This chance for real experience is exactly why the Tiger Fire Crew began last spring. “Outside of the Fires I class, there’s no real opportunity for hands-on fire experience,” Haberl said. “We wanted to get fire practice in a relatively safe environment.”

Safety is the most important goal of any burn. Members must go through safety training and certification to participate on specific burns. There are three levels of membership within the club. Green level members can participate in prescribed burns under the supervision of forestry faculty, but not on MDC or DNR property.

After passing Missouri Level 1 fire training, members are considered to be at the yellow level and can work with MDC. Once a member completes all state and federal safety training and obtains their red card, they are able to get hired on by the Fish and Wildlife Service or Forest Service and burn out west, Haberl said. Getting the red card is a common goal among members. Eventually, Haberl would like to be a smoke jumper, and Waterhouse would like to be able to lead prescribed burns on his own land.

Currently, the Tiger Fire Crew is a subset of the Forestry Club and borrows most of its equipment from them. Eventually, it will become its own club. To break off, though, they’ll need to obtain their own equipment by raising funds. Brainstorming fundraising ideas is the newest goal of the club. Increasing the number of burns per semester to five or six is also another goal — one that Haberl doesn’t think will be a problem.

“We are growing by leaps and bounds right now,” Haberl said.

“I would hope that the Tiger Fire Crew might become a model organization for other forestry students interested in fire management.”