Scientists studying the ecological legacy of the 1986 nuclear disaster at the Chernobyl nuclear power station have found surprising evidence that some plants can adapt and even flourish in a highly radioactive environment.

An international team of scientists, including researchers from the University of Missouri, grew flax plants in a high radiation environment near the abandoned Chernobyl site and compared the seeds produced to those from plants grown in non-radioactive control plots. 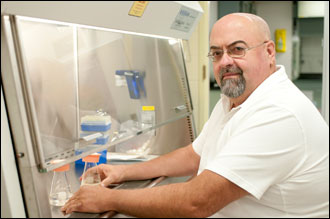 Ján Miernyk, co-investigator in the study to measure how certain plants have adapted to the high radioactivity near the Chernobyl nuclear disaster

The scientists found that the plants had adapted well to the radiation exposure. In fact, the exposure seemed to have relatively little effect on them, including protein levels that were only about five percent different from control plants, said Ján Miernyk, adjunct professor of Biochemistry at the University of Missouri and research molecular biologist with the USDA’s Agricultural Research Service.

The plant’s cell signaling, its chemical communication, was only slightly altered, too, suggesting to the scientists that plants can adapt their internal chemical processes to shrug-off radioactivity.

The plants grown in contaminated soil also functioned similarly to conventionally-grown plants, he said, save for relatively minor changes in their protein composition, stress responses and synthetic “machinery.” The research results were recently published in the American Chemical Society’s Environmental Science & Technology journal.

Soybeans Have Adapted and Even Thrive

Miernyk, a co-investigator in the study, said that this research builds on earlier studies of soybeans grown in the Chernobyl area. These tests showed that the agricultural plants adapted to the contaminated soil through relatively minor changes in their seed composition. In fact, some of the plants grown from the seeds seemed to thrive in the harsh environment. 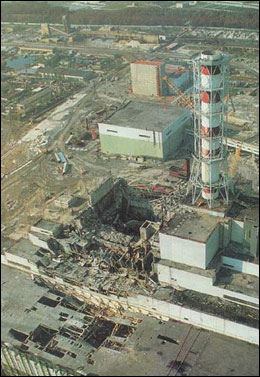 The Chernobyl nuclear main reactor after the disaster.

In that study, Miernyk and the other scientists learned that seeds adapted through numerous biochemical changes in response to an environment high in ionizing radiation. These included adjustments in dozens of proteins that normally protect against disease, heavy metals and salt stress.

The biggest difference between plants from the radioactive wasteland versus the non-contaminated soil was that levels of hundreds of proteins known to be involved in storage of reduced nitrogen in seeds had been lowered. In some cases, these altered characteristics stayed consistent for at least three generations of new plants, while other characteristics reverted back to pre-radiation exposure levels.

As a result of their adjustments, levels of Cesium-137 – one of the most dangerous radioactive contaminants – were remarkably low in the soybean plants. However, while the soybean plants were healthy and fertile, the seeds could not be made safe to eat due to what radioactivity was present. Future tests will determine how many generations it will take for the plants to be safe for consumption.

Flax Protects Its Seeds from Radioactivity

In the most recent test, seeds of a local flax variety, Kyivskyi, were sown in radio-contaminated fields of the Chernobyl region while control plants were planted in non-contaminated soil. The scientists employed two-dimensional electrophoresis and tandem-mass spectrometry to compare seed proteins from the two groups of plants.

Flax responded to the radioactive environment differently than did the soybeans. While soybean plants took up a small amount of radioactivity and distributed it fairly evenly throughout the plant including the seeds, the flax plants seemed to exclude some of the radioactivity from the seeds. 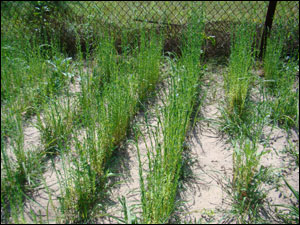 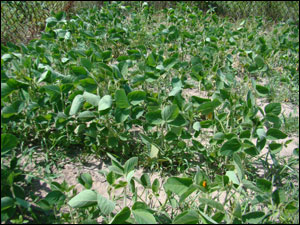 Soybeans grown in radioactive soil near the Chernobyl disaster proved to have a surprising ability to adapt to radiation.

The exact mechanisms for the adaptations are still largely unknown, Miernyk said. Further tests will be needed to identify more information on how the plants adapted and how these biochemical alterations may be used to help areas recover from nuclear disasters.

Martin Hajduch, a plant biotechnology expert with the Slovak Academy of Sciences, primary author of the study and a former member of the MU Interdisciplinary Plant Group, noted that the plants have shown a surprising and unexpected ability over time to adapt to an environment contaminated with radiation – a particularly significant finding given the scope of the disaster in its first few years.

The April 26, 1986 accident at Chernobyl was the world’s worst nuclear disaster. Four hundred times more radioactive material was released than in the atomic bombing of Hiroshima. Fallout was detected over most of Europe.

Among the 134 emergency workers who immediately responded to the explosion and fire, 28 persons died in 1986 due to Acute Radiation Syndrome and 19 more persons died in 1987-2004 from various causes, according to the World Health Organization. The WHO estimated that between 1991 and 1998 that there were 4,995 additional deaths.

After the disaster, four square kilometers of pine forest in the immediate vicinity of the reactor turned reddish-brown and died, earning the name of the “Red Forest.”

Animals in the contaminated areas also died or stopped reproducing. Horses on an island in the Pripyat River, six kilometers from the power station, died when their thyroid glands were destroyed by radiation.

Although the area surrounding the power plant remains substantially contaminated with long-lived radioisotopes, there is now preliminary evidence that biological recovery is possible, Miernyk said. Techniques may be developed from these research results that can help clean up future disaster sites.