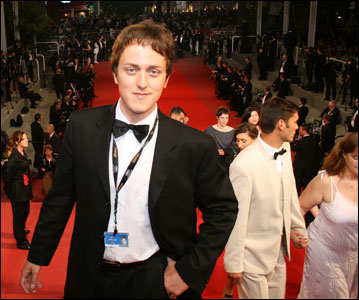 The first time Drew Stewart saw his comedy sketch show on television, he couldn’t help but feel a rush. From the first word he wrote to the last frame he edited, Stewart was thrilled to have created something the public would see.

What started as a hobby while at theCollege of Agriculture, Food and Natural Resources soon became a passion that led Stewart to the 2010 Cannes Film Festival. A part of the Real Ideas Studio program, Stewart joined student filmmakers from around the world to produce short documentaries which were later screened at the festival.

Stewart started in the MU biochemistry program, but quickly learned it wasn’t for him. One semester in, he switched to agricultural journalism and fell in love with the people involved. “It was the support they gave me to chase my ambitions,” Stewart said. “Their encouragements and willingness to say, ‘If you like it, let’s find some way to do it.'”

It was a visual media class that inspired Stewart to begin dabbling in filmmaking. Though he’d been writing comedy sketches with a friend, he had yet to film any of them. He always knew he wanted to be a screenwriter, but wasn’t quite sure if directing was for him. When his professor recommended that he volunteer for Columbia Access Television, he jumped at the chance — volunteering meant he could rent the cameras and produce his own comedy show.

Over the course of a month, he and his friend wrote 15 comedy sketches for their show, Illegally Downloaded TV (IDTV), a cheeky program full of the youthful internet culture. While it was originally produced for Columbia Access, Stewart pitched the show to the Missouri Students Association’s MUTV, where it settled into its new home and aired from late 2007 until Stewart graduated in May 2009.

After graduation, Stewart accepted a multimedia internship at the Victoria Advocate newspaper in Victoria, Texas. It was here that Stewart discovered his ultimate break, a story about a man with ALS, commonly known as Lou Gehrig’s disease. After visiting the man’s house to shoot a short video for the story, he realized the story was far from being told. An incurable disease, ALS affects motor functions and eventually causes death.

Even though the paper only needed a short, seven-minute video, Stewart knew this would be the story for his first feature length film. “Why not make a film out of it?” Stewart said, “Make something larger than I’d ever done before?”

He filmed more than 45 hours of footage from October 2009 until late March 2010. Only recently finished, “Breadth of Hope” was a life-changing experience for Stewart. “Even if the film never got made, all the footage was lost and everything I shot fell into an abyss, it still would have been one of the most beneficial experiences of my life,” he said.

Stewart finished the short video on ALS right before he applied to the Real Ideas Studio program at the Cannes Film Festival. It was the strength of this video that gave him the chance at being accepted, and Stewart spent most of May in Cannes directing a short documentary with a group of other student filmmakers. “Movie Marketing: Is the Net Working?” explored how new marketing tools, such as Facebook and Twitter, affect the way films are marketed.

Stewart spent the rest of his time in Cannes attending lectures on film software and techniques, watching films and networking with other talented, ambitious filmmakers. “Everyone there ate, slept, and breathed film,” he related.

Though Stewart didn’t see as many films as he would have liked, his time in Cannes was time well spent, albeit an intense experience, he commented. “It’s a good thing it doesn’t last for a month.”

The Future is Unwritten

Since the festival, Stewart finished “Breadth of Hope” and is trying to distribute it. He has faith in the film, and hopes to have it accepted into a film festival such as True/False or Sundance. Ultimately, he’d love to see it picked up by a cable television channel, where it will raise awareness and money — a portion of the proceeds will go to ALS research. “I’m proud to have a film that can help out in that way,” Stewart said.

Stewart, who is an avid explorer of movie genres, is excited about what his future holds. After working with documentaries — and even producing a thriller that also showed in the Short Film Corner at the festival — Stewart hopes to direct a “run-of-the-mill” fiction film, preferably returning to his comedic roots. “I have a lot of ideas and multiple scripts,” he said, “so it’s just a matter of which one to produce and where to do it.”

While Stewart is passionate about making films, he’s really just a film lover at heart, he pointed out. “If I had a billion dollars and never had to work, I’d just watch movies all day,” he joked. “And, maybe I’d make one movie a year.”