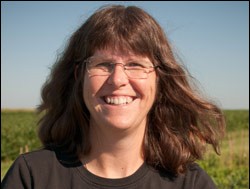 To cardiologists, there is no safe amount of trans-fat that a person can eat. The more trans-fat consumed, the greater the production of the bad cholesterol that damages the heart.

Trans-fat is created when liquid plant oils are engineered to a stable, non-perishable state through a process known as hydrogenation. Hydrogenated trans-fat lurks in most processed foods, including cookies, baked goods, popcorn, shortenings, crackers, doughnuts, chips and french fries.

A research team, led by plant scientists at the University of Missouri, has created a soybean variant that produces oil that does not have to be hydrogenated before going into food – adding no trans-fat.

The trick is to increase the level of heart-friendly oleic acid content in the soybean plant, said Kristin Bilyeu, a USDA molecular biologist and MU plant sciences adjunct assistant professor. She and J. Grover Shannon, professor of plant sciences, lead the research effort. 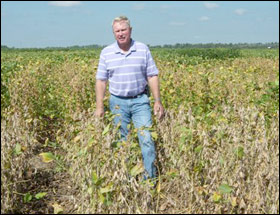 The research builds on research that Bilyeu started years ago to identify molecular markers of gene mutations which can be used in plant breeding to lower soy oil’s unstable linolenic acid.

While high-tech “gene silencing” has been used to trigger such genetic changes in soybeans, the USDA-university team used classical plant breeding techniques to “endow” their soy lines with these two genes. This approach could make these soybeans more marketable to countries that resist buying genetically-modified foods. More than $16 billion of soy beans were exported from the U.S. in 2009.

In 2008, soy oil accounted for 70 percent of all edible oils and fats consumed in America – underscoring the importance of reducing trans-fats in cooking, baking and deep-frying applications, Bilyeu said.

Bilyeu and a student assistant

The research results were recently published in BMC Plant Biology. Bilyeu and Shannon collaborated with scientists Pham Tung and Jeong Dong Lee. The research was funded by the USDA, the University of Missouri, the United Soybean Board and the Missouri Soybean Merchandising Council.

Additional tests are planned, though, Bilyeu said. The research team will next determine if the new soybeans can produce comparable yields to major varieties grown today.