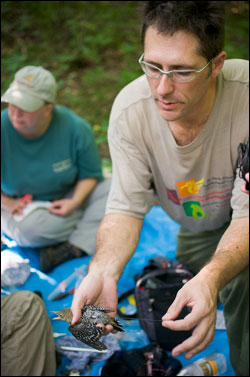 One would think that Missouri’s birds fly wherever they want. Research is showing that resident jays, woodpeckers and cardinals are not so free, however. They stick close to a home forest and avoid flying over large areas of clear space.

When the landscape is changed when trees are cut down or buildings built, these species can get boxed into smaller geographic areas. If the remaining forest expanse is too cramped to support the bird population, the species can become locally extinct. Isolated from other populations, birds can inbreed, resulting in offspring who lack genetic diversity and are more prone to disease.

Dylan Kesler, assistant professor in fisheries and wildlife at the University of Missouri’s School of Natural Resources, is studying how landscapes affect movement of Missouri’s non-migrating “resident” birds. This summer, he and graduate student Allison Cox radio-tagged 33 juvenile red-bellied woodpeckers in the Mark Twain National Forest, south of Columbia, to follow their movements.

They’ll track the birds’ daily flights via GPS and note their paths on a satellite plot of the area. The summer months are when the birds are most active, establishing territories and finding mates. The transmitters are designed to fall off the birds after four months. 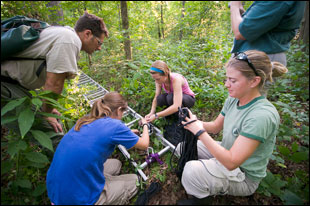 This year’s research follows previous work where Kesler radio-tagged juvenile red-bellied, red-cockaded and black-backed woodpeckers. He tracked their movements in one of the first systematic analysis of how these birds fly, feed and fight predators.

Those studies provided preliminary confirmation of what has been suspected by conservationists since the 1990s – that birds make landscape-influenced flight decisions along paths where they can immediately dive into tree cover to escape predators and readily find food.

The research also revealed that the birds avoid large areas without trees. Such exposure can make them easy pickings for predators. These open habitat features include roads, rivers and forest gaps, as well as other man-made landscape features where there is no easy cover.

Last year Kesler found that the birds only leave their home forested areas when they can follow “corridors” of trees. When these corridors are cut down, the birds essentially become stranded in a single location and populations become disconnected.

The 2010 research will gather more data on this behavior. The results will be published this fall in conservation-oriented science journals, and will be relayed to state and national conservation practitioners. The information can be used by urban planners and foresters to improve habitat and allow for the incorporation of tree corridors in their plans.

Kesler’s research with red-bellied woodpeckers is funded by a University of Missouri program to encourage young scientists. This research is an extension of Kesler’s earlier projects, funded by the USDA Forest Service and the U.S. Air Force, that addresses woodpecker movements in South Dakota, North Carolina and Florida. This data was designed to be shared with urban planners who will either encourage or discourage the birds’ presence.

Movement ecology is a new branch of biology that provides insight into the distribution, breeding potential and population health of wandering species, Kesler said. 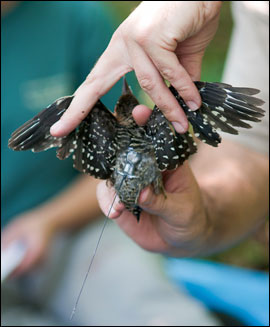 Kesler holding the bird to display the radio transmitter.

“Movements of individuals influence nearly every aspect of biology, from the existence of a single population to interactions within and between species,” he continued. “Movement determines where individual birds occur. How they spread across the landscape affects who meets who, which in turn dictates how their genes are spread.”

The research could provide important guidance for future conservationists if climate change, urban development or habitat change causes these non-migratory birds to relocate dramatically north or south to survive.

The research is also revealing insight about another new concept called natal dispersal. Natal dispersal is the period when an individual bird moves from where it hatched to another area where it breeds. Not much is known about what influences this dispersal. It may be swayed by competition for food or an instinct to improve breeding opportunities. Birds seem to make dispersal decisions based on what their siblings do, too, Kesler said.

“In many territorial resident birds, natal dispersal is the only time an individual makes a substantial movement from one location to another,” Kesler said. “Natal dispersal is, therefore, integral to gene flow between populations, colonizing vacant habitat, inbreeding avoidance and maintaining optimal population densities. However, little is known about natal dispersal behavior in any bird species, and even less is known about the proximate factors influencing how and when dispersal occurs.” 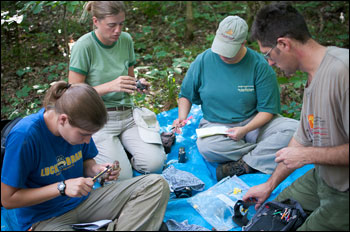 Kesler and his crew tag, document and photograph the birds before putting them back in their nests.

During this summer’s research, Kesler and his team hope to see if the woodpeckers return to their originating home site after searching for food or if they sleep in any place that is convenient. The 2009 research suggested that the woodpeckers flew almost two miles away, where they stayed for several hours, before they returned to their permanent home base. It appears that birds mapped the landscape and evaluated their breeding options through these repeated forays and explorations, Kesler said.

Male red-bellied woodpeckers were selected for the research as they hold territories year-round and show high loyalty to specific sites. Kesler believes that the woodpecker results can be generalized to other resident species. Kesler found similar patterns in other birds, including endangered Tuamotu kingfishers and Micronesian kingfishers.