Like big game hunting guides giving tourists a glimpse of African lions, a growing group of commercial storm chasing companies are providing people from all over the world a close look at tornadoes. Gaining in popularity since the movie Twister in 1996, these tours have become a regular part of Tornado Alley, following super cell storms and hoping to see a tornado. 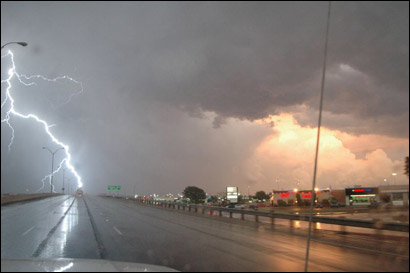 While others run away from severe weather, scientists and storm chasers drive toward them. Photo courtesy the University of Massachusetts Microwave Remote Sensing Laboratory.

Recently released research by the Department of Parks, Recreation and Tourism in the University of Missouri’s School of Natural Resources has provided the first demographic and socio-psychographic profile of these “tornado tourists.”

Surveys collected data from chasers at the end of organized tours in 2009. The research was directed by Sonja Wilhelm Stanis and Carla Barbieri, both assistant professors. Their team also included Jiawen Chen and Shuangyu Xu, who recently completed their Masters’ degree with the data.

The research team presented their findings at the 2010 Northeastern Recreation Research Symposium in New York to a national academic audience in the fields of recreation and tourism. The presentation introduced recreational storm chasing into the broader research on risk recreation and tourism, which includes skydiving, white water rafting, scuba diving and surfing.

Barbieri and Wilhelm Stanis found that tornado tourists are primarily middle-aged, single and highly educated. An interesting finding, Wilhelm Stanis said, is that most married chasers did not have children, which is inconsistent with their age.

Sixty-two percent were male and 38 percent were female. Slightly more than half of the storm tourists lived in North America and about one-third traveled from Europe for their encounters with severe weather. Thirteen percent traveled from Canada and almost 11 percent from Australia.

More than 90 percent of respondents said that they took the tour to enjoy nature’s beauty and power. They also wanted to learn more about tornado and storm dynamics and to be with people who have similar interests.

Interestingly, Wilhelm Stanis noted, recreational storm chasers said that they are not seeking danger as is usually portrayed on TV and in the movies. The vast majority respondents reported that they like to explore unconventional places and have exciting experiences rather than participate in risky behavior, Barbieri continued.

Who Are the Tornado Tour Operators?

The MU research team worked with five of the 22 companies offering storm chasing tours in Tornado Alley, the area from mid-Texas northward through Kansas and Minnesota and into Canada. 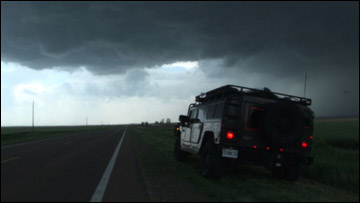 Most of these tour agencies have experienced meteorologists and trained storm chasers as tour guides who use sophisticated equipment to track severe weather events while on the road. Tours typically cost $3,000 to $5,000, which does not include meals or accommodations. Tour operators generally handle three to ten tours per season, with three to 15 customers per tour. The tour consists of long hours driving between tornado watch areas and lasts one to two weeks. Camera operators usually record the event as part of the package.

Most tours accommodate seven people in a van, although one enterprising operator uses an armored Humvee equipped with Doppler radar, a lightning detector and weather recording instruments.

Happy With the Experience

During their chasing tours, more than 95 percent of tourists reported that they had spotted at least one significant atmospheric event – with half seeing a funnel cloud and a third experiencing at least one tornado, Wilhelm Stanis said.

The chasers reported that they enjoyed their experiences and are inclined to spend more money on future tours. “Importantly for the continuity of this type of niche tourism, the majority of respondents recommend tornado chasing to others, such as their friends,” Barbieri said. 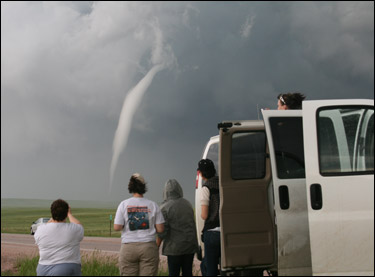 Wilhelm Stanis and Barbieri said that this level of satisfaction is important because word-of-mouth promotion emerged as this new form of tourism’s most significant source of marketing. Chasers want high degrees of satisfaction and seek out prior experiences of others as the best guarantor of that.

Barbieri and Wilhelm Stanis said that the data will give tornado tour operators and communities a better understanding of these clients. For example, by knowing that clients have a strong appreciation of nature and learning, tour operators can schedule educational classes during periods of blue sky.

The market for tornado tourism, though small, has increased steadily since the movie Twister and promises to keep growing, Wilhelm Stanis said.

The researchers expect tornado chasing tours to continue to develop as a sub-part of the Midwest’s tourism scene. “As a case in point, many of these tours fill up as much as a year in advance,” Barbieri said.

Wilhelm Stanis and Barbieri are already collecting data on the 2010 tornado chasing season for more a more detailed understanding of this niche recreational market.