Kathryn Womack’s graduate studies at the University of Missouri School of Natural Resources into the habitats of bats is quickly going from an academic pursuit to one that may play a role in saving the nocturnal creatures from an epidemic. 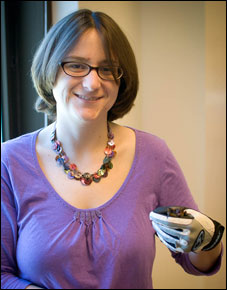 In April, a deadly and still mysterious disease that has wiped out entire bat colonies in the eastern US was found in caves north of St. Louis. The “Bat Community,” an informal network of scientists, academics, enthusiasts and governmental conservation agencies, is scrambling to find the disease’s cause. With her education in bat habitat and experience in rescuing sick and injured bats, Womack is helping in the effort to understand the disease and create a practical treatment plan.

A mysterious killer of bats

Scientists have named the disease the White-Nose Syndrome. WNS describes a white fungus, Geomyces destructans, typically found on the faces and wings of infected bats during hibernation.

The disease, identified in 2006, has had a devastating impact on eight species of bats. The US Fish and Wildlife Service estimates that there has been a 17.2 percent decline in the Little Brown bat (Myotis lucifugus) population from 2007 to 2009 in 16 states from Maine to Tennessee. Bat numbers in Vermont are down as much as 80 percent, the FWS reports. According to Bat Conservation International, a leading authority on bat conservation and research, WNS has killed more than a million bats in 11 states and Canada.

It was hoped that the disease would stay a regional problem. Unfortunately, diseased bats in Missouri were identified in a Pike County cave near the Mississippi River in April – a jump of 300 miles from the closest previously confirmed site in Tennessee. 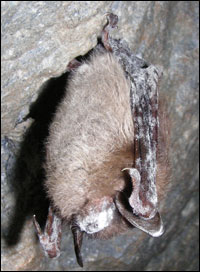 Little hard medical evidence is known about WNS, Womack said. Shy and nocturnal, bats themselves are mysterious creatures of which science has only sparse understanding. Bat social structures, lifestyles and migratory habits are only somewhat understood, she said, making any investigation into WNS even more difficult.

To stem the spread of the disease, which appears to be infectious through migratory bat-to-bat and human-to-bat contact, states have limited access by tourists to caves where bats are known to live. The Missouri Department of Conservation in May restricted access to caves on MDC lands.

There are more than 6,300 caves in Missouri with 74 percent of them privately owned. More than 500 are known to house bat colonies, but that number may be as high as 5,000.

Scientists think that infected bat colonies may have a mortality rate of 98 percent during the second year of infection, Womack said. The bats die of starvation during what is normally their hibernation period. The fungus irritates them and causes them to wake up more frequently than a healthy uninfected bat. Awake, they expend stored fat reserves needed to get them through the winter, she continued.

WNS can also cause wing damage, which eventually prevents the bats from flying to catch food. As approximately 12 percent of a bat’s carbon dioxide is expelled through its wings, the disease can also impact the bat’s respiratory system.

Womack, a native of Richmond, Virginia, came to MU to pursue her interests in bats and their habitats. She plans to earn a PhD in the field.

At MU she became a volunteer for Bat World Ozarks, a bat rehabilitation operation run by Sybill Amelon, known as the Bat Lady. Amelon has one of three state permits in Missouri to capture and rehabilitate injured and sick bats. Womack and Amelon respond to hundreds of cases and rehabilitate 20 to 30 injured bats per year, helping them fly back into the wild. Some bats whose injuries will keep them grounded are retained to give school kids a close look at an often misunderstood creature.

Police and governmental agencies call Amelon and Womack when hurt bats are found. Bats can be injured by fights with cats or get tangled in barbed wire fences. Generally, these bats are dehydrated and go into shock. Giving these small critters a subcutaneous injection of liquid solution is a skill that few, like Womack, have mastered. 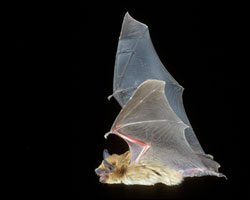 Womack said that finding a treatment for WNS will be tough as most Myotis bats die in captivity. Incredibly fragile creatures, they need very strict thermal and humidity conditions to survive, and few people are skilled enough to meet their requirements. Even though some bats have wingspans of up to five feet, most are smaller – some weigh as little as a paper clip.

Studying live Myotis bats will be critical to understand WNS. “This genus has six of the eight infected species in it,” Womack said.

Womack possesses other skills that will be needed to study WNS. In her habitat studies, Womack has successfully attached a small homing transmitter to the backs of the endangered Indiana bat to track their movement patterns during pregnancy and lactation. That study’s preliminary results are showing significant differences in habitat use and home range size between pregnant and lactating bats.

Womack’s bat handling and rehabilitation skills are currently being utilized by a loose confederation of scientists, conservationists and bat enthusiasts in the effort to understand WNS and determine a practical treatment plan. Her MU faculty advisors have incorporated her WNS studies into her larger bat habitat research.

Right now, she is involved in identifying the best method to keep bats alive in captivity long enough for fungicides to be tested on them. It is hoped that something simple like a medicine intended for cats and dogs may be a reliable treatment. Her knowledge of bat flight patterns is also providing clues on how the disease spreads from cave to cave. Womack’s MU study of bat diets using molecular tools may also give clues on the original of the bat disease.

Womack said that habitat studies are a key element in understanding WNS as there is evidence that the deadly fungus lingers in a cave even after the bat population has died. New bats entering the cave are quickly infected, she said. “This could have dire effects as many of the 12 species of bats in Missouri, which visit many caves during the fall swarm or mating period,” she said.

Effects of WNS yet to be felt

The full economic and ecological impact of WNS has yet to be revealed. Bats play a vital role in cave ecosystems, providing nutrients for other cave life through their droppings, or guano. More importantly, they are important nocturnal insect predators, Womack said.

Farmers will probably see the first impact, as bats are voracious eaters of insects. A colony of only 500 Big Brown bats can eat up to 10 pounds of insects per night, Womack said. Some Missouri caves have hundreds of thousands of bats. Fewer bats will means that farmers will have to use more pesticides, she continued.

The Missouri soybean and corn industry could be hard hit. The corn earworm moth, estimated to cost American corn and cotton growers approximately $2 billion per year in crop losses and control efforts, according to the USDA, is a favorite food for some bats. Mexican Free-tailed bats will ascend to as high as 10,000 feet to chomp on these migrating insects.