From nearby Rangeline Road, Bradford Research and Extension Center, east of Columbia, looks like any other typical Missouri farm. The metal buildings and greenhouses, however, use only a fraction of the energy of similar structures. And these energy saving secrets are just a mouse click away for all to see.

Tim Reinbott, superintendent of the center, part of the University of Missouri College of Agriculture, Food and Natural Resources, has added farm energy efficiency research to the 200 or so crop studies being conducted at the farm. His work concentrates on simple, cheap and practical changes that can save, in some cases, several thousand dollars per year. He demonstrates his discoveries to visiting farmers and posts the techniques online for others to evaluate. 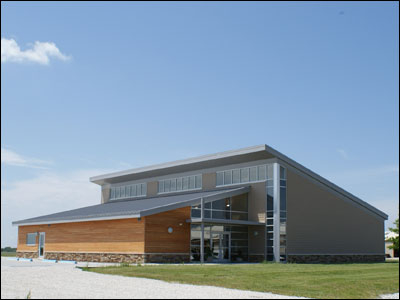 The Bradford Technology Transfer Conference Center is an example of how clever building design can save energy. The building’s large glass windows face south to collect radiant heat from the sun. Fans circulate the heat captured by the windows through the rest of the building.

In summer, the sun’s more westerly position sends very little heat through these windows. The building’s drywall, paint, carpet and other materials are recycled.

A nearby greenhouse also faces south to capture heat from the winter sun. Here, however, the energy is stored in water contained in 20 55-gallon barrels. This heat energy is released during the night to keep the greenhouse, where tropical plants are grown, at a constant 85 degrees.

The energy saving for this is not insignificant, Reinbott said. “In a typical winter, it would cost $800 in propane to heat the greenhouse to the same temperature,” he said. “Now, the only power we buy is electricity to run a small exhaust fan to keep the temperature from climbing too high.”

Reinbott said that his system can be scaled down for a homeowner’s greenhouses or scaled up for commercial operations.

Bradford’s Administration Building, typical of many old steel buildings found on Missouri farms, was an even greater challenge to heat in the winter. The poorly insulated building, built before the first energy crisis of 1973, often required $12,000 of propane to keep warm during the winter months. 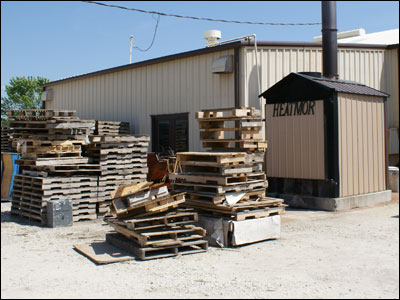 To save money, Reinbott changed the building’s heating source to a waste product littering the farm – used wooden pallets. Reinbott purchased a pallet boiler, a device that burns pallets like a wood stove and then transfers the heat to circulating water.

The move required a time commitment, however, as Reinbott has to feed about 10 pallets into the boiler every morning and then a few more during the day. After a storm, fallen limbs are chucked into the boiler, too. Bradford Farm’s neighbors drop off used pallets just to get rid of them.

The pallet boiler has brought the building’s winter energy cost almost to zero. “Metal buildings like ours are very typical on Missouri farms,” Reinbott said. “Most farms have excess wood that needs to be removed. We think that what we do is a very viable model for many operations.”

Another Bradford greenhouse is not heated by the sun or pallets but by corn.  Corn kernels, Reinbott said, expend roughly the same BTUs as wood pellets when burned in many commercial stoves. As Bradford grows corn and has excess each year, the energy source is virtually free. Generally, Reinbott said, the greenhouse can be heated for a winter on about 150 bushels of corn.

With the acquisition of an extrusion machine that can turn cut grasses into grass pellets, Reinbott will replace the corn kernels and burn what is a common waste product at the farm.

Corn, grass and solar at Bradford are joined by another energy source – geothermal.

Bradford’s pesticide containment building, which must be kept above freezing to keep stored pesticide from degrading, is heated from air drawn from several feet underground where the temperature is a constant 55 degrees. Like the greenhouses, the only “outside” energy used is an electric exhaust fan.

“We’re not looking to develop breakthrough technologies that are complicated and expensive,” Reinbott said. “Instead, we are looking to share simple, practical, self-sustaining and easy methods that can be adopted at minimal expense. We can all reduce our carbon footprint and save a little money. Our job is to do the research, build a prototype, and then share the results.”