Indulging in a glass of wine seldom conjures images of weeds. For the growing number of Midwestern grape growers cultivating their vineyards, such images come frequently to mind.

Midwestern grape growers work in the Continental Climate with its longer growing season and abundant rainfall – perfect for vigorous weed growth. In contrast, the Mediterranean Climate – the popular grape growing regions of California, Italy and France – is characterized by weed-unfriendly mild summers with little rainfall. 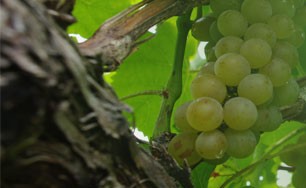 A patch of weeds is not stopping a renaissance of wine making in the Midwest, which has gone from nearly non-existent in the 1980s to 92 wineries producing about 888,000 gallons of wine annually, according to the Missouri Wine and Grape Board. Helping grow this industry – and now fighting weeds – is the University of Missouri, now entering its third growing season of weed research.

The weed effort is part of a larger research program begun in 2005 by the Institute for Continental Climate Viticulture and Enology (ICCVE) at the College of Agriculture, Food and Natural Resources to support Midwestern grape growers.

ICCVE is spearheading research designed to further spur the Missouri wine renaissance and put the growing industry on the connoisseur’s map. It coordinates MU wine research programs and communicates that knowledge through education, extension programs and an experimental winery. It soon plans to build its own vineyard to conduct research and teach Missouri students the skills of wine making.

Initial ICCVE research focused on disease resistance and pest management, but something was missing, R. Andrew Allen said. “We wanted to fill in the weed component of growing grapes. It’s the next step.”

Allen, extension associate viticulturist at MU, knew that there hadn’t been much weed research done for grape growers since the ‘70s and ‘80s. With the growing popularity of wine growing in the Midwest, weed problems were becoming an increasingly important economic problem.

“Weeds are definitely a major issue in the vineyard,” said Cory Bomgaars, who oversees the grape growing and vineyard operations at Les Bourgeois Winery, Rocheport, Mo. “The strategies of attack are not very well defined in our region.”

Reid Smeda, an associate professor in the division of MU Plant Sciences, is part of the effort and began his weed research at Les Bourgeois Vineyards. He chose a block of Vidal grapes in an established vineyard full of weeds – a great trial location.

While other Midwestern crops can tolerate a kill-all herbicide or a growth herbicide like 2, 4-D, which causes a plant to grow itself to death, grape vines can’t handle such aggressive herbicides because it harms the vine, Smeda said.

Another issue is that grapes are a perennial crop, Bomgaars added. If an application of herbicide harms one year’s crop of grapes, it harms future crops as well. Herbicides also make it harder to incorporate nutrients back into the soil.

The solution? Researchers identified 10 herbicides best suited for grape vines. Ten are needed because not every herbicide controls all weeds. Some are used to kill the weeds that are visible, called post-emergence herbicides. Residual herbicides, on the other hand, persist in the soil after application to prevent weeds from starting to grow. This multi-pronged approach tends to control the weeds better.

The application, they found, is also important. Backpack sprayers proved perfectly calibrated for the correct amount of herbicide.

Careful application of herbicides is important to keep the weeds from developing a resistance to the herbicides. Too many growers blindly apply a cocktail mix of herbicides to everything when it’s not really needed, Allen said. Because of this, part of the research program is to try and get grape growers to tailor application to the weeds present.

“We want to encourage growers to do two things,” Allen said. “First, scout the vineyard to see the weeds that are actually present and then select herbicides based on those. Second, they may need to delay herbicide application. Sometimes, the weeds present might not be a problem. Late winter or early spring weeds may pop up, but they’ll be gone before the growing season really starts. There’s no need to spray for those weeds.”

Learning to let winter weeds grow longer may actually be beneficial to the vine, Bomgaars said. Because there is a lot of moisture in the ground at that point in the season, the weeds soak some of it up. They also create a beneficial layer of organic matter in the soil.

The next step in Midwestern weed research, Smeda said, is to survey Midwestern grape growers to find out what weeds they are dealing with regularly. When results are in, findings will be used to create an extension bulletins with a description, photos and recommended eradication techniques.

So drink up, and don’t worry about anything but an enjoyable experience.