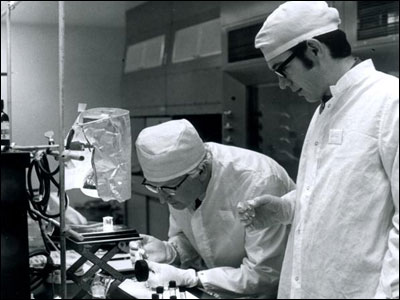 In 1969, Charles Gehrke was asked to sign a document that was unprecedented in human history – a waiver absolving the U.S. government from lawsuit should Gehrke contract an extraterrestrial disease by examining moon rocks brought back from Apollo 11. The University of Missouri Biochemistry professor signed the form immediately, then dug into the task of discovering the secrets of a heavenly body that could only be viewed from afar during centuries of human development.

Gehrke, who died in February 2009, will be honored on April 9 at the MU Bond Life Sciences Center McQuinn Atrium with a permanent display describing his work. He was also the founder of ABC Laboratories in Columbia, an organization involved in pharmaceutical development and chemical testing.

Gehrke was selected to examine the moon rocks because of his pioneering work analyzing amino acids, the critical building blocks of life. The chromatograph he used to search for life in the lunar samples from six different Apollo missions is now part of the Smithsonian’s National Air and Space Museum.

NASA knew little about the moon at that time. Some scientists were fearful that the lunar rocks would bring alien micro-organisms that would infect the researchers, sending them into permanent quarantine.

Gehrke was proud to be chosen to take that risk and helping to discover fundamental questions about what the universe was made of. “As a scientist,” he said, “there’s no greater honor.”

Gehrke stayed with the exploration of outer space even as the U.S discontinued its manned lunar missions by helping organize conferences on space exploration and the future of humans in space.

Gehrke was born Karl Friedrich Wilhelm Gehrke on July 18, 1917, to German immigrants. He earned his Ph.D. in agricultural biochemistry from The Ohio State University, finishing his studies in 1947. He took time off as a doctoral candidate to teach chemistry at Missouri Valley College in Marshall.

He came to MU as an associate professor of agricultural chemistry in 1948. Later, Gehrke became the manager of Experiment Station Chemical Laboratories. As a teacher, he advised 60 post-graduate students, hosted scores of visiting researchers and authored or co-authored nine books and more than 260 peer-reviewed articles.

Gehrke is known for his work to automate the gas chromatographic analysis of amino acids, boosting the efficiency of the process by a factor of 10.

In 1968, Gehrke co-founded Analytical Bio-Chemistry Laboratories and used his method to analyze amino acids for the agricultural industry. Gehrke earned the Association of Official Analytical Chemists’ most prestigious award in 1983 and served as the association’s president.

In the late 1980s, Gehrke retired from the biochemistry department to assist MU’s Cancer Research Center. He stayed there until 1993. The Charles W. Gehrke Proteomics Center in the Bond Life Sciences Building was dedicated in his honor in 2004.