There’ll be an unwanted side effect in switching American farms to large-scale biomass production for biofuel. 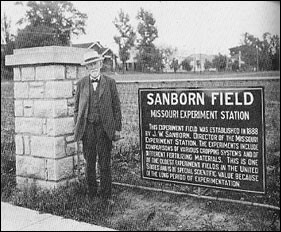 Removing almost all crop residue at harvest won’t allow carbon to return into the soil and rejuvenate it. No one knows the effects on soil quality for decades and even centuries into the future.

Randall Miles, associate professor of soil science at the University of Missouri College of Agriculture, Food and Natural Resources, is part of an international consortium of scientists assessing and predicting these effects before biomass planting and harvesting is initiated. Unfortunately, they don’t have decades to set up experiments and gather data.

To get results more quickly, the researchers are mining results from past long-term soil experiments. Data from these old tests could provide clues that could give scientists an idea of what residue removal levels are acceptable to maintain healthy earth for future agriculture.

In this, Miles has a secret weapon within sight of the Anheuser-Busch Natural Resources Building where he works – Sanborn Field. For almost 125 years, this research plot has been part of the MU College of Agriculture and the site of hundreds of experiments in crop production and soil quality. 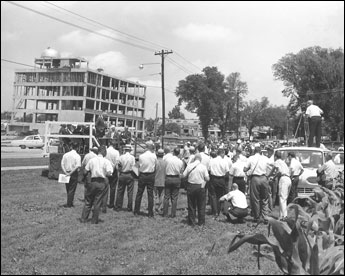 On average, soil organic matter is 58 percent organic carbon. Organic carbon gets into the soil through crop residues and other organic solids lying on the soil after harvest and decomposing. Plants also breathe in carbon in the form of carbon monoxide, sending CO2 into the roots and then into the soil.

Governmental initiatives would encourage massive sowing of biomass plants, such as switch grass, hemp or sorghum, as a way to reduce petroleum imports. Here, almost all of the above-ground plant materials are harvested to ground level to recover all biological material that can be converted into fuel. Unfortunately, this stops much carbon from returning to the soil.

A Missouri agricultural experiment since 1888

Sanborn Field was established in 1888 by J.W. Sanborn, director of the Missouri Experiment Station and dean of the MU College of Agriculture, to demonstrate crop rotation and the production of winter wheat. Later, corn, soybeans and sorghum were added to the research projects list. Most research studied soil changes, crop responses to fertilizer and tillage, and the effects of differing nutrient balances – all good clues for today’s long-term carbon sequestration study.

Sanborn is the oldest continuous experimental field west of the Mississippi River. Of the 45 plots, one is in the native prairie species common to mid-Missouri before the influx of European settlers – a perfect control sample. Nine plots are still involved in the original cropping program started by Sanborn, yielding 120 years of data of plant growth, human intervention and soil quality.

This old research is so valuable because of the records that have been kept for each experiment, be it the application of animal manure or the planting of clover, Miles said. Each intervention’s effects have been scientifically measured, and each crop harvest carefully recorded along with accompanying weather observations. For scientists like Miles, having such cause-and-effect data for almost a century-and-a-quarter is of immeasurable help in predicting how aggressive biomass harvesting could affect soil quality well into the 21st Century. 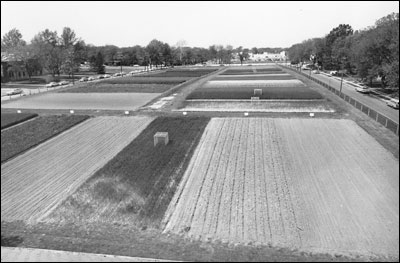 There are almost no farm lands in Missouri, or in the ag world, where such continuous long-term recorded research results exist, Miles said. Most Missouri agricultural land, he pointed out, has seen generations widely different planting, harvesting and fertilization management systems.

This means that Sanborn’s soil is a unique time capsule that is little changed, Miles said. No herbicide has ever been used on some plots. Most crops were harvested by hand or with modified small tractors, minimizing this variable on the research projects.

Sanborn is one of only a handful of research fields in the world that can supply this data. Others are the Morrow Plots at the University of Illinois at Urbana-Champaign, established in 1876 and, like Sanborn, was designated a National Historic Landmark; the Columbia Plateau Conservation Center near Pendleton, Oregon; and the 160-year-old Rothamstead Research Centre in Hertfordshire, UK. Scientists at these locations are Miles’ colleagues in the carbon sequestration study.

Three previous research projects are of particular importance in providing clues in how biomass production will impact soil quality, Miles said. One occurred when the field was used to measure the build-up of lead in soils before and after the changeover from leaded to unleaded gasoline. During the Cold War, accumulation of radioactive nucleotides and carbon from atomic testing was detailed.

Most importantly, between 1888 and 1949, all crop residue was removed for animal feed. “This research is very pertinent to what we are looking at in biomass production,” Miles said.

The Sanborn scientists also have “snapshots” of the soil at different points in the last century. MU researchers captured and saved deep core samples in 1915, 1938, 1962 and 1988. These samples have great research value as they show how much carbon was captured and retained both at the surface and below tillage level, Miles commented. Carbon nearer the surface trends to fluctuate dramatically with farm use while deeper portions reflect longer term trends.

These core samples have showed that most agricultural soils may have already lost 30 to 75 percent of their antecedent soil organic carbon pool, Miles said. The implications of additional carbon loss to future generations could be enormous, he continued.

Miles and his colleagues will publish their results this later this year in Agronomy Journal.