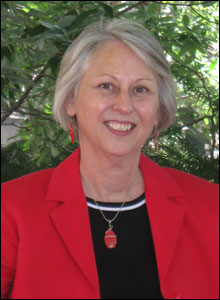 Judith Stallmann, professor of Agricultural and Applied Economics at the University of Missouri

Judith Stallmann, professor of Agricultural and Applied Economics at the University of Missouri, was named a Fellow by the Southern Regional Science Association.

Stallmann is one of only 20 Fellows named in the association’s 50-year history, and the first woman to receive the honor. When she received the award, Stallmann made a presentation at the association’s 2010 annual meeting on the role of institutions in regional science theories and analysis.

SRSA is a professional organization of economists, geographers, sociologists and urban planners who study regions and the factors that lead to similarities and differences among areas, including why some grow or decline. The SRSA Fellows program recognizes exceptional and sustained contributions to the field of regional science and service. Stallmann has served as a board member and president of the association.

Stallmann has joint appointments also in MU Community Development Extension, Rural Sociology and Public Affairs. She specializes in public finance, comparing state and local governments, the economics of small communities and how the local economy functions.

She earned her PhD in agricultural economics at Michigan State University in 1986, and taught public finance at universities in Guatemala and Nicaragua. Stallmann was a consultant to the Government of Honduras, the United States Agency for International Development and the International Labour Organisation. She is a former Peace Corps volunteer.

Stallmann’s research areas include state and local public finance, rural economic development and fiscal and economic impact analysis. She is currently studying the impacts of state and local tax and expenditure limitations on state economic growth.

Other research topics include the impact of retirees on the economy of rural areas, economic and fiscal impact analysis for small areas, educational incentives for youth, rural labor and family incomes, and part-time farming.

Stallmann has published in: The Marquette Law Review, The Review of Regional Studies, The Economic Development Quarterly, The Gerontologist, The Journal of the Community Development Society, Agricultural and Resource Economics Review, Choices, Youth and Society, Agricultural and Resource Economics Review, Women in Natural Resources, Society and Natural Resources.

She has served on the editorial boards of Review of Regional Studies, Journal of the Community Development Society, Review of Agricultural Economics and Choices, and is past president of the Community Economics Network and has served on the Executive Councils of the North American Regional Science Association and the Committee on Women in Agricultural Economics.