On March 25, children from Columbia will search for candy-stuffed Easter eggs after the sun goes down in the 2nd Annual Flashlight Easter Egg Hunt. This fun outing not only gives the kids something to look forward to, but it gives the MU Parks, Recreation and Tourism students the chance to give back to the community. 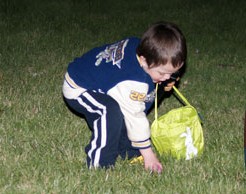 In 2009, the City of Columbia approached the PRT department about becoming a partner in this event. One of the program’s classes, Programming Development in Leisure Services, deals with learning about developing recreational programs for a community. Last year, the class helped plan the event for the first time.

“We didn’t know it would be that big of an event,” David Vaught, PRT department chair, said. “It started with 30 registered kids, and in one week it turned into 90. At the event, there were 150 children total, plus parents. It’s really a great way for our students to learn the organizational concepts of putting on a major event.”

A classroom filled with candy

The class is divided into varying committees, including marketing, developing the donor list, set-up and egg stuffing. Close to 2000 eggs will be stuffed with candy.

“So far, we’ve gotten 1600 eggs that have to be filled with candy, so we’re looking forward to a few hours of fun,” Pete Rolands, a senior, in the class said. “From what I know we’re still looking for more candy donations, but we’re hopeful that business leaders in the community will help us out.”

Greg Dyer, a senior in the class, is on the candy donation committee. Dyer is developing a spreadsheet so people know what businesses have already been asked and which have donated, eliminating the possibility of asking businesses twice. Nearly 250 lbs of candy have been donated so far. Learning how to communicate with donors is a vital part of the process students engage in.

“It’s not an easy thing to do, but it’s a good learning experience,” David Vaught, professor, said.

This kind of real world problem solving is what the class emphasizes. Students learn to expect the unexpected. Last year, the sun set later than desired. Students running the event had to hold back excited children from starting the hunt early. In the end, they had to let the younger children start early while the sun was still up.

“A lot of the decisions are made on the fly,” Vaught said. “The best plans don’t always work, and you don’t know it until it happens. The students get a good sense of the evaluation process in doing this because they can put it on and then see what they would’ve done differently.”

An event for real people

Developing a strong sense of community comes with the territory of running a city-wide event. Students in the class work hard because it’s not just for a class. It’s a real event with real people. Ultimately, working with the City of Columbia reinforces what the PRT program is all about.

“Working with the community is really the heart and soul of PRT,” Rolands said. “There are very few jobs available in the various industries that are supported by PRT graduates that don’t require at least some level of interaction with the community. It’s really a reaffirmation of what PRT is really about, and it’s just another reason why the PRT students are dedicated to whatever communities they happen to be members of.”

The hunt will start at 7:15 p.m. March 25 at the Reichmann Pavilion in Stephens Lake Park. Registration for the event goes until March 19, and it is $7 per child.