In December and January, a lingering snowy and cold snap engulfed much of America. While previous storms steadily moved over the country and out to sea, leaving moderate weather behind, this period of harsh winter weather came and stayed for weeks and plunged as far south as Texas.

The frigid and stagnant weather pattern confused many, but it didn’t surprise Tony Lupo, professor and chair of the atmospheric science department at the University of MissouriCollege of Agriculture, Food and Natural Resources. 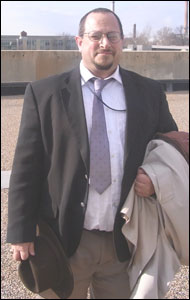 Last fall Lupo began a research project to investigate atmospheric blocking, a little known weather phenomena that leads to the stagnation of weather patterns. He wants to see if increased carbon dioxide in the atmosphere and resulting atmospheric warming will affect the onset and duration of future blocking events.

Two significant cases of atmospheric blocking have prompted research interest in this area. The first was the 2003 European heat wave. This stagnant pattern attributed to the deaths of 40,000 people over the summer season.

Weather patterns over the US follow a west-to-east route, pushed by prevailing westerly winds, the Jetstream and the rotation of the earth. 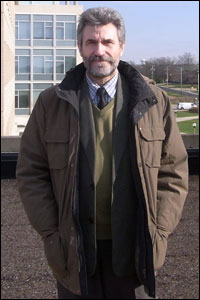 When blocking occurs, normal weather movement can stall for several days or even weeks. This allows for other movement in the atmosphere, such as cold air plunging down from the Arctic, to move much further than it would under normal conditions and persist.

In the case of the December-January block, a large high-pressure area had stopped near Greenland. Weather systems over America slowed or stopped as far back as the Pacific Ocean. Normal weather movement resumed when the high-pressure area finally weakened.

Blocking events can trigger dangerous conditions when tied to harsh weather, Lupo said. If hot and dry weather becomes parked, short-term drought conditions can result. A stationary rainy pattern could lead to flooding. In the case of much of the US in the winter of 2009 – 2010, particularly in the Midwest, the persistent pattern was unusually cold and snowy conditions.

Blocking can also can bring good weather, Lupo pointed out. A blocking event in 2004 brought prolonged sunny skies and pleasant temperatures to the Midwest. This resulted in excellent corn and soybean yields.

Only about 20-40 blocking events occur each year, making them among the rarest of weather events, Lupo said. The greatest frequency occurs over Siberia, east of the Urals. In America, the coldest winters on record are usually due to blocking. The unusual cold outbreak in April 2007 in Missouri that killed budding plants was due to a blocking event.

Current weather forecast models are of little help in predicting blocking events, even a day or two in advance, much less the 30 days of advance warning that forecasters would like to provide. Lupo hopes his research will add clues that would help fellow forecasters better predict blocking. 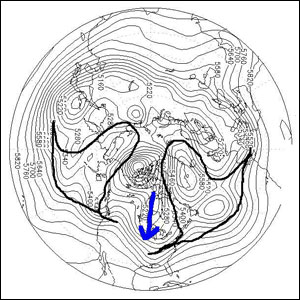 An International Effort to Understand Blocking and CO2

Lupo’s research is funded by the US Civilian Research and Development Foundation — one of only 16 grants awarded by the group this year. He is partnering with Russian meteorologists whose research is being supported by the Russian Federation for Basic Research. Lupo’s Russian colleagues, Igor Mokhov and Alexey Eliseev, both from the Obukhov Institute of Atmospheric Physics at the Russian Academy of Sciences in Moscow, visited MU in December — just in time to experience the US blocking event.

Lupo and Mokhov are probably the oldest hands in blocking research — both have been researching the subject since 1992. Lupo studied blocking in Russia as a Fulbright Scholar in 2004.

The scientists believe that heat sources — radiation, condensation, and surface heating and cooling — have a significant role in blocking’s onset and duration. In light of evidence that atmospheric carbon dioxide levels are increasing, it is thought that planetary warming could increase the frequency and impact of this contributing condition that creates atmospheric blocking.

“It is anticipated that in a warmer world, blocking events will be more numerous, weaker and longer-lived,” Lupo said. “This could result in an environment in which there is more storminess. We also anticipate that the variability of weather patterns will change appreciably over some parts of the world such as North America, Europe and Asia, but not in others.”

The research group will simulate blocking events using fluid dynamics computer simulations, Lupo said. Their first step will be to create accurate blocking models that mirror known blocking events. Then, the team will introduce differing CO2 environments into the models to study how the dynamics of blocking events are changed by increased atmospheric temperatures.

Lupo anticipates that the project will conclude in fall 2011 with the findings being published in an academic journal like the Journal of Climate.