Until just a few weeks ago, the Hardin family of Columbia, Mo. believed that James Hardin was shot down and lost over the English Channel during World War II and that his tombstone in an English cemetery was only a cross marking an empty grave.

A phone call from researchers investigating the crash of his B-24 bomber on April 22, 1944 not only rewrote that family history, but told relatives that a small town in Suffolk plans to honor Hardin and his fallen crewmembers with a stone monument on the 66th anniversary of the tragedy. 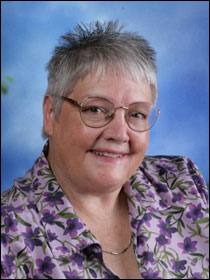 Townspeople still alive who witnessed the crash and who have commemorated the date each year, also invited surviving family members of the bomber crew to attend the monument’s unveiling.

Carolyn Heilman, administrative assistant in the University of Missouri’s Ag Information and Extension Publications department and James Hardin’s niece, will be among other family members who will travel to the UK this April to attend the ceremony. The event will close a chapter of a family history where all of the brothers marched off to war, with James Hardin never returning.

A Columbia Boy Swept Up By War

James was born and grew up on the family farm in the Brown’s Station area, northeast of Columbia. The family had seven sons and two daughters. All graduated from University High School, now Townsend Hall, part of the MU College of Education. All the boys were fantastic basketball players, Heilman said. “My grandfather, Dewey Hardin Sr., was the superintendent of the MU Power Plant and retired from there.”

James was an average but tall kid who endured the Great Depression. When war broke out he volunteered for the Army Air Force—one of the most dangerous assignments of the period. In the European theater of operations, skilled Luftwaffe fighter pilots shot down American B-17s and B-24s by the hundreds. A tour of 25 missions was a goal that most bomber crews never lived to complete.

A newspaper article written during the war stated that the Hardin family had the most area sons serving in the military during that time—James, Edward, Wesley, Lesley, Bill and Don served in the US Air Force, Dewey Jr. was in the US Army and Gene Hardin enlisted in the US Navy.

The B-24 was one of the workhorse bombers of the US Eighth Air Force in the Combined Bomber Offensive against Germany, forming about one-third of its heavy bomber strength, with the other two-thirds being B-17s. Thousands of B-24s, flying from bases in England, dropped hundreds of thousands of tons of bombs and incendiaries on German military, industrial and civilian targets. 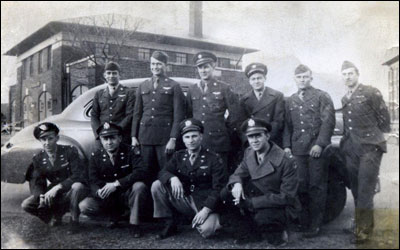 Hardin’s airplane was named the Repulser and was part of the 448th heavy bomb group based in Seething in Norfolk, just outside Norwich. The fatal flight, Mission 311, bombed rail yards at Hamm, a nerve center for the German transportation network.

After dropping their bombs, the American planes were pursued back to England by German single- and twin-engine fighter planes. English schoolboy Henry Bennett, living with his parents in a house on the seafront, recalled hearing the sound of machine gun fire and overstressed aircraft engines in the evening sky. 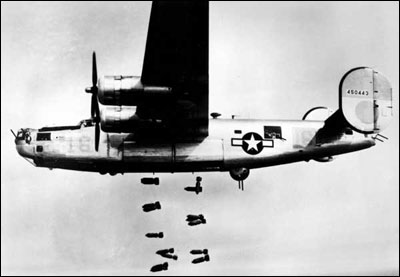 The B-24 helped was a mainstay of the strategic bombing effort against Germany. Photo courtesy U.S. Air Force.

After only a few seconds one of the approaching bombers, later identified as the Repulser, was lit with flames at the wing root — the fire rapidly spreading until all details of the aircraft were clearly visible. The plane began to turn and roll on its side in a dive at which point the entire wing with engines on the starboard side broke away and began to fall.

“All of this happened in very close proximity to where we were standing” Bennett recounted. “In fact, some small sections of the aircraft actually fell within our garden, whilst the main fuselage, wing, etcetera, were eventually strewn over quite a wide area of marshland some quarter mile inland.”

US military authorities recovered the bodies and carted off the wreckage. Staff sergeant James R. Hardin was buried in the Cambridge American Military Cemetery, situated about three miles west of the university city. Somehow in the confusion of war, details of the internment were scrambled on their way to Columbia. The Hardin Family hoped that James would somehow turn up alive and return home.

Each year, the people of this small town in Suffolk honored the fallen US airmen. Many particularly remembered the Repulser, an airplane shot down before their very eyes.

A Call From a Historian

Heilman learned true details about her uncle’s death and burial from a Michigan historian helping a man in England, Liam Martin, who was searching for family members of the downed plane. Liam was part of a group who wanted to erect a monument to the aircrew.

The fact that Hardin was actually buried in Cambridge was a surprise to Heilman and her family.

“The family thought that my uncle was shot down over the English Channel and never recovered. We thought that the cross erected in a cemetery in Cambridge, which a couple family members had visited, was just a marker…no remains. We now know that this is not the case.”

The historians involved in the Cambridge memorial also gave the Hardin family a copy of an autopsy report which described Hardin’s fatal injuries.

“I cried while reading the eyewitness accounts of the plane being shot down,” Heilman said. “It has been very emotional for all the brothers and one remaining sister. One of my uncles wished that his mom was still alive because she never fully accepted his death because there was no evidence that he was actually dead. I do not know why the Air Force did not share the information with my grandparents as it would have at least made the situation somewhat more real to them.”

Heilman said that her dad visited the gravesite in Cambridge a long time ago. “It would have meant more to him knowing that his brother had actually been buried there,” she said. 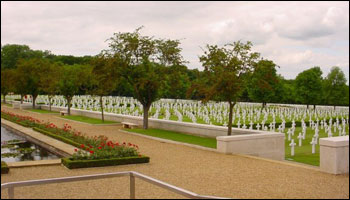 The family was given wartime correspondence written by Hardin’s parents to the military requesting that a monument be erected in Memorial Park Cemetery in Columbia. “The request was denied,” Heilman said. “The Air Force said that they would only pay for one monument and that one was in the Cambridge American Military Cemetery. My grandparents were financially unable to erect the gravestone by themselves then.”

Just a year ago, many of the eyewitnesses to the Repulser’s crash, with help from other interested parties, approached the local Parish Council to see if it possible to dedicate a memorial stone, near the site of the village war memorial, dedicated to the Repulser aircrew who died on April 22, 1944.

The Parish Council, responsible for the village war memorial, agreed, setting the ceremony for April 22, 2010, exactly 66 years after the fatal event.

“One of my surviving uncles expressed the wish that my grandmother could have had the true story as she always held the faint hope that my uncle was not dead and would one day walk through the door,” Heilman said. “The family has now procured a plot in Columbia Memorial Park Cemetery where James Hardin’s parents and one sister are buried. We’ll fulfill their wish to erect a memorial monument in memory of James Hardin who, we now know, was killed over Kessingland, England on April 22, 1944.” 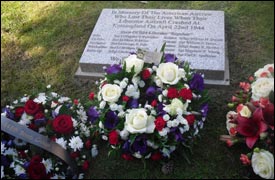 The volcanic eruption in Iceland that for six days grounded flights in and out of the United Kingdom kept Carolyn Heilman from attending the ceremony marking the 66th anniversary of the death of her uncle. European aviation officials stopped flights fearing the airborne debris would damage aircraft engines flying through the ash plume.

Heilman, administrative assistant in the University of Missouri’s Ag Information and Extension Publications department, was invited by witnesses who saw the crash of the B-24, known as the Repulser, on April 22, 1944. Witnesses and historians have remembered the crash of the bomber each year. This year they decided to dedicate a monument to the crash.

Details about the ceremony are available through the local newspaper.

Townspeople involved in the ceremony forwarded photos of it to Heilman. 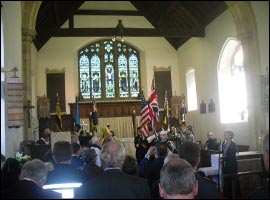 The ceremony at the St. Edmund's Church, Kessingland, included a US military honor guard. Kessingland is the village where the American bomber crashed.