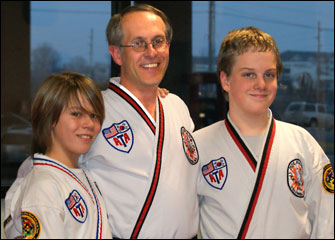 It’s never a good idea to mess with a professor in class. It’s even less of a brainwave to cross Ingolf Gruen, an unfailingly polite and soft-spoken University of Missouri College of Agriculture, Food and Natural Resources’ associate professor and undergraduate adviser chair. As an aspiring third-degree black belt in Taekwondo, he can deal with any undergrad who causes a ruckus.

Gruen has been a student of Taekwondo for six years, following his sons who started three months before him. He also teaches the sport and its philosophy of maturity and discipline.

Even if his idea of a fun afternoon is to break bricks with his bare hands, Gruen is an academic’s academic. He teaches analytical chemistry and its applications in food composition, flavor chemistry and the influence of food ingredients on quality attributes of foods. He’s begun a research project to make ice cream healthier with the addition of nutrients, probiotics and fiber.

Taekwondo, loosely translated from Korean as the way of the fist and foot, differs from other martial arts in its emphasis on jumping and kicking. It’s probably the world’s most popular martial art, practiced in 123 countries with more than 30 million enthusiasts. There are seven listed Taekwondo organizations in Columbia.

The sport combines self-defense techniques, exercise, meditation and philosophy. It has its roots in ancient Korea where it was thought that only mature, ethical and graceful people with a background in philosophy could be effective warriors and leaders.

His instructor’s rating didn’t help during his test last autumn for his third-degree black belt. During a demanding jumping kick, Gruen badly sprained his hamstring muscle, giving him a noticeable limp on his way to class. Now healed, he is nearing the time when he can again try for the certification.

A Detour to a Third-Degree Black Belt 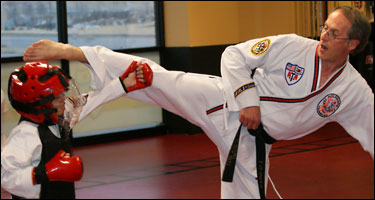 There are nine proficiency rankings in Taekwondo beginning with the white belt and progressing to the black belt. There are nine levels within the black belt—Gruen has earned the second-degree more than a year ago. Only two Korean masters have achieved the highest of all rankings—the ninth-degree black belt. Only one person is allowed to hold that position at a time. Grand Master Soon Ho Lee received the ninth-degree only after his brother and American Taekwondo Association founder, Eternal Grand Master Haeng Ung Lee, passed away in 2000.

Each degree level is more difficult to obtain than its predecessor. To be awarded a black belt demands skill in 81 separate moves involving precise and rapid foot and hand movement, Gruen said. In Taekwondo, achieving the rank of black belt means becoming a “serious student” who must also demonstrate effectiveness in moves such as breaking a specified thickness of a wooden board and successfully mastering self defense techniques against a sparring partner. Judges, who hold higher ratings, grade the applicant’s proficiency.

Gruen’s young teenagers, Ian and Toby, successfully tested for their third-degree black belts. Gruen, who followed them, didn’t have the same result—he sprained his hamstring while trying to break the equivalent of an almost four-inch thick board.

Gruen had successfully completed a series of proscribed moves and demanding jumping kicks. In one he ran toward and jumped over two obstacles, pivoting in mid-flight to break a board at belt level with the heel of his foot. 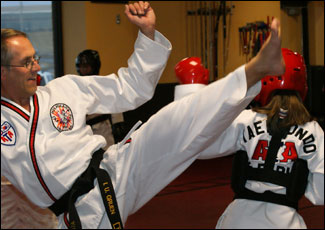 The last jump, the Jump Axe Kick, was the one that did him in. This technique involves facing a board at eye level and jumping vertically while swinging one leg over the head. Then, the foot comes down vertically so that the heel breaks the board.

Even though the move hobbled Gruen for weeks, he said that it wasn’t the hardest one that he has tried. Breaking a 2.5-inch concrete block with his “hammer fist” was more difficult.

Gruen got to try this during a good natured competition with his fellow instructors. Each member broke a brick with a hand technique of their choice. By the time the contest got to Gruen at the end of the line, only a 2.5-inch brick was left over.

“I was hoping that they would run out of bricks before they got to me,” Gruen said. Nonetheless, he successfully snapped the brick on his first try. “My hand hurt for weeks,” he said.

A Long Interest in Taekwondo

“I’ve always been interested in the martial arts, but hesitated on getting involved” he said. “As a teenager I was a puny guy. Back then, only body builders got involved in anything like this.”

Gruen has earned the ranking of a bu sabu nim, an assistant Taekwondo instructor. Here, he not only teaches the moves of the sport, but advises students—mostly kids with green and blue belts—how to develop into well rounded, respectful and happy people.

“Taekwondo is not just about how to kick, punch and jump,” he said. “It is a tool to help a person develop holistically and consider larger issues. For example, we explore what it means to be an honest and helpful person. We discuss the importance of humility and discipline. Taekwondo is as much of a group exploration of life and philosophy as it is a great workout.”

As a bu sabu nim, Gruen spends up to an hour before some classes discussing how to be a mature and insightful leader or how to clarify problems and create good solutions. He then demonstrates the mechanics of kicking and jumping. He serves as a sparring partner for many of the younger students.

“As you can tell from my vocation, I love to teach,” he said. “There is something very satisfying about bringing the physical, emotional and mental aspects together into one teaching moment.”

Always Wanted to be a Professor

Gruen grew up in Holzminden, Germany, a town of 25,000 located on the river Weser in Lower Saxony. It is known for its farming and the headquarters of a major flavor company.

He became interested in food science during undergrad nutrition internships at the University of Giessen where he worked at a dairy, brewery and the flavor company. After seven semesters in Germany, he came to the U.S. to study food science and chemistry—subjects that he found more interesting than nutrition.

Gruen earned his PhD at Virginia Polytechnic Institute. The future black belt’s dissertation was on the volatile compounds of menhaden oil and attempts to decrease the oil’s rapid oxidation characteristics. Before joining MU in 1996 he worked as a research scientist at the CEDRA Corporation, a bioanalytical and pharmaceutical service company.

Working at a university was a long time goal for Gruen. “I dreamed of being a prof ever since my second semester in college,” he said. “The interaction with students is the best part of my career. I consider myself a fairly social guy who likes human interaction and I get my greatest satisfaction out of helping people.”

So, undergraduates with a penchant for troublemaking, let the man be helpful. The alternative could result in a quite different outcome.