It’s well known that cholesterol-friendly, soybean-based food is good for our hearts. But few meat substitutes made from soy are raved about on the Food Network. While the ersatz materials can be made to taste like the real thing, they usually feel a little funny in the mouth.

That could change soon. Fu-Hung Hsieh, a University of Missouri professor of biological engineering and food science at the College of Agriculture, Food and Natural Resources, is finishing a project to create a soy product that looks, feels, pulls apart and, most importantly, chews like real chicken.

In the research, funded by the USDA and the Illinois-Missouri Biotechnology Alliance, Hsieh (pronounced “Shea”) is doing more than adding chicken flavor and food colorings to a lump of soy protein. He has developed a process that takes soy, something that usually chews like a lump of spaghetti, and simulates the fibrous qualities of a chicken breast. 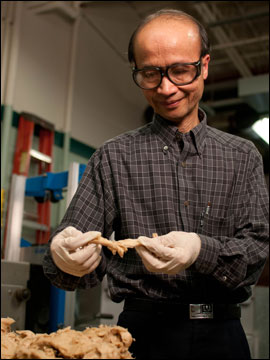 If picked up by industry, the product could provide shoppers a low cost alternative to the white meat. It would also allow consumers to more easily add soy—known for its healthy qualities—to their diets without giving up any dining satisfaction.

A Growing Market for the Meat That Isn’t

Even with its current pasta-like texture, there is a small but growing market for “soy meat.” TheSoyfoods Association of America says such meat “analogs” are purchased by vegetarians, chefs wanting faster preparation time, people with food allergies or shoppers looking for a cheap source of high quality protein.

The most popular soy analog is the soy burger, a low-fat, 125-calorie patty that closely resembles its red meat counterpart. Soy milk and soy cheeses are other alternatives that are lactose free and low in sodium—important to people on medically-restricted diets.

US sales of all soy foods were more than $4.17 billion in 2008. Meat alternative sales were approximately $620 million, an increase of 8.3 percent over 2007, according to Soyfoods: The U.S. Market 2009. From 2000 to 2007, American food manufacturers introduced more than 2,700 new foods with soy as an ingredient, including 161 new products introduced in 2007 alone. Once a cottage industry, soy products are being marketed by industry giants Cargill, Archer Daniels Midland and Kraft.

People wanting a healthy alternative to meat are gobbling it up. Soy analogs provide important bio-active components, such as isoflavones, which help maintain healthy bones, and prevent prostate, breast and colorectal cancers, Soyatech, a trade organization, notes. Soy foods are a good source of essential fatty acids and contain no cholesterol.

Fully Cooked, Right from the Extruder

Hsieh’s soy chicken recipe starts with soy protein isolate (SPI) and other minor ingredients. SPI is extracted from defatted soy flour. This slurry goes through a process known as “extrusion cooking.” Using water, heat, shear and pressure, the flour mix is pushed into a mixing cylinder and forms slabs or chunks. Colors and flavors may be added to the flour mix during processing. 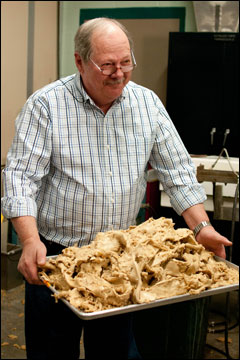 Hsieh’s twin-screw extruder, a machine ordinarily used to produce dry, ready-to-eat breakfast cereals, usually operates at 15 to 25 percent water, says Hsieh. “The soy protein-based, fibrous meat analog is different because we are working with a much higher moisture content, up to 75 percent,” he notes.

Exiting the extruder, the slurry becomes a dense and fibrous substance that assumes the shape of the die. It can be turned into granules, flakes, chunks, patties or steakettes, which are then frozen or dried in an oven. These pieces can be added to simple recipes like chili, fajitas, stews and pasta dishes.

To achieve the texture and “mouth feel” of chicken in something more sophisticated like a sandwich, Hsieh controls the water content of SPI and cooking temperature while in the extruder. He then uses a long cooling die to create the fibrous masses.

Early tests provided some stringy texture to the final product, but it felt more like soy turkey, a readily available staple for vegans wanting a traditional Thanksgiving feast. Turkey is noticeably less fibrous than chicken. In order to have a true chicken experience with soy, something more was needed.

Hsieh’s trick to a more realistic chicken started less than a year ago when he added fiber to the process. This provided the appropriately stringy material that tears into irregular and realistic coarse fibers—just like chicken.

“This also provides one more health benefit,” Hsieh says. “We all can use more fiber in our diet.”

Heated and seasoned like a fully-cooked chicken breast, this soy product can now almost fool a hardcore meat eater when the pickles, tomatoes and lettuce are added. Hsieh even knows how to add grill marks.

The next step will be to recruit graduate students to taste test various texture combinations to make final refinements to the formula so that it pleases the most number of palettes. This will provide an added bonus, too. Hungry students need to eat healthy, too.