While Mizzou football dreams of going to a national conference event, another University of Missouri team has already cleared its regional trials and is heading for a national competition. 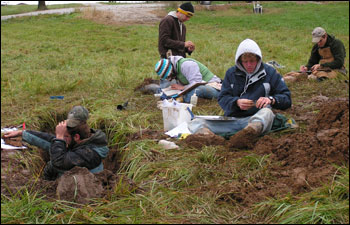 The MU Collegiate Soils Judging Team, made up of students who study how soil forms and reacts to various management scenarios, took a solid second place in the Region Five contest comprised of state universities in the central third of the country. The team in April will go on to the 50th Annual National Soils Judging Contest, sponsored by the Soil Science Society of America and hosted by Texas Tech University in Lubbock.

The regional contests give students experience in a wide variety of soil types—from the Harney silt loam of Kansas to the young glacial sediments of Minnesota, Miles said. The team is judged on its ability to identify how the soil will drain, retain water and support crops, and disperse pollutants like septic tank effluent. They evaluate the soil’s depth, its volume of rocks, the type of parent material, ability to produce runoff and surface landforms.

The regional competition in mid-October was held in Columbia and hindered by heavy rains. The competition started with the teams diving into 12 practice pits dug to reveal several types and strata of Missouri earth. Pumps were brought in to remove the water, leaving the competitors standing in ankle-deep mud while they studied the soil.

Because of the large number of variables in the makeup of soil, judging is as much of an art as it is a science, Miles said. Team members are judged individually and as a group. As Miles served as the regional contest coordinator, the MU team was temporarily coached by graduate candidates, Crystal Frey and Meredith Albers.

“In the team competition, members have to organize themselves and work out their differences in a consensus manner,” Miles said. “They have to present their thoughts in a rational way with supporting evidence, negotiate and support the final decision. This is an important step in making them professionals in the field and giving them solid, marketable skills that will set them apart from graduates of other universities.”