Autism, a brain development disorder characterized by impaired social interaction, poor communication and repetitive behavior, is little understood. Physicians and psychologists must use behavioral tests to diagnose the problem as there are no objective medical tests to verify if a child has the problem. 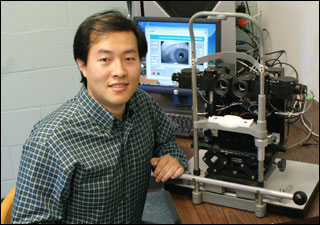 A recently-completed research study at the University of Missouri may someday lead to a definitive, easy and reproducible test. By measuring the pupil response in children known to suffer from autism and comparing the results with a control group known not to be afflicted, MU scientists have achieved a better than 90 percent accuracy rate in separating children with autism from unaffected ones.

Put into clinical use, this technique could give doctors a non-invasive tool to spot autism before behavioral symptoms begin and, perhaps, measure the progression of the disorder and monitor treatment. The research results may also suggest future studies to identify what functions in the brain break down and cause autism.

The research results were published in the Journal of Autism and Developmental Disorders. Xiaofei Fan, a recent Ph.D. graduate, and Gang Yao, associate professor of biological engineering at the University of Missouri College of Agriculture, Food and Natural Resources, were co-authors of the study with Judith Miles, the William S. Thompson Endowed Chair in Autism, and Nicole Takahashi, autism research specialist at Mizzou’s Thompson Center for Autism and Neurodevelopmental Disorders.

In the study, 24 children diagnosed with autism were tested with a computerized binocular infrared pupillography device that measured the length of time that it took for pupils to react to a 100-millisecond light flash. The results showed that pupils of children diagnosed with autism were significantly slower to respond than in a 44-member control group. Other tests showed differences in how the autistic group’s pupils constricted.

The tests yielded a 92.5 percent accuracy in separating a child with autism from the typically developing group, Yao said. 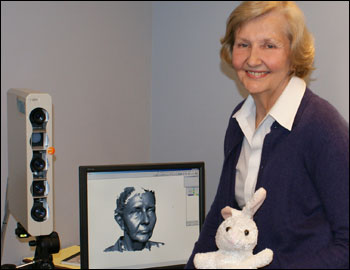 The tests measured pupil responses to light changes on a standard optical measurement scale called the dynamic pupillary light reflex (PLR). This measurement is used by ophthalmologists to quantify vision.

“No comprehensive study has previously been conducted to evaluate PLR profiles in children with autism,” Yao said. “In this study, we used a short light stimulus to induce pupillary light reflexes in the children under both dark-adapted and light-adapted conditions. We found that children with autism showed significant differences in several PLR parameters.”

A cause not yet understood

Autism seems to have a strong genetic basis, although its origins are complex and it is unclear whether it is explained more by rare mutations, or by rare combinations of common genetic variants. In rare cases, autism may be caused by agents that cause birth defects—drugs and environmental chemicals.

“It is unknown whether some prenatal or postnatal exposures to common environmental chemicals could be causing the increases,” she said.

Today, it is estimated that one in every 150 children is diagnosed with one of several forms of autism, making it more common than childhood cancer, juvenile diabetes and pediatric AIDS combined. An estimated 1.5 million individuals in the U.S. and tens of millions worldwide are affected by autism.

Government statistics suggest the prevalence rate of autism is increasing 10-17 percent annually. There is no established explanation for this increase, Dr. Miles said, although greater awareness, increased diagnosis of affected children and a broadening of the diagnostic criteria are some reasons being considered. 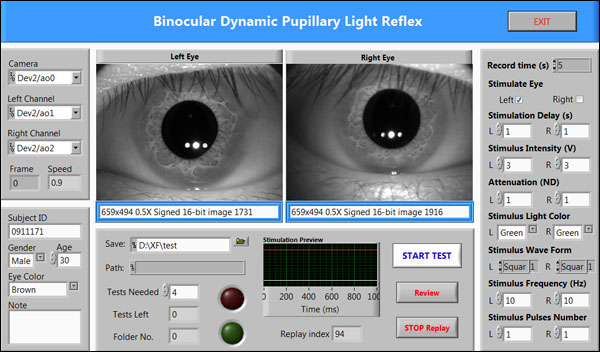 Boys are more likely than girls to develop autism and are diagnosed three to four times more frequently. Current estimates are that in the United States alone, one out of 94 boys is diagnosed with autism, Dr. Miles said.

Parents usually notice symptoms in the first two years of their child’s life. The signs usually develop gradually, but some autistic children first develop normally and then regress, making an accurate medical diagnosis tricky. Early behavioral and cognitive intervention can help children gain social and communication skills. There is no known cure.

As the cause and mechanism of autism is unknown, diagnosis is usually based on behavior. Under-diagnosis and over-diagnosis are problems in marginal cases. Typically, six symptoms—including speech, non-verbal communication, social interactions, imaginative play and repetitive behaviors such as spinning—are screened.

As the cause and mechanism of autism is unknown, diagnosis is usually based on behavior. Under-diagnosis and over-diagnosis are problems in marginal cases. Typically, six symptoms—including speech, non-verbal communication, social interactions, imaginative play and repetitive behaviors such as spinning—are screened.

The MU work builds on previous research that goes as far back as 1961. These studies noted sluggish pupil changes in children with autism trying to visually follow toys and people’s faces. Some research suggests that an inability of an autistic child’s brain to accurately process visual images is a possible partial cause for behavior and interaction difficulties.

The Thompson Center was launched in 2005. It provides diagnostic, assessment, treatment and training services. Biological Engineering is a joint effort by the College of Agriculture, Food and Natural Resources and the MU College of Engineering.

In October, the team received funding from the National Institutes of Health for the next phase of the research Researchers will test a larger population—100 children diagnosed with autism and a 100-member control group. This study seeks to amplify the earlier study’s measurements, look for any correlation between autism and other medical conditions including disorders in autonomic nervous system, and try to note brain abnormalities that could be a factor in a person developing autism.

The team of scientists are actively recruiting children with both autism and other non-autism developmental disorders to help with the research.