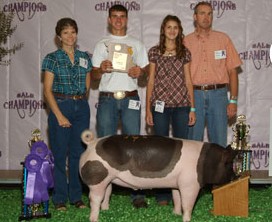 To support Missouri youth involved in agriculture, the Independent Aggies, a student group at the University of Missouri College of Agriculture, Food and Natural Resources, purchased Missouri’s 2009 champion hog for $19,000.

The transaction was part of the Fair’s annual Sale of Champions which raised $104,100 this August to benefit Missouri youth involved in agriculture. Since 1992, the Youth in Agriculture Committee has awarded over 300 scholarships totaling more than $230,000.

“This is something that the group has done for a number of years,” said Adam Keene, president of the Independent Aggies. “Every year we attend the sale and purchase either a grand or reserved champion of one of the species of animals. Once the meat is processed, we serve it at our various meetings and tailgates. We also donate meat to other functions and groups on campus.”

This year the group also purchased prize-winning animals at the Warren and Monroe County fairs.

“The mission of the Independent Aggies is the promote agriculture and we feel that it is important to start with the youth,” Keene said. “Purchasing an animal at the Sale of Champions is the best way that we know to reach a great number of youth throughout the state of Missouri.”

The 262-lb. crossbred hog was exhibited by Tyler Martin of Centralia, Mo. Several supporters of the Martin family helped the Independent Aggies with the purchase.