Does campus seem more crowded than usual?  It is no wonder as the 5,812-member Class of 2012 is a record at the University of Missouri.  That brings MU’s total enrollment to a breathtaking 30,000-plus.

The College of Agriculture, Food and Natural Resources is seeing its own surge.   This year’s undergraduate enrollment is a record 2,239 (preliminary figures).  With approximately 400 graduate level students, CAFNR accounts for just under 10 percent Mizzou’s total enrollment.

As for accommodating those new students, the university and CAFNR has done an excellent job, said Bryon Garton, interim associate dean and director of academic programs.

He said the College carefully planned for the influx.  While classroom space, resources and instructor workloads are tight in places, the academic year is proceeding smoothly with high academic standards and advising being maintained. 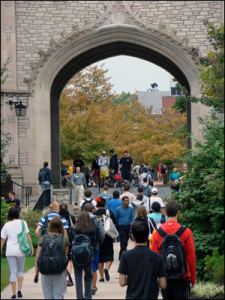 ment in CAFNR, and its peer institutions, has been a roller coaster ride since 1993.  From ’93 to ’99 CAFNR undergraduate enrollment rose significantly from about 1,900 to 2,193.  Then, probably because of a demographic quirk of fewer high school age people, numbers plunged to 1,923 in 2001-02.  Since then, the trend at CAFNR has been up while other agricultural and natural science schools have stayed soft.

The number of students receiving bachelor degrees from all colleges of agriculture and natural resources peaked around 1977 at about 24,000 and then declined to under 14,000 around 1988.  Since 1999, according to a national study by North Carolina State University, colleges of agriculture nationwide have experienced flat-lined or declining enrollment, even as agriculturally-related jobs have gone unfilled.

Garton said it is difficult to point to growth trends in specific CAFNR programs as there have been so many modifications within the curriculum.  Since 2001, however, there are increasing numbers of students in agribusiness management; agricultural systems management; animal science; biochemistry; food science and nutrition; hotel and restaurant management; and soil, environmental and atmospheric sciences.

Improved communication with potential students and their parents

The number one reason why CAFNR has seen enrollment increases while peer institutions have struggled is improved communication with potential students and their parents, said CeCe Leslie, CAFNR’s student recruitment director in the Academic Programs Office.

MU and CAFNR have overhauled their methods of reaching graduating high school students and parents through better coordination of publications, Web sites, letters and site visits.  The messages have been livelier with an emphasis on MU’s solid programs and lifestyle enhancements like the new and remodeled living accommodations, and recreation center.  The Mizzou brand image is also more consistent and dramatic now, helped in part by the For All We Call Mizzou campaign.

One-on-one engagement with students has improved, too.  For example, Leslie said, MU has recruitment staffers in Chicago, Dallas, St. Louis and Kansas City who give potential students personal attention with college and career information.

CAFNR’s outreach through field days at its farms and centers is another important contributing factor in this outreach, Leslie said.  The FFA Field Day at Bradford Research Center has grown from an attendance of 300 to more than 1,700 in the past five years.  The Southwest Center interacts with more than 2,500 high school students during their field day.

CAFNR’s Preview Mizzou, held each fall, has outgrown its traditional Memorial Union due to increased attendance.

Another indication of improvement in helping students better relate to the University and College is freshman participation in Summer Welcome, a two-day event in which students get one-on-one-advising, information about academic programs and tours of campus.

Leslie said that the improved communication is particularly important for CAFNR as many potential students won’t go past its name.  “We need to get the message out about the diversity of our programs,” she said.  “Potential students, particularly from urban areas, need to know that we have programs in restaurant and hotel management, atmospheric sciences and pre-veterinary medicine.  Many times urban students don’t know about the opportunities here because of CAFNR’s connotation with farming and animals.”

Leslie said that CAFNR can easily make a good case in attracting students because the challenges of the 21st Century—population growth, climate change, bioterrorism and diminishing water and land resources—are being studied in the college’s classrooms.  Many growing and cool career areas in global business and management can start in a CAFNR classroom.

Students are also attracted to the innovative ways of teaching in CAFNR.  Students eyes light up when the see video of CAFNR students in Thailand studying coral reefs.

MU is addressing the potential problems of rising costs of a higher education by creating new scholarships such as through the For All We Call Mizzou Campaign.  “Mizzou is still very affordable,” Leslie said.  “There are numerous programs to assist financially or to help students find on-campus employment in their areas.”

Garton said that the recent improvements to the MU campus have helped CAFNR attract more and better students.  “The new and remodeled dormitory space, the new recreation center and improved campus facilities are part of a 20-year plan to improve the campus and its living and learning environment,” he said.  “Additionally, the improvements to the other colleges, like the new journalism school facility, give us an important, if intangible, boost.”

Another intangible boost is the successful 2008 MU football team.  During a trip to New York City, Garton talked to a Times Square candy vendor who was enthusiastic about the Mizzou Tigers.  A cabbie was also a devoted fan, too.

Mixed in with these factors are what the students are achieving.  CAFNR’s students enjoy a more than 90 percent placement rate in their career field after graduation, said Stephanie Chipman, career services director.  CAFNR alumni are respected, and recognized, in many agriculture- and science-related professions, giving potential students a confidence they are making a wise choice when signing up with MU.

Many things are going well for CAFNR, Garton said.  “And you know, success breeds success,” he said.