The Lost Orphan Mine, in Coconino County, Ariz., sits just below the south rim of the Grand Canyon. While it hasn’t produced uranium since the 1960s, its location between Maracopa Point and Powell Memorial makes it a natural tourist stop.

Radioactive tailings from the site still contaminate the area. Worse, the residue has leeched into nearby Horn Creek. Signs warn people not to drink the water. Hikers traversing the canyon rim must detour around the abandoned structures and 1,500-foot-deep mineshaft.

Cleaning up such an area, like thousands of similar weapons-production and Cold War sites, usually involves digging up the polluted ground, washing it, and putting it back. The process is so expensive and troublesome that it is employed only in extreme cases. 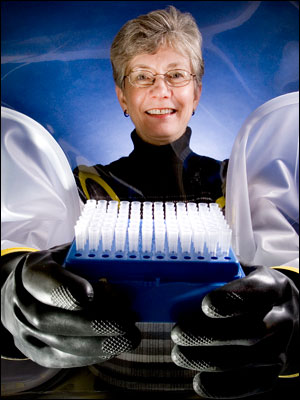 Judy Wall, a professor of biochemistry at the University of Missouri College of Agriculture, Food and Natural Resources, is working on an alternative way to clean up such sites.

Her laboratory, in partnership with the Lawrence Berkeley National Laboratory in Berkeley, Calif., is looking at eventually using bacteria to reduce toxic metals to inert substances.

But don’t get too close to the bacteria. They smell really bad.

“Have you ever come across a stagnant pool that smelled like rotten eggs when you disturbed it?” Wall asks. “Or have you wondered why iron pipes corrode in soil? Both the smell and the corrosion are caused by sulfate-reducing bacteria that derive energy not from oxygen but from sulfate, which is reduced to hydrogen sulfide, a particularly smelly and toxic gas.”

Sulfate reducers are powerful bio-corrosives. When they come into contact with heavy metals, they cause an electron transfer reaction that changes the metals in a fundamental way.

The bacteria can take uranium and, through this electron transfer, reduce it to uraninite, a relatively insoluble mineral. Uraninite will sink to the bottom of a lake or stream, where it can do no harm. Wall’s group is looking to better understand this water cleansing ability and to learn how long that modified material will remain inert. 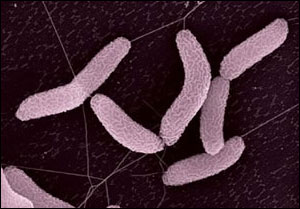 This potential has made the microscopic tilde-shaped critters a macro deal in the bio-remediation world. These bugs, or their close relatives, are likely to be already present in the contaminated sites—more than 7,000 heavy-metal-contaminated sites.

“We just need to add their favorite foods, depending on the site, to encourage them to interact with the metals,” Wall said. The Department of Energy estimates there are at least 5,700 contaminated water bodies that also could be helped.

But there are problems. The bacteria live in a narrow range of oxygen and temperature. In fact, oxygen can kill most of them, making them difficult to use at sites like the Lost Orphan Mine. The bacteria also prefer to live in microbial communities with diverse neighbors. “We have little knowledge of their subdivision covenants,” Wall explained.

“Our research with them must be carried out in the absence of air,” she said. “Obviously, none but the most committed and stubborn will work with them.”

Hold your nose; research in progress

Wall and her team are investigating the basic genetics and metabolism of these bacteria. They are building on discoveries funded by the Department of Energy’s Joint Genome Institute that has sequenced the genomes of about 14 strains and is working on a dozen more.

With a roadmap of the 3,570,858 base pairs of DNA from the bacterium—the focus of her efforts—Wall hopes eventually to determine what limits the growth and activity of the strain in its natural setting and how to avoid those limitations. Making sure that the interactions with heavy metals is sustainable and robust is another goal.

To answer these questions, the team needs to discover the basic ways that sulfate reducers work. “Are the electrons that change toxic metals actually intended for other essential functions in the bacterium? Can we alter the distribution and flow of electrons inside the cell?” Wall asks.

So far, Wall and her colleagues have identified a couple of genes that are critical to the remediation of uranium. A small step but an important milestone in understanding how the microbes work, she says.

The specific strain that Wall and her colleagues are working with is called Desulfovibrio vulgaris, a hairy bacterium that moves by a micro rotary motor. Desulfovibrio strains have been found in an incredible variety of habitats, including soil, the intestines and feces of animals, and both saline and fresh water.

One of their favorite homes is in oil wells and petroleum processing plants, where these bacteria contribute to massive corrosion.

But even this cosmopolitan lifestyle creates another puzzle for Wall and her team. There is always something in these varied environments that limits the microorganism’s growth. Even if an oxygen-tolerant strain were developed, it wouldn’t likely remediate something like the Lost Orphan Mine site without careful attention.

“Knowledge of the communities of microbes is still in its infancy,” Wall said. “We just don’t know a lot about a number of individual microbes.”