University of Missouri scientists have played a key role in developing new technology that takes the guesswork out of deciding how much nitrogen to apply to crops. The technology has the potential to keep money in farmers’ pockets and help protect the environment. 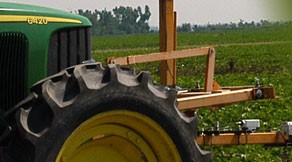 With “on-the-go sensing,” optical sensors mounted in front of a tractor or fertilizer applicator measure the color and size of plants. An on-board computer uses this data to control the rate that fertilizer is released as the farmer drives through a field.

Efficient nitrogen use has both economic and environmental benefits, said David Dunn, manager of the soil testing labs at MU’s Delta Research Center, a 1,000-acre research farm in the Missouri Bootheel.

“If excess fertilizer is applied to the field, that fertilizer can end up in watersheds, lakes and streams and cause problems there,” he said.

Traditionally, producers rely on testing soil or plant tissue to measure a field’s nutrient needs. But collecting samples from fields can take hours and getting results back from a lab can take days-time farmers can ill-afford to lose if plants aren’t getting enough nitrogen.

In addition, nutrient needs can vary considerably within a field, Dunn said.

“Traditional methods would give you a broad shotgun approach where you would manage 20 acres at a time with one test,” Dunn said. “Obviously, within those 20 acres, some areas are receiving too much nitrogen and some areas are not receiving enough.”

“The downside is that you have to take those images back to a computer lab, do a lot of analysis on them, take them to a fertilizer applicator and load them into his machine,” said Gene Stevens, MU Extension plant scientist at the Delta Center. “If a sensor is showing deficient nitrogen, the crop needs fertilizer right now, not a week from now.”

On-the-go sensors reduce that delay to a matter of seconds. “It allows us to take the lab to the field,” Dunn said.

Since 2004, MU researchers have tested on-the-go nitrogen sensing on almost 100 plots of corn at farms and agriculture research stations throughout Missouri. During 2004-2007, the use of on-the-go sensing saved an average of 24 pounds of nitrogen per acre.

Last year, persistent rainfall washed away a lot of the nitrogen that farmers applied before planting. In this case, cornfields treated by on-the-go sensing got more nitrogen than fields managed conventionally, but bigger yields more than made up for that, Scharf said.

Researchers at the Delta Center are adapting this technology for cotton. “In cotton production it’s very important to have the right amount,” Dunn said. Both too little and too much nitrogen will hurt yield.

In 2008, researchers worked with farmer Jim Stuever in Malden, Mo. Delta Center staff treated half of an 80-acre field with on-the-go sensing.

“On our half, we applied 45 pounds less nitrogen per acre and ended up with equivalent yields,” Dunn said. “The area we treated was much more uniform, making it easier to manage-easier to deal with insects, easier to irrigate, easier to harvest.”

The equipment for on-the-go nitrogen sensing isn’t yet widely available and won’t be cheap when it is, but the savings can be significant.

“That kind of efficiency keeps money in my pocket,” Stuever said. Treating Stuever’s field with on-the-go sensing saved about $15 per acre in reduced fertilizer costs.

Corn producers are impressed when they see the system in action, Scharf said. “It is a huge selling point when producers see the application rates go down while driving through dark green corn, then back up when they get into light green, stressed corn.”