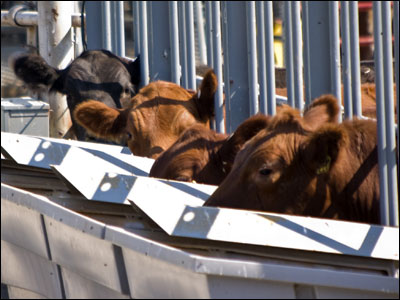 When corn prices increased from $1.50 to $4.75 a bushel, American cattle ranchers were hit hard with higher feed prices. Because feed constitutes approximately 60 percent of production costs, that price hike took many businesses out of the black and into the red.

Researchers at the University of Missouri may someday be able to help ranchers identify cattle that mysteriously have the ability to gain weight while eating less.

By breeding herds of these otherwise ordinary animals, farmers may be able to decrease one of their significant business costs.

Monty Kerley, a professor of nutrition in the Animal Sciences Division of the College of Agriculture, Food and Natural Resources, is leading the effort to study why these cows — some of which eat a third less than their pasture mates — are more efficient at using energy for maintenance and growth. At a research facility near Columbia, Mo., his team is monitoring the feed intake and weight gain of cattle thought to be more efficient.

A significant decrease in feed costs could have an enormous economic benefit for Missouri. Missouri ranks second in the nation in total numbers of beef cows in production, with more than 2 million cows on 68,000 farms. Revenue generated from cattle production contributes nearly $1 billion to Missouri’s economy annually. Over a 10-year period, the value of Missouri cattle production is nearly tied with the value of Missouri soybean production as the No. 1 commodity in the state. Beef enterprises are finding it increasingly difficult to compete in a global marketplace where large producers use economies of scale to be more profitable.

Some cows are just more efficient than others

Farmers have noted for centuries that some cows hit weight targets while eating less than their herd mates. These efficient cows seemed identical to others of the same breed. It was not until science began to understand cell biology that an inkling of a reason began to appear.

The first research on the subject was published in 1963 by the University of Nebraska-Lincoln. There, experiments confirmed that some otherwise average cows gained more weight even though they were fed the same amount of feed as other animals.

That research was picked up years later in Australia, where it was determined that superior weight gain per a set amount of feed was an inheritable trait that could be passed on to offspring through selective breeding.

More recently in North America, researchers conducting bovine genetic research have confirmed that DNA influences weight gain. Their research indicated that, theoretically, it may be possible to produce cows that require 40 percent less feed per unit of weight gain. 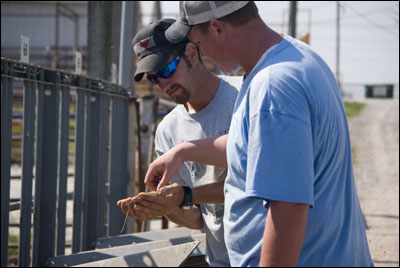 “We would love to go to the rancher and say, ‘Hey, we can reduce your feed cost 40 percent with the same weight gain,'” said Kerley.

Two years ago, MU researchers started looking for the specific biological phenomenon that creates feed-efficient cattle. With knowledge of the genetic mechanisms, they hope to create a practical plan that farmers can use to breed feed-efficient herds.

They are testing animals specifically bred to have this efficiency trait at MU’s South Farm Agricultural Experiment Station, a research facility located south of Columbia.

For feed efficiency, look into the cell

All biological functions in an animal are regulated by ATP. It has been called the most widely distributed high-energy compound within mammals. About 50 grams of the stuff can be found in humans at any one time. ATP supplies energy for the body to perform work, such as muscle contraction, and for the cells to synthesize the multi-thousands of types of macromolecules that the cell needs to exist.

Like the way a high-energy sports car’s use of fuel differs from that of a dump truck, some animals have mitochondria that synthesize ATP faster and more efficiently than that of other animals. Researchers believe animals that synthesize ATP faster reach satiety sooner because their energy needs have been met. When satiety is reached, the animal stops eating because it is no longer hungry.

MU scientists are determining whether rapid ATP synthesis is caused by differences in the proteins that make up the electron transport chain. If these differences can be determined, this knowledge could help ranchers to breed the more efficient cows.

The researchers think that they know the genetic traits of the more efficient cows. The next step is to verify the data.

A herd of potentially efficient cows is being studied at MU’s South Farm to determine just how feed-efficient they can be. To do this, the researchers are precisely measuring what the test cows eat and drink compared to their weight gain. 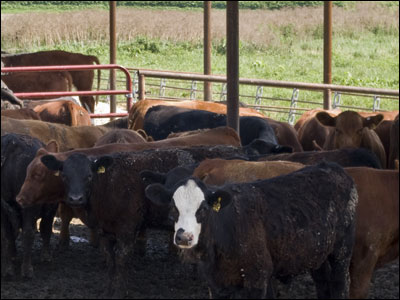 Conventional methods of measuring feed intake and periodic weighing wouldn’t yield the precise data needed, Kerley said. So, each cow carries an electronic identification tag attached to its ear. When the cow ambles over to a feed bunk, a computer notes the time of the cow’s arrival and departure and how much feed the cow ingests.

When the animal drinks, it stands on a scale that automatically keeps track of its weight. All data are collected on a spreadsheet and then used to calculate residual feed intake – a measure of metabolic efficiency. Ordinary cows are measured as a control group.

The feed/weight system at MU is the only one of its kind in North America. MU animal-science students help coordinate the research, giving them theoretical and practical knowledge in gathering and evaluating such data.

It will take almost two years to gather enough data to verify that the test herd has greater efficiency.

Kerley noted an interesting side benefit to making cows more feed efficient. When feed intake is reduced, methane emissions and manure production decrease, too. “There is almost a linear relationship,” he said.

That, Kerley said, has fascinating prospects for commercial agriculture.

“If ‘cap and trade’ regulations, in some form, become part of America soon, it is likely that cattle producers will have to defend themselves against claims of methane emission by ruminants if they wish to stay in business,” Kerley said. “If a farmer can demonstrate reduced carbon production, then he or she might be able to ‘sell’ pollution credits to an energy producer, like an electrical power plant. That will provide the farmer one more income stream.”